This piece first appeared on the Wild Oceans website

As fishermen, we are inherently curious about the fish we pursue. Where are they going? Where are they coming from? Why do they behave in certain ways? As passionate as we can be in wanting to learn more about our fish, many of us are equally passionate about wanting to protect our fish and ensure that they are around for generations to come. Sometimes these two passions come together, and indeed that is the case with an exciting new multi-year billfish project that Wild Oceans has just launched in the Pacific – The Kona Project.

As we have reported before, North Pacific striped marlin are depleted ocean wide, and all species of Pacific marlin are in need of better protection. Meaningful conservation is hampered in part by our lack of knowledge about billfish reproductivity, spawning grounds and nursery habitat. However, therein lies the opportunity. It may just be possible to improve management by better understanding these things, identifying habitat in need of additional conservation measures and championing better protection for marlin using this newfound information. This is the impetus behind the Wild Oceans Kona Project.

Kona-based Wild Oceans Board member Captain Jody Bright has been active in the world of big game fishing all his life. He grew up in Texas where he first got the offshore fishing bug after catching a sailfish while in grade school. His family was one of only a handful of families game to venture far enough out into the Gulf to catch billfish in the days before GPS and when Loran-C was just getting started. Since that time, Jody has traveled the planet as a respected crewmember and captain, fishing for marlin in some of the most remote regions of the world. Along the way he also created a series of successful fishing tournaments and through various conservation efforts, does what he can to help protect a fish that helped shape his life.

In the 1990s while supporting the research of Dr. Mike Musyl in deploying Pop Up Satellite Archival Tags (PSATs) on marlin, Bright also worked with Andrew West – an Aussie working on his Ph.D. in Kona, studying juvenile billfish captured in local current slicks. The work of now Dr. West has been expanded in further scientific studies conducted in near shore waters and slicks, but no one has of yet taken a comprehensive look at the dynamics of billfish larvae discoveries, reported spawning locations and how they are distributed throughout the waters of the main Hawaiian Islands, the Cross Sea Mounts and beyond. 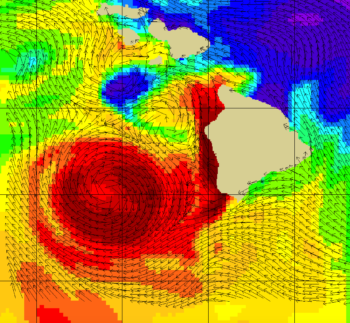 Dr. Musyl and Bright started to discuss how to approach a more comprehensive effort to understanding the dynamics of the entire system, and when Jody relayed these conversations to me, I began to get very excited.

The “Kona Gyre” is the eddy system created in the lee of the “Big Island” of Hawai’i when trade winds and the equatorial current get squeezed through the channel that separates Hawai’i and the island of Maui (known as the Alenuihaha Channel) and wraps around South Point (which incidentally is not only the southernmost tip of the Big Island, but the southernmost point in the United States). In the lee of Hualalai and Mauna Loa volcanos, they form a dynamic eddy system. Hawai’i is the largest “boulder in the stream” in the entire north Pacific Ocean and at over 4,000 square miles, you would have to go all the way across to the Philippines to find an island this large. This “gyre” is the dominant eddy for more than 5,000 miles of open ocean, creating one of the most, if not THE most, important spawning grounds for a number of pelagic species in the Pacific.

The Wild Oceans Kona Project is a comprehensive effort to advance our understanding of this crucial system and the conservation of Pacific billfish. It has three components: research, management and outreach.

Research, arguably the most intriguing part of our project, will be led by Dr. Musyl and his team. Dr. Musyl is the owner of Pelagic Research Group LLC. He is a recognized expert in PSAT studies and methods to quantify post-release mortality in billfishes, sharks and turtles. He was awarded a Ph.D. in population genetics and fish ecology from the University of New England (New South Wales) and earned an M.A. in fisheries biology from the University of South Dakota. Our research goals are to:

Longlines, both deep-set and shallow-set, catch more marlin than any other fishing method. While most longliners do not target marlin, they are caught incidentally and kept and sold at market. The non-selectivity of industrial longlining is at the root of marlin population depletion. International and domestic efforts to reduce commercial catch of marlin rely exclusively on catch limits and have proven to be insufficient.

Primarily through the efforts of Wild Oceans Pacific Program Director Theresa Labriola, we will expand on the work that we have been engaged in for years to push for more effective management of billfish stocks in the Pacific. We will first begin by building a coalition of partners to advance domestic striped marlin management measures that address the U.S. relative impact on the overfished stock and to secure international support for a striped marlin rebuilding plan. We will then monitor the domestic and international rebuilding plans, identify measures to further improve the plans, and push to extend similar protections as needed to other Pacific billfish stocks, such as blue marlin. Finally, we will apply the information learned from our research to improve domestic and international management.

Informing and Engaging Our Community

We can generate the momentum needed to affect change by engaging others and communicating our findings through a variety of media. As part of this effort, we will disseminate our discoveries and engage partners and stakeholders. A comprehensive web-based platform will be used to centralize information on Pacific billfish stock status, domestic management, conservation measures and threats, current research, and future research needs. The platform will be our primary means of communicating with constituents, coalition partners and fishery managers (domestic and international). The website will also feature regular project updates.

By researching and understanding gaps in our knowledge of billfish life history, we can advance more successful domestic and international management strategies to protect and rebuild marlins. The Wild Oceans Kona Project seeks to inform holistic conservation-based management strategies, including those that protect spawning stocks, with the ultimate goal of achieving healthier billfish populations and better fishing opportunities for small boat fishermen and anglers across the Pacific.

Rob Kramer is president of Wild Oceans.
View all posts by Rob Kramer →