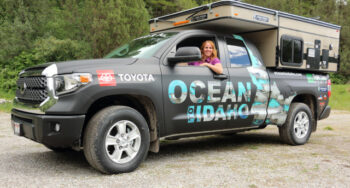 I’ve known Kris Millgate, CEO of Tight Line Media, for almost nine years. We met when I was executive director of the Outdoor Writers Association of America. We’ve become close friends, and I’ve followed her career with great interest. Last year our worlds overlapped again when she set out to film the 850-mile migration of salmon from the coast of Oregon to the Yankee Fork of the Salmon River in the wilderness of Idaho.

As you will see below in the trailer to her film, Ocean to Idaho, she tells an amazing story of what migrating salmon encounter as they return from the sea to their spawning beds on the Yankee Fork.

But Millgate never does anything halfway and this excursion was no exception. In an informative and entertaining narrative of her adventures, Millgate gives us a behind the scenes look at what it took to make the film. Millgate’s new book, My Place Among Fish, is the sequel to her first book, My Place Among Men, published in 2019.

Millgate chronicles her solo travels during the height of the COVID-19 pandemic. A trip that proves to be more challenging than she expected. It is a story of how she chases salmon migration from the ocean to Idaho. And the many challenges, including physical ones, she encounters along the way.

“Migrating salmon take a beating coming home and so did I,” said Millgate, a journalist for 25 years. “Broken cameras, bruises, stitches and skin cancer. I wasn’t expecting any of that. I was as worn out as the fish by the time we made it to mile 850, but we did indeed make it.”

She tells not only the backstory of her film but gives the reader an in-depth look at the challenges facing one of the most iconic fish in the Pacific Northwest. We are fortunate that someone of Millgate’s talent and perseverance took the time and made the extraordinary efforts to tell the story. But it should not, cannot stop there.

“Everyone is going to have to lose something if we expect salmon to gain anything,” Millgate said. “Opposing sides are realizing that and that’s why I’m optimistic about what’s to come. We can save what we’re losing. I know we can. We’ve done it for bald eagles. We’re doing it right now for grizzly bears and we will do it for salmon. The fish are not done yet. We are not done yet.”

You can learn more about Millgate’s books and the Ocean to Idaho movie at Tightline Media.