By nature, sport anglers must be optimistic; otherwise, we would have given up our sport long ago. That’s not so true for society as a whole, but given the cards we were dealt in 2020, and the political unrest we are seeing in 2021, most people believe we’ve hit rock bottom, and we have no where else to go but up.

From a salmon fisher’s perspective, 2020 wasn’t a bad year, and looking ahead, we do have much to be optimistic about. Coho jack counts were the largest since 1977. Jacks (immature salmon returning a year early) have historically been a predictor for returning adults in subsequent years, but like most nature-based science, it’s become predictably less reliable in recent years. None-the-less, the promise of “a good fishing season next year” may not be as big a lie as it usually is when I’m trying to get customers to book fishing trips with me for the upcoming season (wink, wink…).

I was recently interviewed for an article for Eugene Weekly as the author was doing a piece on East Coast fish and chips (cod) versus West Coast fish and chips (halibut) with some discussion about the conservation of said species. After speaking about the rare success story of west coast groundfish stocks and the likely role the Rockfish Conservation Area (RCA) played in their recovery (which was significant), he asked if I supported additional conservation areas in order to foster more BOFFF’s (Big Old Fat Fecund (or fertile) Females) and the benefits they bring. Given my historic advocacy for marine reserves and marine protected areas, I found myself surprised by my own answer of “No, at least not at this time.”

I think my answer surprised him even more than me, so I had to clarify. The RCAs did their job. So well, in fact, that seasons, targeted species, bag limits and gear restrictions are liberalizing, not constricting. That’s not the worldwide trend most fisheries are gravitating toward. RCAs played an integral role in getting us to greener pastures; the Oregon Fish and Wildlife Commission just upped the 2021 daily bag limit to six rockfish per angler, up from just five for the last several years. Even given the challenges our salmon are facing in the ocean phase of their lifecycle, ground fish seem more resilient to the warm water blob and the El Nino events in recent years. (I see the Warm Water Blob now has its own place in Wikipedia. That sucks…)

The reporter had asked my opinion on what makes better fish and chips, halibut or cod? I think he regretted asking the question given his lack of knowledge (and maybe mine for that matter), of what species are used for fish and chips throughout the east and west coast. I don’t think we use much actual cod here on the west coast, and if we do, it may be more lingcod than Pacific cod. I just read that Pacific cod is now a nationally listed species of concern. And I don’t think East Coast cod are faring all that well, but it’s hard to find information on their current status.

So, what else do we have to look forward to in 2021 beside improving salmon runs, a more liberal bag limit on rockfish, and a vaccine that should change the face of our social distancing in the future? Well, I hear that the Magnuson-Stevens Act may get more attention than it has in the last 14 years, and that’s a good thing. California’s Rep. Jared Huffman seems to be leading the charge on this initiative, and here’s his one-pager on it all.

And there it is, Title 1, just where it belongs:

Title I. Climate-ready fisheries: Requires consideration of climate change and climate science in regional fishery management council priorities and planning and provides new tools and approaches to address shifting stocks and other climate impacts on fisheries management. Tackling climate change is crucial as oceans and fisheries are facing some of the largest impacts due to ocean warming, acidification, and other climate stressors. 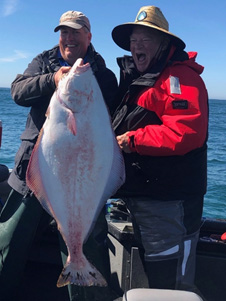 An unmistakable smile: Todd Liebow with his first Pacific Halibut

This is the X-factor in my opinion. I went on to tell the reporter that a changing climate is likely what’s brought us the warm water blob and ocean acidification. Twenty years ago we thought freshwater degradation was the cause of the decline of salmon in our watersheds, and we were likely right. But if scientists are correct in their modeling no amount of habitat destruction or overfishing can overshadow what the future holds if climate change and ocean acidification have their way. Our rock bottom has yet to come. And although the less adaptive cold-water species will be the first to go, even the more resilient and longer-lived rockfish will have their day in court. If that day happens, it will be on us, all of us.

Now, more than ever, bi-partisan, bi-cameral, progressive, conservation-minded leadership is needed to address this crisis before we go over a cliff. Let’s hope that day has come because I don’t want to be the guide that tells Todd Liebow, there’s nothing left to fish for.