Chub mackerel caught by Kevin Fetzer off Beavertail Light, Jamestown, RI. Fetzer said, “They put up quite a fight on light tackle and are good to eat.”

I step on the dock, and that intangible essence of what boating and fishing brings to me turns on. I have tried to put my finger on it for years. 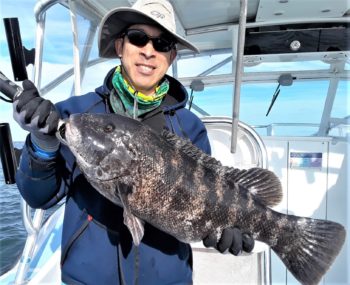 Jamie Wong of Cambridge with a 25” tautog he caught in November. The tautog this year seemed larger and more plentiful.

It’s the fact that you are outdoors, in nature, and can observe firsthand what nature brings. It’s the exhilarating feeling of getting a bite and having your line start to peel off. And, it’s the hunter instinct in us that is satisfied by bringing your catch home for your family and friends to eat. But, most importantly to me, it is the joy that spending time with family and friends brings. The one-on-one time that fishing creates.

I once took a friend and his 16 year-old son fishing. He thanked me the following week and said, “You know it wasn’t about the fish that we caught, it was all about the quality time I got to spend with my son. We haven’t spoken that much in a couple of years.” These are the types of bonds that fishing builds.

So I am grateful for the fishing opportunities that this year brought. And, I look forward to next year, working hard to catch fish, bringing a fishing experience to others and doing everything I can to put fish first for the future so that there are plenty of them in the water for our grandchildren and great grandchildren to catch and eat or release.

Hot bites I am thankful for 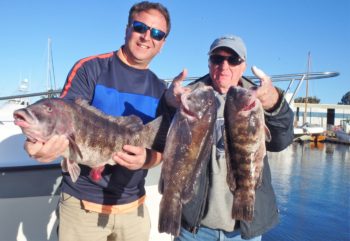 Steve Brustein of Rhode Island and Mike Weaver of New Hampshire with some of the tautog they caught off Newport in October.

Tautog fishing was a big surprise this year. Arguably, it was the best tautog fishing season in years, and by the way, last year was a good year too. Tautog are a very slow growing fish and can live for 35 to 40 years. So a couple of years ago when they were down as a fish stock it took a while for them to come back. This year there were quite a few large fish over 22″ (legal size in RI and MA is 16″). The nice thing this year was that there were plenty of 16″ to 22″ fish, too, and many undersized fish below 16″. This abundance is a good sign for the fishery, but anglers will likely overfish this year because tautog were so abundant and relatively easy to catch.

Tautog is a great eating fish. Its fairly white, somewhat dense meat is enjoyed by many who say it is the best eating fish commonly caught in our waters. They feed off the crustations and shellfish on the bottom and in between rocks, structure, docks, bulkheads, ledges and muscle beds. The season is open until December 31 with a five fish-per-person-per-day limit and a ten fish-per-boat limit.

Another surprise this year were the mackerel. Boston mackerel, also called Norwegian mackerel, Scottish mackerel or just mackerel, were here in greater abundance. Spanish mackerel and chub mackerel (named “chub” because it is chubbier than most mackerel) all made an enhanced appearance in northeast waters off Massachusetts and Rhode Island.

Aquidneck Island angler, John Migliori, said last week, “The mackerel are back in town. Some are large and some are small, and there are even some herring mixed in with them.”

We have had mackerel in our waters before, but this year (and last) they appeared in greater abundance. Mackerel spends the warmer months close to shore and near the ocean surface, appearing along the coast in spring and departing with the arrival of colder weather in the fall and winter months. However, many believe the abundance of mackerel in our area is due to climate change, because they seek our cooler water compared to states south of us.

Summer flounder (fluke) fishing was on and off this year. Some days the bite was on in the Block Island Wind Farm area and some days the bite was off. The best fluke fishing was in June this year, both in our bays and out in front along our ocean coast line off Narragansett, Pt. Judith, Charlestown and Westerly. The best bite was off Montauk and Fisheries Island, New York. After June, fluke fishing in general was good one day and bad the next without any consistent positive pattern, but those who went fluke fishing and stuck with it were often rewarded with a nice doormat-sized fish and a great black sea bass bite.

Black sea bass and scup were caught in abundance once again this year in our local waters. With both species, larger and larger fish are being caught. 15″ scup and black sea bass in the low 20″ range were more common than ever before. The abundance of both of these species in our waters can directly be attributed to climate change and warming water. These warm-water fish have moved into our area in abundance because our water is now warmer than ever before.

Our oceans give us so much to be thankful for. As the holiday season is upon us, let’s take time to give thanks for their bounty and for the joy that they bring us throughout the year.