Fifty years ago this month, Lyndon Johnson signed the Wild and Scenic Rivers Act, establishing the protection of rivers possessing “outstandingly remarkable scenic, recreational, geologic, fish and wildlife, historic, cultural, or other similar” as a national priority. This legacy has been storied, keeping flows flowing and water courses unimpaired in some of our most special inland waterways. Several states, including California, have passed Wild and Scenic Rivers Acts of their own. 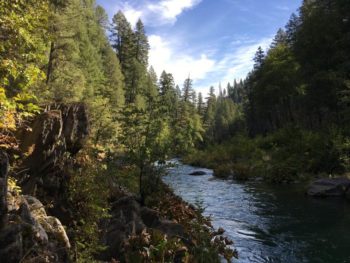 This photo and top: McCloud River

I recently returned from a trip to the Wild and Scenic McCloud River in far northern California, where the river’s cool, blue-green waters that originate from springs and snowmelt off the slopes of the 14,179 foot Mt. Shasta tumble through a cathedral-like forest of oak and pines that seem to rise to the heavens. For hundreds – if not thousands – of years before the arrival of European explorers and settlers, the Winnemem Wintu people fished for and harvested the native salmon and steelhead that ran up the McCloud river from the Pacific Ocean to spawn.

The McCloud, along with the meandering Upper Sacramento and the brawling Pit River make up the primary headwaters of the Lower Sacramento River, that now sustains the largest extant run of Chinook (aka king) salmon in the state. In 1945, portions of the McCloud, Sacramento and Pit Rivers were flooded as a result of the construction of Shasta Dam and the impoundment that it created, Lake Shasta. Before the dam was built as part of the frenzy of dam-building that took place in the Western U.S. in the 60 or so years between the signing of the Reclamation Act of 1902 and the raising of the last mega-dam, Glen Canyon Dam, on the Colorado in 1966, the waters of the Sacramento River and its tributaries ran unimpeded from mountain to ocean.

While the exact number of returning chinook in the years before scientific records were kept cannot be determined with complete certainty, based on commercial catch records from the years before California’s major dams were built, Central Valley chinook salmon stocks in aggregate are conservatively estimated to have reached between 1-2 million salmon annually.

Today, sadly, those numbers sound like something out of a fisheries biologist’s wildest dreams. In 2004, total escapement of Chinook salmon in the Central Valley was down to 420,442 fish – 33% lower than the year prior. That figure has continued to drop and now stands at a perilously low level. According to its 2017 Chinook Salmon Spawning Escapement Report, the CA Dept. of Fish & Wildlife estimated that just 44,574 adult Fall-Run Chinook – the largest of the four distinct groups of salmon that return to spawn in California Central Valley rivers and streams – had made it back to their annual spawning grounds to replenish their stocks.

The Central Valley runs that once supported the Winnemam Wintu and other native tribes from the San Joaquin Valley to the Oregon border, remain vitally important to commercial and sport fishermen, native tribes and others, and are the principal producer of Chinook salmon caught in California’s ocean fisheries. The Central Valley runs also contribute to the ocean fisheries of neighboring Oregon and even Washington State. 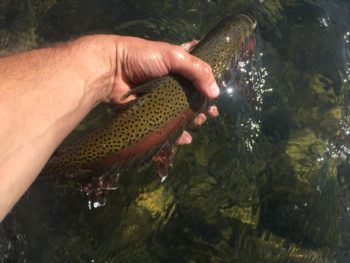 The numbers are even grimmer for the fall-run Chinook’s threatened spring-run cousins. In the state’s most recent survey, only 2,118 spring-runs were counted in their favorite spawning stream – Butte Creek, outside of Chico. And that was up from the 950 fish that were counted in 2017. Because of the deleterious effects of damming, deforestation, agricultural damage and increased urbanization, California’s native salmon populations continue to fight just to maintain viability. This year, two important commercially harvested stocks (the Klamath and Sacramento fall-run kings) were declared “overfished” (many fishermen prefer the term “depleted”) because production has declined so precipitously, driven by water mismanagement.

But the pendulum will swing back our way. Recently, I attended the Pacific Fishery Management Council’s (PFMC) September meeting and was honored to participate as the commercial fisheries alternate on the Habitat Committee. The committee will play an important role in crafting salmon rebuilding plans over the coming months, and we came away with a renewed sense of purpose and commitment for the ongoing project of restoring our state’s salmon stocks through habitat protection and recovery programs.

Recently the San Francisco Chronicle featured a front-page story on the efforts of the Yurok Tribe to help restore salmon and steelhead habitat on the South Fork of the Trinity River, which combined with the Klamath River form the watershed that supports the largest salmon run in California outside of the Sacramento-San Joaquin River Delta system. The Yurok and their conservation partners are using a number of creative, scientifically-proven methods to help restore salmonid spawning habitat, including the strategic placement of fire-damaged trees in the river as a means of habitat improvement.

Under the Magnuson-Stevens Act’s framework of environmental and fisheries protection, the PFMC Habitat Committee will be key to recommending flow and habitat provisions for the rebuilding plan aimed at meeting and exceeding state escapement targets going forward. Together with all the other stakeholders, the Pacific Coast Federation of Fishermen’s Associations and our allies will continue protect, recover and restore the extraordinary wild headwaters and productive watersheds that are home to the troubled but indomitable and irreplaceable Chinook salmon.