I’ve been a recreational shark fisherman since the late 1970s. Over that time I and the folks who fish with me have caught a lot of fish. We’ve caught blue sharks and sandbars, common threshers and duskies, shortfin makos and tigers. We’ve caught bizarre-looking hammerheads, and we’ve had whites that weighed more than a ton and, in at least one case, weighed more than the boat we were fishing from, pass close alongside.

Even so, though I’ve been a part of the fishery for more than forty years, I still look forward to the next trip. I still get excited when something unseen swims into the chum slick, picks up a bait and makes a reel scream. 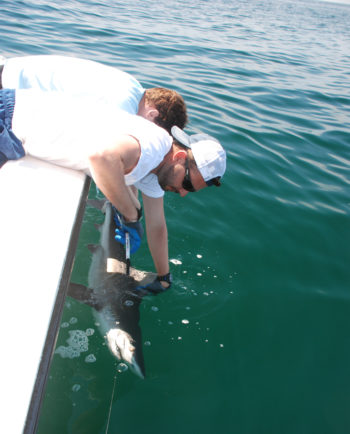 This photo and top: catching a shark for research.

Yet I got a special thrill when I received a text message a few weeks ago, which simply said “Our thresher shark was pinging around Montauk! And one of the sandbars we tagged too.”

It had been sent by a graduate student, a PhD candidate at Stony Brook University, who I had been helping catch sharks for his research, and for the research of some of his colleagues. I had given up a lot of my personal offshore fishing time, and most of the good weather windows, to help them out with their work. Getting that text made me feel far, far better than just catching another fish could have done.

It’s been said that anglers go through various stages over the course of their fishing lives, and maybe that explains why.

In the first stage, anglers just want to catch a fish. The kind of fish, or its size, doesn’t matter.

Once that’s out of the way, the next goal is usually to catch a lot of fish, and then to catch big ones.

Plenty of anglers stall at that point, and remain content to fill coolers, perhaps win a contest or two, and star in an occasional photo hung on some tackle shop’s wall. But others continue their evolution, and seek to catch more challenging species, or intentionally handicap themselves in order to catch the same species of fish in more challenging ways. Depending on where you are, you’ll find a lot of such folks chasing striped bass, permit or steelhead.

But there is one final stop on the anglers’ road, and that comes when a fisherman stops worrying about his or her own catch, and turns to helping others, whether those “others” are fishermen or the fish themselves.

When I found sharks for the researchers this season, something that I’ve managed to do on every trip we’ve taken so far, the fisherman in me still took an atavistic pride in the fact that we caught lots of fish, and that some were satisfyingly large. But I found more reason for pride in the fact that I could use skills that I’ve developed over many years to help researchers better assure that the fish I enjoyed in the past will still be around well into the future, when other anglers can enjoy them long after I’m gone.

And I’m proud to be able to help a new generation of fisheries scientists advance their careers, so that they can expand our knowledge of shark biology, which will, in turn, hopefully lead to sharks being better managed than they are today.

The satisfaction I gain from that is far greater than anything I have ever gained from putting a shark on a tournament scale, or putting shark steaks in the broiler. Although, in their time, such things were fine, too.

Opportunities to give back to the resource are available to anglers on most of the coast.

Here in New York, for example, striped bass anglers can participate in a cooperative anglers’ program, in which they maintain logbooks recording details about their catches, and take scale samples from all striped bass caught. Such information helps New York meet its recreational data gathering obligations to the Atlantic States Marine Fisheries Commission, and so contributes to better management of the species.

Offshore, there are a number of cooperative tagging programs that allow anglers to contribute to the scientific knowledge of various highly migratory species. One of oldest of those is the National Marine Fisheries Service’s Cooperative Shark Tagging Program, which dates back to 1962. I’ve been participating in that one since I first fished offshore. I participate in the Southeast Fisheries Science Center’s cooperative tuna and billfish tagging program, too. No matter where an offshore angler fishes, there is probably a local tagging program that could use his or her help.

Those who like to work with people as well as fish can also find ways to give back to the resource. Working with various conservation groups, including the Marine Fish Conservation Network, is certainly one way.

And sometimes, anglers discover that there is no existing organization willing to take on a local threat; in such cases, dedicated recreational fishermen can band together and enter the fight on their own.

Down in Florida, a few years ago, a group of anglers and local fishing guides formed Save the Tarpon to end what they believed was an abuse of the tarpon fishery in Boca Grande Pass. They ultimately defeated well-financed industry opponents and convinced the Florida Fish and Wildlife Commission to ban tarpon snagging around Boca Grande.

More recently, Florida anglers and charter boat captains created Captains for Clean Water. They’re striving to change current water policies that divert billions of gallons of nutrient-laden waters from Lake Okeechobee into two coastal rivers, causing devastating algae blooms. Their goal is to restore the natural course of such waters through the Everglades and into Florida Bay, which is losing its biological diversity due to a lack of fresh water inflow. The outcome of their battle will, in large part, determine the health of south Florida’s fisheries for a generation or more.

It is an extremely important fight. But to me, the best example of giving back was the late Bob Pond’s fight to restore the striped bass.

Pond designed the famous Atom line of fishing lures, and founded the Atom Manufacturing Company that built them, soon after the end of the Second World War. The plugs were a commercial success; for decades, they were among the “must-have” lures on the striper coast, and Pond earned a good dollar from his business. When the striped bass stock began to collapse in the 1970s, Pond didn’t stand by and do nothing. Nor did he, unlike so many others in the industry, try to milk as much as he could from the fishery for as long as it lasted, without a thought for the future.

Instead, he reinvested his earnings in the striped bass resource, taking money out of his own pocket to finance research into the decline. He set about marshalling anglers, scientists, legislators and fishery managers into a force that would ultimately help to restore the striped bass to health.

I had the privilege of meeting Pond during that time, when he stopped by a tackle shop where I worked during the summers of my college years. He gave me my first introduction to the world of fishery management, and enlisted me into the legion of anglers all along the coast who, thanks to him, became advocates for effective striped bass conservation.

Bob Pond’s advocacy for the striped bass came at a significant financial cost. He dedicated more time to the health of the striper than he did to his business, believing that was the right thing to do. As his grandson, Paul Trost, observed, “He felt that since he was helping get the fish out of the water [by making and selling lures], he should be helping to put [the fish] back in. He was adamant about protecting the [striper] species.”

That’s what “giving back” is about.