Anybody who grew up fishing or hunting enjoys special memories from places of profound significance. If for you that place involved public lands, including beaches, local parks, and national parks or refuges, then odds are that place was purchased or improved with funding from the Land & Water Conservation Fund (LWCF).

Way back in 1965, Congress authorized LWCF in order to conserve and create public lands and recreational opportunities in the face of increasing development pressure. Up to $900 million annually comes from royalties from outer continental shelf oil and gas drilling to a granting program that matches state and local funding dollar for dollar. The funds may be used to acquire land, purchase conservation easements, and to make improvements such as building fishing piers and boat ramps. 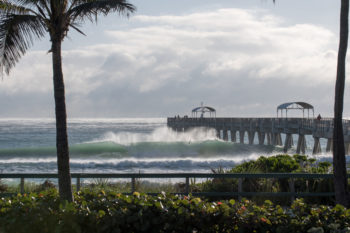 This photo and top: Lake Worth Pier. Credit: Nicola Lugo.

LWCF funded many of the places where I recreate, especially those that provide access to our waters. The place of my youth that stands out most, though, is Southeast Florida’s Lake Worth Beach and its legendary fishing pier, which juts out into the Gulf Stream. This gem, nicknamed “L-Dub,” offers superb public access to the place where the world’s largest ocean river flows across reefs, and tumbles onto the beach as breaking waves. In fact, it is relatively common in the winter months, given northwest winds, for anglers using kite-fishing gear to catch and release sailfish and other pelagic species essentially from land. On average, about 700 anglers fish from the pier per week, including all walks, from fishing families out for some light-tackle fun to hardcore surf fishermen that target snook, pompano, and the pelagic species.

It is a prime place for kids to immerse themselves in nature. Countless children of diverse races and ethnicities have first witnessed the diversity of a tropical reef by snorkeling along a teeming outcropping that rises at the beach’s south end. Located in water shallow enough for a kid to stand, this unique type of reef is called “nearshore hardbottom,” which is federally designated as essential fish habitat (EFH) and a habitat area of particular concern (HAPC). It is absolutely essential settling habitat for early juvenile reef fish, as well as juvenile green sea turtles, and is patrolled by snook, barracudas and sharks, among other predators. My earliest memory of seeing fish underwater took place there, while snorkeling with my grandmother. Though I wasn’t more than four years old, I vividly remember the harmless little leatherjacks nipping at our legs, and the reef teeming with brightly colored grunts.

The Lake Worth Pier is also often the first place that local and visiting kids get to wet a line in the surf. My childhood friend Jake (who became a commercial fisherman) and I would go to the pier with his dad. As kids barely tall enough to see over the railing, we caught mojarra, mangrove snappers, and blue runners on bits of shrimp. Once we were a little taller, and stronger, we graduated to snook, pompano, and cobia. But my favorite L-Dub “fishing” story didn’t involve teleost fishes, or fish at all.

Steve Kantner, a.k.a. the “Land Captain,” is a legendary fishing guide, outdoor writer and humorist. To this day, Steve’s a giant kid trapped in a man’s body. When I was an impressionable young lad, he often held court in one way or another on the pier, and kids were his favorite audience. One scorching summer day, when the fishing was really slow, we followed him back to the trunk of his car, where he pulled out a light fly rod rigged with a barbless dry fly.

Next thing we knew, we were flyfishing for curly tail lizards, an exotic, invasive, lightening-fast species that reaches about six inches. You’d have to land the fly within a few inches of the parking lot dumpster, which sat about three inches off the ground, offering the lizards a shady ambush spot. You’d twitch the fly, strip it slowly across the asphalt, and the lizards would rush out from under the dumpster to inhale it. I kid you not, once hooked the lizard would jump and make for the dumpster as quick as a hooked snook heads for a piling or a mangrove. We had to stop the run before they got under the dumpster, or they’d break the 5x tippet on the metal. The lizards were released unharmed.

Then there is what my parents initially thought was the siren’s call of the surf. As little kids, we body surfed the shorebreak. As a teenager and a budding surfer, I was lucky enough to have a few older friends that were already in with the very territorial local surfers. I made my way into that lineup humbly, with the greatest respect and care not to get in anyone’s way. Big or small, clean swell or wind chop, scorching hot or freezing cold, I paddled out, absorbing volumes about weather and the coastal ocean in the process. Eventually, the locals acknowledged me and I started catching a few of the better “set waves” that were off-limits to anyone they didn’t know.

The resources that beach offered opened so many doors for talented people, some of whom came from circumstances that made a career revolving around the ocean their only way to see more of the world. Some of the lifelong friends I made there are professional surfers or professional fishermen. The beauty of the place and the experiences it offered inspired several of us, myself included, to pursue careers as outdoor writers and photographers. Other friends work as lifeguards or for coastal conservation organizations. Without Lake Worth Beach, none of us would have been as exposed to the sublime dynamics of our coastal environment, ever figured out it’s possible to make your avocation your vocation, or been remotely as successful.

LWCF has funded projects in every state in the nation plus the territories, projects like “L-Dub” that made communities much healthier, happier and prosperous. Yet sadly, Congress may really drop the ball and allow LWCF to expire come September 30 of this year. That means our rapidly growing nation may lose much of its ability to afford more places for healthy, outdoor public recreation. That means that more people will be using the same places, adding to the intensity of use. Picture even longer waits at the boat ramp, surf fishermen standing shoulder to shoulder along limited beach access points, and worsening water quality woes because there was no funding to purchase conservation easements that would have protected essential wetlands from development.

It’s estimated that outdoor recreation supports 7.6 million jobs and generates $887 billion in consumer spending annually. Thanks to the access provided by LWCF, and largely well-managed fish and wildlife populations, more and more people are getting involved in recreational fishing and other healthy outdoor activities. In order to protect the places we have from overuse, in order to protect ecosystems, and in order to expand access, Congress needs to permanently re-authorize LWCF at maximum funding levels. Regardless of where you live, please call or email your member of Congress and Senators and insist that they go to leadership and demand LWCF’s reauthorization. Many fishing and hunting organizations are sending out action alerts. Here is an alert you can sign offered by the American Fly Fishing Trade Association.

Terry Gibson is an outdoor writer and consultant based in Jensen Beach, Fl. Over a 20-year career, Terry has served in several high-level editorial positions at major fishing publications, managed a charter service, and served in various appointments to advisory panels to the South Atlantic Fishery Management Council and South Florida Water Management District.
View all posts by Terry Gibson →