There’s no reason to wax here about the extraordinary decline of river herring and shad. If you’ve got some fishing history (particularly striper fishing) under your belt, I’m pretty sure you get it. Bluebacks and alewives (aka “striper candy”) just aren’t around anymore. And when they are, in most states, we aren’t allowed to catch and use them as bait.

It’s a huge bummer. Shad and river herring once supported some of the largest commercial and recreational fisheries along the Atlantic coast. And they were a crazy important forage source.

There were 140 million pounds of river herring and shad caught in 1969. By 2013, that number decreased to around 2 million. 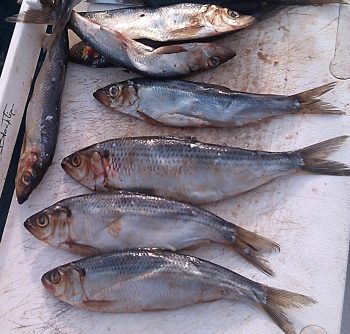 This photo: alewives mixed in with a flat of sea herring (incidentally caught in the sea herring fishery…). Photo by John McMurray. Top photo: shad, photo via the U.S. Fish and Wildlife Service.

Think about that for a minute… If they were brought back to even half their historic numbers, imagine the sort of scenarios we might have – the striped bass and bluefin tuna blitzes, and everything else that used to crash though schools of river herring. And hell, anglers across the coast might actually be allowed to get a few dozen to use as bait again.

Next week, the Mid-Atlantic Council is going to make a critical decision on how we move forward with river herring and shad. How it plays out will likely determine whether we get them back.

The question at the table will be whether or not the Council kicks off the process of giving river herring and shad full federal management and all protection and rebuilding requirements federal law requires. There are many reasons they should.

The science is pretty clear. A 2012 stock assessment found just about all of the river herring runs for which there were usable data were severely depleted. Coastwide, recent estimates put them at less than 5% of their historic size. American and hickory shad assessments show that they are in pretty terrible shape also.

The cause of such decline is most certainly multifaceted. Because river herring and shad are anadromous – spending most of their lives at sea, then moving up specific rivers to spawn – they’ve been getting screwed both in the rivers and at sea.

Impediments like dams have impacted river herring and shad by reducing access to historical spawning areas. Climate change (warming waters) is likely having some impact too, the extent of which scientists aren’t really sure about yet.

States (and the federal government, and local partners) have invested an extraordinary amount of money; some states have imposed moratoria, others strict catch limits, some have even limited some commercial activities in certain times and places.

Still… the fish just don’t seem to be coming back.

Why? Well, a lot of these fish, perhaps the majority of entire runs, are more than likely being caught in large trawl nets intended for sea herring, mackerel, squid, etc. and sold or dumped overboard by the thousands.

It’s very, very likely that the catch in federal waters from all fisheries, and we’re talking about hundreds of thousands of pounds of known catch and potentially much more that we don’t know about, is keeping river herring and shad population at their current low levels.

Why is this being allowed to happen? For one, it’s because they aren’t technically managed in federal waters.

Both river herring and shad are managed by the Atlantic States Marine Fisheries Commission (ASMFC), a consortium of states that manage most everything fishable within three nautical miles.

But industrial-scale fisheries for sea herring, squid, and mackerel that catch river herring and shad as bycatch generally operate beyond 3 miles, in federal waters. Those fisheries are managed by federal councils.

The point here is that river herring and shad aren’t getting the sort of coastal conservation and management they need in federal waters (overfishing limits, accountability measures, etc.) where they spend most of their lives and where most of the mortality likely occurs.

To the fishing industry’s credit, they initiated a voluntary river herring avoidance program several years ago, which is indeed a good thing. But keep in mind that it’s voluntary, and there’s nothing binding about it at all, and it’s only in the Atlantic herring and mackerel fisheries and doesn’t apply to the squid, butterfish, and whiting fisheries where there is likely bycatch as well.

And to the federal management councils’ credit, over the past few years the Mid-Atlantic and New England Councils have passed conservation measures intended to address river herring and shad catch in the mackerel and herring fisheries. Both councils imposed catch caps – limits on the amount of river herring and shad that can be caught in the mackerel and herring fleets – and the Mid-Atlantic Council prohibited “slippage” or dumping these fish at sea on observed trips.

These were real efforts to address the problem made with good intentions, but the reality is there is no evidence they have made much difference on the water. Because for one, they can’t be enforced.

In 2012, both councils voted to require federal observers on 100 percent of the largest industrial boats, in part to better understand the river herring and shad bycatch problem. Yet, NOAA then disapproved those requirements, saying that the agency did not have the resources to pay for observers, and had not yet developed a legal way to share observer coverage costs with the industry. So right now we have almost no way to verify what’s being caught and dumped overboard, and the agency has signaled this will remain a low priority for coverage.

So, really, we have unenforceable caps, based on historical river herring and shad catch (note: levels that likely put and are keeping us where we are now), designed to maintain two fisheries (mackerel and Atlantic herring) at their current “incidental catch” levels.

That’s essentially a plan to keep river herring and shad at a depleted level (5% of their potential size), forever! Seriously… I can’t imagine anyone who gives a crap is okay with this.

In 2013, the Mid-Atlantic Council had a chance to give full federal management to river herring and shad, yet in a very close vote decided not to. In the end, council members gave themselves three years to revisit the issue. And now those three years are up.

Next Wednesday the Council will again vote on whether or not to develop a plan to add river herring and shad as a stock in the Mackerel, Squid, and Butterfish FMP.

So really… after years of work, are we really in a better place now? We have very limited information about river herring and shad catch in federal waters, and no real oversight or effective limit on the at-sea catch.

After all these years, the problem is still pretty clear. River herring and shad are still likely being killed in large numbers at sea, which probably is undermining the success of all other conservation efforts….

In my opinion, what we need is the kind of coast-wide fishery management plan (FMP) that would come with federal management, that would take the reins, and turn upcoming stock assessments into science-based annual catch quotas, not to be exceeded in any fishery along the entire coast, accountability measures to prevent overfishing, and a clear identification of essential fish habitat (EFH).

All the management bodies (ASMFC, MAFMC, NEFMC, and NOAA) need to address the problems in a comprehensive way, whether it’s bycatch of large-scale fisheries, or analyzing coastal development projects and supporting dam removal. Federal management, through a stock in the fishery designation, would put the Mid-Atlantic Council (which BTW has rebuilt everything it manages) in the driver’s seat of that work.

I know NOAA and Council staff are concerned about the additional time and resources this might take, but really, the remaining requirements can be planned and completed without significantly disrupting ongoing work. In the last three years, many of the important pieces have already fallen into place: stock assessments for river herring and shad are planned for 2017-2018, a technical expert working group for river herring and shad exists, a River Herring and Shad Committee and Advisory Panel serves the Mid-Atlantic Council, and Council staff have completed significant work analyzing river herring and shad issues. And the catch caps and slippage measures lay some groundwork.

I’m not saying it’s gonna be easy. But come on man… The river herring and shad problem isn’t gonna get fixed with the status quo. That’s become pretty damn clear.

The beauty of these species’ fast-growing biology is that if we get it right, in a few years they can recover and flood our coasts and rivers with life like we’ve never seen. Like we’re currently experiencing with menhaden! Imagine millions of river herring and shad returning to rivers like the Hudson.

I think it’s worth it! Do you?

If so, hit up your state’s Council members right now. Let them know you want river herring and shad added as a stock in the Mackerel, Squid, and Butterfish FMP.

7 comments on “Will River Herring and Shad Get Another Chance?”