It’s hard to see how this isn’t a good thing for us, so why the push back?

Last Thursday the Obama Administration announced it was establishing the first ever National Marine Monument in the Atlantic — a protected area encompassing almost five thousand square miles off the coast of New England.

Before anyone gets all crazy, let me just say right off the bat, that recreational fishing in the Monument will still be permitted.

That said, I’m having a hard time understanding why any angler in his/her right mind would be upset about it. I mean, come on man… If you look at this objectively, through a non-political lens, it’s unequivocally beneficial, on a number of levels. 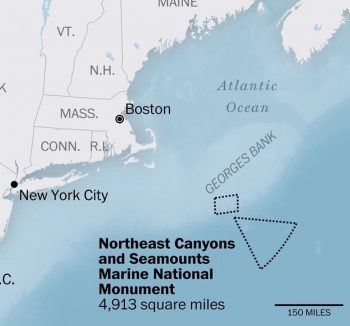 What we’re talking about here specifically are three New England canyons (Oceanographer, Gilbert, and Lyndonia) about 150 miles southeast of Cape Cod, plus four very rare seamounts (Bear, Physalia, Mytilus and Retriever) offshore of that. You can see exactly where they are by looking at the chart included here.

Taken together, it is an incredibly biodiverse and productive area supporting an extraordinary diversity and abundance of marine life.

Absolutely, given its uniqueness, its ancient coral forests, its exceedingly rare habitats, and its extraordinary biological productivity, why the hell wouldn’t we want it protected from industrial scale energy development, mining, cable laying, bottom trawling, etc.?

For one, I’d think anyone who fishes more than a few days a year would understand that such areas should be protected from industrial use, simply for intrinsic value. Anglers should just get that. Yet from a self-interest perspective, even if you don’t and probably never will fish such an area, the biological benefits should be intuitive. As fishermen we understand that everything is connected. There are all sorts of things that go on here that effect what happens inshore, in those areas we do fish. Some are documented (e.g. the high densities of krill in the canyons that get transported inshore) but most we don’t even know about yet.

I know there may be a few climate deniers reading this, but it’s important to point out here that leaving such large-scale biodiverse areas intact is an important hedge against what are undoubtedly climate-related stressors. Ocean scientists have been very clear that large-scale marine habitat protection is one of the most significant things the U.S. can do to build resilience as the ocean acidifies and warms.

In the big picture these coral canyons and seamounts are likely really important to the entire northeast region. And they’ve remained largely intact up until this point because for one, there’s not much extractive use there… Because it’s out of range for most fishermen, and also the bottom in a lot of these areas is just too deep and rugged, and not friendly to mobile bottom gear. So then why bother with a monument?

Well, given the often precarious situations the New England fishing industry often finds itself in (e.g. cod), it’s hard to believe there won’t be industry expansion out to these waters, and the development of new innovative gear that can indeed fish those rugged bottoms.

But a few things here… For one, the New England Council doesn’t exactly have a good track record with habitat protection. One needn’t look much farther than their Omnibus Habitat Amendment, passed just last year, which actually decreased the amount of protected habitat by 60%.

Regardless, the Council has no regulatory authority over non-fishing impacts. In other words, there’s nothing they could do, save maybe write a letter, should an energy development, mining, cable-laying etc., proposal come through. And that sort of development in such areas is certainly within the realm of possibility, in fact likely within our lifetimes, were we not to put it off limits. So yes, such comprehensive monument protection IS IMO needed.

Indeed, some, albeit a very limited amount of fishing, did occur in the protected area. Some bottom trawling and pelagic longlines move in and out of it, but the levels are pretty low. The offshore lobster fishery is more significant, but not much. According to NOAA, a handful of lobster boats use the area (five to eight boats). Then there’s the red crab fishery – a small, limited-access fishery, which is prosecuted in the canyons and continental shelf from North Carolina to the Canada border. The vast majority of red crab landings are from outside the monument area according to the New England Council, and the protected canyons appear to be the least productive area for the red crab.

But yes, there will be some impact in closing the area to commercial fishing, although it’s not what I’d consider catastrophic, and probably not terribly significant when you look at the big picture.

That said, I don’t really want to downplay it here, because while overall it might not be terribly significant, for those five to eight lobster boats, it’s likely very significant. Sure it will only displace them – in other words they’ll need to fish somewhere else – but in the case of the lobster fishery, it is so saturated, there may not be a whole lot of other places they can move.

Thus, I totally get where the offshore lobster fleet is coming from in their opposition to the Monument, and in the end, so did the Obama administration. It tried to address their concerns to the greatest extent possible, first, by making the monument considerably smaller than the initial proposal, and second, by giving the red crab and lobster fisheries a seven-year grace period to figure out a relocation plan. That’s probably not great if you’re one of those displaced fishermen, but it’s something.

In the end what all boils down to is a cost-to-benefit analysis. In the grand scheme, the impact of the Monument designation is relatively small compared to the benefits of protecting thousands of miles of exceedingly rare habitat in perpetuity. I think the administration understood that when making such a decision.

Now, you might be thinking that, “Hey, these guys were already fishing here, why can’t we just give them exemptions, let them continue to fish there, and prevent any new fisheries?” And/or, “What’s habitat damaging about longlines, or say mid-water trawls?”

I do understand such a “freeze the footprint” rationale, but the goals of the Monument I think are a little different. The intent here isn’t just to protect habitat or prevent the expansion of fisheries, it’s to retain/maintain a system of complex biodiversity in an area that has been relatively unfished for all these years. It’s to keep everything intact, instead of just parts of it, so it can be studied, as a baseline, and so we know what that sort of thing looks like. That means not allowing the sort of large-scale extractive use that comes with commercial activity. Presumably, having such a baseline will help us make management decisions in other areas moving forward.

One might say then, “Well, what about recreational fishing?” But any take on a recreational scale, particularly in an area so far offshore, is much, much smaller than commercial harvest, and considerably less impactful. Furthermore, allowing recreational use is consistent with national parks across the nation.

As I mentioned in a prior blog post, there are the almost seventeen hundred documented species in the coral canyons and seamounts, with estimates of an additional 50% yet to be discovered. That’s just awesome! Consider that relative to the range of species we have inshore. It pales in comparison, likely because we’ve been knocking the (expletive) out of everything for so long.

Leaving this area, which represents a mere two percent of federal waters off the East Coast, relatively untouched, and allowing that sort of biodiversity to continue/increase is a good thing in my mind… Not just for intrinsic value, but because the sort of overflow and cascading benefits that almost certainly affect the fishing we do on a regional scale.

Yet social media seems to be full of anglers, who contend that this is an overreach by the Obama administration, and that it is just trying to put fishing off limits, even though it’s been very clear from the beginning that recreational fishing will be permitted. I mean come on man… whatever your political leanings are, and however you feel about this President, you have to acknowledge the benefits here.

For sure this wasn’t some sort of overreach. The Antiquities Act has been used more than 100 times by presidents from both parties to protect some of the nation’s most unique areas, and that’s exactly how it’s being used here.

Seriously, if anything, this will benefit recreational fishing, by ensuring marine diversity and abundance, even if it is an area far offshore from where we usually fish.

Anglers simply NEED the sort of healthy intact ecosystems that get us an abundance of bait and predators. And large-scale protection of particularly unique biodiverse areas certainly helps with that.

It’s just common sense that keeping them intact and off limits to industrial use is good for us, and for the great majority of the public who simply want this sort of thing.

So hey man… I support the New England Marine Monument designation. Don’t you???