Photo: Keven Scribner on the Antigone in the 1970s

I began commercially fishing in 1976, the year when the original Magnuson Act was signed into law. Chasing salmon, I fished in both Washington state and federal waters, and quickly became acquainted with circumscribed fishing seasons, specific opening times, gear-type restrictions and allowable catch limits. Regulation became an integral component of my rhythm and culture of commercial fishing, especially as the abundance of the Pacific Northwest salmon runs slipped more and more into scarcity as non-fishing impacts such as habitat degradation began to take a significant toll on these runs. 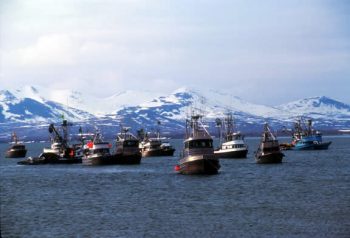 
I transitioned to Alaska fishing in 1980 and immediately felt the joy of experiencing the teeming abundance of Bristol Bay. Here was a salmon habitat ecosystem that had little, if any, negative human impacts, and was managed by a state whose constitution mandated sustainability. Even today, thankfully, the Bristol Bay salmon runs still enjoy these features — though not without prospective threats such as the proposed Pebble Mine complex.


It was this history that drew me to embrace the Marine Fish Conservation Network, to join compatriots who believe in the positive and necessary role of regulation, and who realize the significance for fisheries when sustainability is integrated into the core of guidance documents and laws such as the Magnuson-Stevens Act (MSA).

Looking forward, I hope that ecosystem management — just a twinkle in our 1990’s eyes — is more integrally embraced, and that it opens our eyes wider to see that many non-fishing impacts such as ocean acidification, eutrophication, toxic point and non-point source run-off, and terrestrial habitat degradation are within the legitimate purview of the MSA.


When I hear the phrase sustainability is a journey, it makes sense to me. With sustainability, we never really arrive, but can and do hit waypoints–and hopefully live to see mere twinkles become full-on smiles when all of us get that sweet chance to experience abundance.