I had gotten more and more involved with fisheries conservation over the years. By 1996, I sat on the executive board of the Coastal Conservation Association (CCA), an organization that had worked hard to get SFA signed into law.

Bob Hayes, CCA’s general counsel and Washington lobbyist, had played an important role in shaping SFA. I still remember the day when he walked into a CCA board meeting with a television set and VCR, and proudly played a recorded snippet of the debate that led to SFA’s passage.

It took a couple of years, and a landmark lawsuit, to convince NMFS and the regional fisheries management councils that the law really meant what it said. However, once that message got through, the results in the mid-Atlantic were dramatic.

In response to reductions in annual harvest, populations of summer flounder, scup and black sea bass began to bounce back. The summer flounder, arguably the most important fish in the region, responded particularly well. Just as that recovery gathered steam, I was appointed to the Mid-Atlantic Fishery Management Council (Council).

The appointment gave me a clear view of a disturbing development. Instead of being pleased that stocks were rebuilding in response to Magnuson-Stevens, many in the fishing community condemned SFA. They complained that while stocks were clearly rebuilding, the law’s rebuilding provisions placed unreasonable limitations on their catch. With eyes focused on short-term returns, they were blind to Magnuson-Stevens’ long-term benefits.

At August Council meetings, when annual catch limits for the following year were established, representatives of the commercial and recreational fishing industries complained that such limits were set too low. At the December meeting, when recreational regulations were proposed, party boat captains and tackle shop owners, along with some disgruntled anglers, would fill the meeting hall, demanding that NMFS let them kill more fish than the law would allow.

The hostility toward Magnuson-Stevens carried over into the political arena. Spokesmen for the unhappy fishermen began to demand that the law be amended. Under the guise of increasing management “flexibility,” they proposed broad exceptions to the rebuilding deadlines and the mandate to end overfishing. Such demands set the stage for the 2006 Magnuson-Stevens reauthorization. “Flexibility” proponents backed a bill drafted by California Congressman Richard Pombo, while conservation advocates backed a draft sponsored by Alaska Senator Ted Stevens.

By then, I was Vice Chair of CCA’s national Government Relations Committee. That gave me a good view of the proceedings, as our lobbyist and general counsel provided regular updates on legislative proceedings.

It was a fraught time in the mid-Atlantic, with the debate over summer flounder regulations reaching its peak and new management measures being imposed on the scup fishery. Having seen the improvements that Magnuson-Stevens had brought to our fisheries since SFA became law, I was pleased when, in the waning days of the 109th Congress, the Senate version of the reauthorization bill prevailed.

But soon after that, things changed. 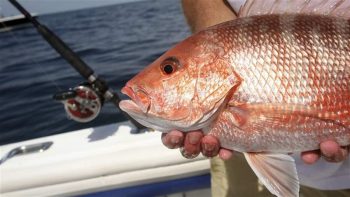 A new stock assessment of South Atlantic red snapper forced severe cutbacks in the commercial and recreational fisheries. Most of CCA’s membership lived in the five states between Texas and Florida, with much of the rest scattered along the south Atlantic coast. For the first time, the mandates of Magnuson-Stevens made a lot of CCA members unhappy.

When Magnuson-Stevens’ impact on the summer flounder fishery caused some angler angst in the mid-Atlantic, it was easy for the organization’s leadership to remain idealistic and committed to SFA. When it hit close to home, and affected one of the largest CCA states, that leadership started viewing Magnuson-Stevens a little differently.

Things only got worse when years of recreational overharvest in the Gulf of Mexico red snapper fishery caused NMFS to sharply curtail the red snapper season. Regulations required by Magnuson-Stevens had become a burden to anglers in the CCA heartland, and they began to complain.

Thus, my CCA colleagues began calling the same “flexibility” measures that they had opposed in 2006 “commonsense exceptions” to the rebuilding deadlines in 2013, and talking about “socioeconomic impacts” rather than the health of fish stocks.

The problem as that, as an East Coast angler, I saw the sort of damage that happened when managers elevated socioeconomic concerns over the health of fish stocks, and so managed those stocks “flexibly.” Many of our most important inshore species are not subject to federal management, but instead are managed by the states, working through the Atlantic States Marine Fisheries Commission (ASMFC).

In the twenty years since the passage of SFA, federal managers completely rebuilt a number of overfished stocks. But in the same period of time ASMFC, which managed fish “flexibly,” failed to rebuild a single one. Worse, a number of stocks under its exclusive jurisdiction, including tautog, weakfish, and southern New England lobster, fell into a sharp decline.

Forced to make a choice between CCA and Magnuson-Stevens, I sided with the most successful fisheries conservation and management law in the world, a fact recognized by the European Union when it adopted a common fisheries policy that is, in many ways, similar to SFA.

I don’t sit on any group’s board anymore; today I speak just for myself. I have seen Magnuson-Stevens rebuild too many stocks, and halt the declines of too many others, to abandon it now. Forty years old, tested and made stronger through experience, the law is still in its prime, ready and able to continue its role in rebuilding and conserving America’s fish stocks.

I intend to be there, watching its back, for so long as I’m able to do so.