A Rare Opportunity Exists To Protect An Extraordinary Animal

False albies are awesome… If you’ve ever stuck one, and listened to the sweet music of line screaming off your reel, you know this.

Undoubtedly, they are, pound-for-pound, the strongest, fastest fish regularly inshore of 20 fathoms, and in many ways they are the perfect light-tackle/flyfishing animal. 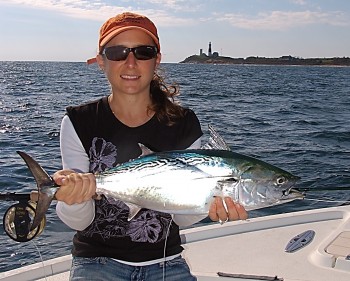 They don’t get very big — most are 5 to 12 pounds or so — yet, I’ve seen them burn up lesser reels, spool guys, dump 300-yards of backing… and of course bring smiles to many faces. Chasing fast-moving schools is pedal-to-the-metal high-adrenaline run-and-gun awesomeness.

In the fall they are probably more accessible than striped bass these days. Likely because very few people actually kill them.

There’s a good reason for that. They are gnarly.

Although I find it hard to believe, there are a few people who have allegedly discovered ways to prepare them, but really, I’d have to be in pretty bad shape, stuck on a deserted island or something, before I ate one. They are THAT bad.

So, two points I want to emphasize here. One, there’s not much of a commercial market for albies, at least not yet… because they just suck to eat. (Given the “underutilized species” movement — targeting less palatable but more abundant stocks — whether it stays that way is questionable.) Two, false albacore abundance is damn important to the recreational fishing community, particularly for light-tackle guides like me. While the Montauk striper run is really a shadow of what it used to be out there, false albacore keep guides employed and busy. Without them we’d be screwed.

That said, there’s currently some concern about the potential of a ramped-up large-scale new/developing fishery. Is it justified? I don’t really know. I sure hope it isn’t. But, according to at least one fisherman I know, the market price of false albacore has supposedly increased dramatically in the last few years, to the point that commercial guys are allegedly targeting them. Is it a large scale fishery? No. Pretty sure that thus far it’s hook and line, and hey, I don’t have any issue with that. But could it become large-scale really quickly? It sure as hell could.

When you think about the schooling behavior of these fish, then think about drift gillnets, or large purse seines, then you kinda get how these fish are susceptible. And while US pallets might be a little too refined for false albacore to ever gain real appeal, from what I understand there already are significant world markets for it. I mean, arguably, it could just be a matter of time. 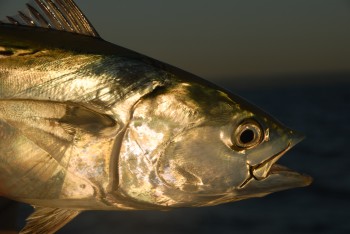 This kinda thing scares me, and other light-tackle guides. And it’s part of the reason we sought to include them in our initial list of species in the Mid-Atlantic Fishery Management Council’s Unmanaged Forage Amendment, which is currently under development.

I’ve written about the Unmanaged Forage action a few times in the last couple of years. But in short, we initiated an Amendment late in 2014 to prohibit large scale harvest of forage species currently not covered under any management plan, until there is science to determine if such harvest is sustainable. Not just sustainable from a harvest perspective, but sustainable in an ecosystem context. In other words we want to make sure there are enough around for predators.

But are false albacore “forage”? And can we protect them under this amendment as such?

To most inshore anglers, albies certainly appear to be more of a predator. But if you spend time in the deep, you know damn well they get eaten, A LOT. It’s no secret that a whole albie is one of the best mako baits around. And it isn’t infrequent to see them getting chased by billfish. They’ve certainly been found in the gullet of large tunas. In short, hell yeah they are forage. But it appears only for large pelagics. 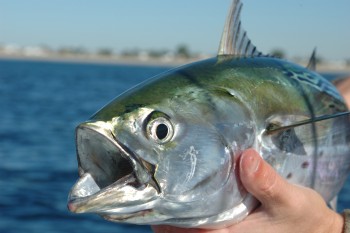 The initial guidance the Council has received thus far from NOAA Fisheries is that anything we include on the Unmanaged Forage List, must somehow be tied to Council managed species. (Note: the Mid-Atlantic Council does not manage large pelagics, like tunas and billfish). In other words we’d have to be able to prove that say bluefish eat false albacore, or that there’s some sort of gear interaction/bycatch in say the squid/mackerel/butterfish fishery. Pretty clear off-the-bat why this might be problematic.

But I’m not so sure such “initial” guidance is correct. Using its discretionary authority under the Magnuson-Stevens Act, the Council can “…include management measures in a plan to conserve target and non-target species and habitats, considering the variety of ecological factors affecting fishery populations.” National Standard 1 is pretty clear that “ecosystem component species” may be managed “to address other ecosystem issues.”

And the Pacific Council, which recently completed a similar action, included a lotta stuff that wasn’t directly tied to its managed species, but that everyone intuitively knew were eaten by large pelagics, birds, whales, dolphins, etc. They did this by using broad family classifications instead of specific species. If the Mid-Atlantic decided to go this route, albies would simply be included under the Scombridae family. Other species in that family, specifically chub mackerel, do indeed have a gear/bycatch nexus.

So why wouldn’t we want to include all, and protect all scrombridaes? I mean, the original intent of the Unmanaged Forage action, as I understand it, was to protect Mid-Atlantic forage species. Not just the food that summer flounder, bluefish, etc. eat, but the stuff that large pelagics and marine mammals eat also. Pretty sure the Council had the entire marine ecosystem in mind! Without a doubt, false albacore exist in the same time and space as many of the Council’s managed species. It is part of the same marine ecosystem. I mean few people could argue that this isn’t the case.

Heading off another large-scale fishery on false albacore, or frigate/bullet mackerel (also important forage for large pelagics) or Atlantic bonito is, in my mind, exactly the sort of thing the Council set out to do. And clearly false albacore is a species that the angling public is concerned about and wants addressed.

However, at the last Unmanaged Forage meeting a couple of weeks ago, the Council’s Ecosystem and Ocean Planning Committee, by a narrow margin, voted to take them off, along with bullet and frigate mackerel, and Atlantic bonito because they weren’t, in the majority’s mind, forage. One commercial committee member said, just because a “few” recreational people want them on the list doesn’t mean we should keep them on.

Wow… A FEW?! I think there are a ton of anglers that would really like to see false albacore protected! And they (we) shouldn’t just be brushed under the table.

The bottom line is they need to stay on the list. At least for now. So that a full and complete list of “considered” species can go out to the public. So that further analysis can be conducted, and so that the public has had an adequate chance to comment on it. It’s entirely possible, in fact likely, that such analysis will show a connection to Mid-Atlantic managed species. And the Council needs to see that the public is concerned about this.

Taking them out now makes little sense to me. It’s basically a big ‘screw you’ to the recreational fishing community who asked that it be considered.

If you’re pissed off, you should be. This was and is a very rare opportunity to not only protect an important forage source for large pelagics, but to protect an extremely important recreational fishery. At the very least it should receive full consideration by the Council and the public.

But be advised that this was merely a Committee vote. Removing false albacore, frigate and bullet mackerel, and Atlantic bonito from the Council’s list of Unmanaged Forage still has to be approved by the full Council.

And the Council will be considering this question next Tuesday in Montauk, from 1 to 4 pm at the Montauk Yacht club. New York, Connecticut and Rhode Island Anglers should attend, and let the Council know your concerns. If you can’t make it, a short letter or email explaining your experience with false albacore, why it’s important and why it should be protected in this amendment as an unmanaged forage species will likely help. You can find contact information here.

In short… Yes, I do believe that false albacore is forage. Maybe not in the traditional, low trophic level sense like, say, sandeel, but it does get eaten, in mass. More importantly, though, I don’t want to see it become the next large-scale slaughter. It’s too important to me… To us. And there’s a good opportunity to protect it in this amendment, right now!

5 comments on “False Albacore IS Bait”