In the first installment, I explained what scientists and angler/divers discovered about unique aggregations of lemon sharks in the vicinity of Jupiter. Because of archaic ways of valuing fish, these sharks are being decimated, despite ample science suggesting that what they actually need are stricter protections.

Yes, as objectionable as many find the practice of removing apex predators from marine ecosystems, commercial harvesting of large coastal species of sharks continues to take place in the United States. 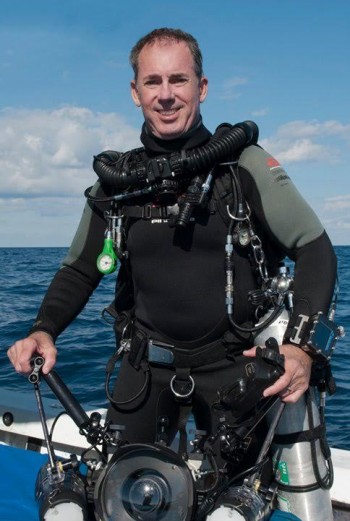 What separates us from other countries is that the United States has in place federal laws that prohibit “shark finning,” the removal of shark fins at sea and the discarding of the rest of the shark. And to the credit of the National Marine Fisheries Service Highly Migratory Species (HMS) Division, several species are protected from harvest, including sand tiger, bigeye thresher, Caribbean reef, dusky, sandbar, silky, great white, and longfin mako.

Among the sharks that are still hunted commercially, species include bull, tiger, hammerhead, and, unfortunately, lemon sharks.

Although in 2010 a coalition of divers, anglers, and conservation advocates succeeded in convincing the Florida Fish & Wildlife Conservation Commission to protect lemon sharks from harvest in state waters, the prohibition extends only three nautical miles offshore to where federal waters begin. Two-thirds of the lemon sharks’ aggregation zone off Jupiter and Hobe Sound lies in federal waters, three to five miles offshore, where they are easily targeted.

Once word was out that lemon sharks were aggregating off Jupiter, a few local commercial fishermen quickly figured out their locations. Data collected through the FACT array showed the number of sharks surviving to return to the aggregation sites declined sharply after the 2010 season, with the bottom basically falling out in 2013. That year, season opener for large coastal sharks was moved back to Jan 1st, as it will be for 2016. Back on November 30th, NOAA Fisheries posted the upcoming dates for the 2016 Atlantic Shark Commercial Fishing Season. So this year, again, the fishery will be open right when the few remaining lemon sharks settle into the waters off Jupiter.

Lemon sharks are categorized as K-selected species, meaning their growth and maturation rates are very slow. It takes them 12 to 16 years to reach sexual maturation. Females have a biennial (two-year) reproductive cycle, requiring a year of gestation. They produce a maximum of 18 pups, but in the world of large sharks, at best half of the pups will survive the myriad forms of natural mortality that they will confront.

Commercial fishermen targeting lemon sharks during the late winter and spring off Jupiter will kill many pregnant females, which typically pup in April and May. They will most likely kill half of the adult females present, 25 percent of which will be in their advanced state of pregnancy due to their biennial reproductive cycles.

Another cause for alarm is the threat to genetic diversity in the population. Dr. Demian D. Chapman, Associate Professor, School of Marine & Atmospheric Science at Stony Brook University, has performed DNA research on juvenile lemons around Cape Canaveral. Chapman found that the genetic make up between the Jupiter/Canaveral sharks is linked, and diversity is limited. The amount new DNA from outside contributors is probably marginal, which could indicate that the overall population along the North American coast from Florida all the way up to North Carolina may be smaller than we think.

Most of this information was presented to NMFS HMS back in 2012 and 2013. We also supplied them copies of the Kessel/Gruber peer-reviewed Jupiter lemon shark report, published November 6, 2014. But to our dismay, HMS will continue to allow harvest on lemon sharks as part of the Aggregated Large Coastal Sharks list fishery.

The news of this decision to open the season in January, of course, created a firestorm of outrage among both divers who regularly dive the Jupiter area and shark advocacy groups. They fired off letters and petitions. Some of the more extreme groups and individuals began referring to NOAA as new acronym for No Oceans Alive Anywhere.

I personally contacted Margo Schulze-Haugen, Highly Migratory Species Division Chief. During my phone conversation with her, I attempted to explain the vulnerability of these aggregations to overfishing, the ecological importance of lemon sharks, and their economic importance as a dive tourism draw for Palm Beach County.

Schulze-Haugen maintained that the decision was based on the service’s data and after input from HMS’s Advisory Panel. That panel consists of 48 members; 17 have a direct interest in commercial fishing, and another 12 have recreational fishing interests. Ten state wildlife/fisheries department reps, five individuals in the fishery research field, and four representatives from environmental organizations, including Oceana, Environmental Defense Fund, and Department of Commerce. They are supposed to manage fish populations for “the greatest benefit of the public.” Even though shark fins may sell for a premium, shark meat sells at less than a dollar a pound around here. I have a very hard time believing that the dead-on-the-dock value of a shark exceeds its value swimming alive in the ocean.

These sharks are tremendously valuable ecologically. Ask any marine ecologist and they’ll point out that fisheries managers rarely factor into the equation the ecological values of fish. As apex predators, lemon sharks play exceptionally valuable roles as scavengers and as predators that improve the health and vitality of lower-level populations, by culling the sick and weak from the gene pools. In those capacities, lemon sharks are vitally important to the health of our coral reefs and estuaries, which, by the way, are in serious trouble due to pollution, dredging, climate change, and overfishing. These agencies need directives to manage fisheries through the lens of ecosystem-based fisheries management, instead of managing species by species with the regulatory focus only on the amount of fish left in the oceans.

And they need to stop managing fisheries explicitly for the sake of commercial fishing. Ask any hotelier that works with local dive operators, and they’ll cite the importance of the local dive industry in terms of supplying a steady stream of well-heeled dive tourists. Despite our ecological woes, the waters off Palm Beach County are internationally renowned for their relative abundance of globally rare megafauna, including sea turtles, goliath groupers, and until recently, lemon sharks. There is no way that the value of those dead sharks even remotely equates to what people pay to fly here, stay in a nice hotel, eat out, and charter a dive boat.

Besides, if it is true that lemon sharks only constitute four percent of the commercial take of large coastal sharks, are we really taking very much away from the commercial sector by recognizing higher forms of value?

To the best of my knowledge, there are no laws preventing NMFS HMS from recognizing the values of fish species left alive in the water for the related economic benefits of healthier ecosystems and tourism. We just have to convince them to do it.

So where does that leave us?

NOAA clearly will not close or change the dates for the overall commercial shark fishing this year. However, an emergency rule option to shut down the fishery in a localized area and/or on a particular species as a whole for 90 days is possible.

There is precedent. Twenty-five years ago, NMFS issued a 90-day closure based on an emergency petition to protect imperiled Goliath groupers. That move set the species up for a place on the protected list, which has allowed the woefully overfished population to recover significantly.

Since Florida had already made strides getting lemon sharks protected in state waters, we should all urge the FWC to petition the federal government to protect lemon sharks, at least in this area where they are so vulnerable to overfishing.

Their ears may be opening. I have heard that NMFS has already been studying the Jupiter aggregation as part of a habitat area of particular concern (HAPC) designation. That’s good. Because of the region’s complex interconnection of estuaries, beaches, reefs, and currents, these waters deserve much greater scientific attention and protections.

So yes, I think it is possible. But, it won’t get done on its own without plenty of involvement from the public. This can be done by writing to each and every member of the FWC Commission, and you will find the full list of members right here.

Walt Stearns is a renowned underwater photographer and research diver, with thousands of dives recorded all around the world. Walt is also an avid recreational fisherman. His byline has appeared in nearly very major recreational fishing and diving publication in the world. He is currently Publisher of The Underwater Journal. He lives in Palm Beach Gardens, Florida.
View all posts by Walt Stearns →