On January 11th, 2001, I chanced upon something that had never been recorded in the waters off Florida’s southeast coast, near Palm Beach. On sand bottom, at a depth 87 feet were 40 — perhaps more — adult lemon sharks (Negaprion brevirostris), resting as if taking naps with their noses pointed into the current. I was struck by how they where positioned so close together, mere feet from one another, lending a strong resemblance to a fleet of cars in a parking lot. I carefully photographed the sharks, for the sake of scientific documentation. 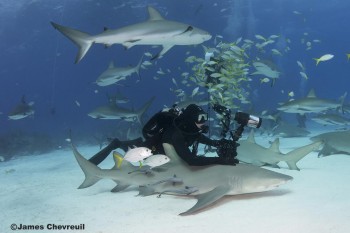 Measuring up to eight feet long, and weighing up to 300 pounds, lemon sharks are impressive looking creatures, and certainly no stranger to divers and fishermen in south Florida waters. A relatively tropical species, they are most easily identifiable from most other large coastal species of sharks by a very distinctive yellowish to golden brown coloration, along with the presence of a secondary dorsal fin slightly smaller in size and set well back behind the first. Then there is also the fact that they rest on the bottom like nurse sharks. Most shark species live in perpetual motion, so that sufficient oxygen constantly flows over their gills.

Subsequent repeat visits to this first site off Jupiter, Florida confirmed that it was not a fluke event. On some days the school would consist of 60 to 90-plus lemons. By the end of March, the aggregations would vanish, and not reappear till the following winter. For unknown reasons, very specific locations attracted them. The aggregation sites included a handful of locations offshore of Jupiter, south to Juno Beach and north to the bottom end of Hobe Sound.

I immediately wondered whether I’d discovered a spawning aggregation. Sharks, like mammals, actually mate and give live birth to offspring. It’s really rough sex, with the male biting into the female in order to hold on. Research shows that lemon sharks are quite sociable, and enjoy the benefits of group living, such as enhanced communication, courtship, hunting in packs, and protections. Yet among the sharks that we documented in these social aggregations, none of the females had bite scars around the pectoral fins, and some appeared to be in advanced stages of pregnancy.

In 2002, seeking answers, I contacted Dr. Samuel Gruber, one of the leading authorities on lemon shark biology and natural history. After reviewing several images that I’d taken of the sharks, “Doc” quickly confirmed that the phenomenon, which he described as a large social aggregation, was completely unknown to the scientific community. In fact, such a phenomenon had never been documented anywhere on the planet!

The discovery naturally led to a cooperative research project involving scientists, as well as expert angler/divers, including Capt. Mike Newman and me. We set out to find why these sharks aggregate inside the wedge-shaped, 45 x 7 x 3-mile geographic area that we thought we understood so intimately.

A series of Vemco® VR2 and VR2W acoustic receivers, placed up and down the coast between Florida Keys and the USA-Canadian border, allows scientists to track migratory species. When a shark — or any other acoustically tagged species — swims by a receiver, the individual is recognized by the ping it records. The Jupiter Lemon Shark Project team moored 19 such receivers in 60 to 105 feet, between Hobe Sound and Boynton Beach. Comprising eight other research groups, the Florida Atlantic Coastal Telemetry (FACT) networked the array. These groups included researchers from the National Marine Fisheries Service (NMFS), Florida Fish & Wildlife Conservation Commission (FWC), and several universities including Florida State University, Florida Atlantic University, and Nova Southeastern.

The FACT array revealed that the lemon sharks return to these same places year in and year out, and stay for a long time. More than 97 percent of the total detections recorded off Jupiter occurred between December and April.

Other instruments, namely a thermometer, helped solve why the sharks prefer these areas to similar habitats to the north and south. They’re simply comfortable here. Lemons, for the most part, are a tropical species that don’t like it when water temps drop below 67°F. The temperature envelope they prefer during winter apparently is between 74°F and 68°F. The temperatures remain stable because the mighty Gulf Stream current flows against and across the continental shelf. Off of Jupiter, the shelf starts to broaden from its narrowest width along North America. This change in topography creates a conversion zone that keeps temperatures stable while supplying nutrients that support the entire food web.

In spring, when water temps rise above 75°F, the majority of lemons move out, leaving a small local population behind until their return in winter.

Through the FACT, we discovered that the majority of these wintering sharks head north in and around Florida’s Cape Canaveral area and up the Georgia Coast near Savannah, with one hit coming from an individual off Cape Hatteras, North Carolina.

Thanks to scientists and watermen working together, we have learned a great deal about this lemon shark aggregation phenomenon and about lemon shark migrations. This information should inform better fisheries management decisions. Unfortunately, the National Marine Fisheries Management Service — their Highly Migratory Species division — is ignoring these discoveries. They’ve failed to recognize how vulnerable these aggregations are to exploitation, and indeed the aggregations keep getting smaller and smaller. In my next installment, I’ll explain the controversy.

Walt Stearns is a renowned underwater photographer and research diver, with thousands of dives recorded all around the world. Walt is also an avid recreational fisherman. His byline has appeared in nearly very major recreational fishing and diving publication in the world. He is currently Publisher of The Underwater Journal. He lives in Palm Beach Gardens, Florida.
View all posts by Walt Stearns →

2 comments on “Shark Discovery! [Part One]”