Red snapper are one of those fish that often gets labelled as “iconic.” It’s hard to put a finger on exactly why this is so — maybe it’s because they’re big and bright red… or because they fight like hell on the line… or even because they are one of the tastiest fish in the sea (in my opinion). Maybe it’s because of their rags-to-riches story — a fish population beat down to almost nothing, then resuscitated and brought back to life by a management plan that helped rebuild them to some of the highest levels seen in recent history. Or maybe it’s because of the seemingly endless showdown in the Gulf of Mexico between those who want to catch red snapper for fun and those, like the hard-working men and women I work with, who sustainably harvest them for consumers like you to enjoy on your dinner plate. 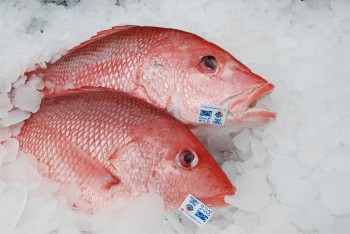 The good news is that there are more red snapper in the Gulf now than there have been in years. Recent recruitment is high, meaning that more baby red snapper are surviving long enough to become big red snapper. Red snapper are also getting bigger, and on average weigh almost twice as much as they did 8-10 years ago. And the red snapper population is expanding as well. Whereas historically the bulk of the population was found in the Western Gulf, now fishermen on the west coast of Florida are catching more and more red snapper. More fishermen are seeing more and bigger fish, and they’re getting easier to catch. That’s a good thing, right? So what’s the problem?

So how do we solve a problem that we can’t agree upon? That’s simple — we don’t. At least not all at once. Instead, let’s walk these issues back to some core concepts that we can all agree on.

Commercial red snapper fishermen report every pound of fish they catch to the National Marine Fisheries Service (NMFS), which is validated by the dealer they sell their fish to. But in this age of technology, these fishermen are still using paper and pen and the US Postal Service. Charter and private recreational fishermen don’t have the same requirements to report the way the commercial fishermen do; instead, the Gulf States and NMFS primarily rely on dock intercepts, and mail and phone surveys. These surveys don’t always end up being very accurate and often take time to complete.

Stock assessments are a comprehensive scientific analysis of a fish population that relies on federal and state partnerships and funding. Right now, red snapper are only assessed every 3-5 years. This means that we’re only checking in to see how red snapper are doing 2-3 times a decade. When we do, and if we find out we’re not on track, we need to correct our course. Sometimes this can mean drastic changes in quotas or fishing seasons. If we took a quick “snapshot” of red snapper every year, these course corrections may not need to be so large.

Reauthorization of the Magnuson-Stevens Act is a good place to improve red snapper science. While doing so will definitely help red snapper fishermen in the Gulf of Mexico, it will also help improve fishery science throughout the US. Electronic data collection and stock assessments are national issues with regional implications. The reauthorization bill passed by the House of Representatives (HR1335) establishes a framework to develop electronic monitoring programs and helps enhance cooperative research opportunities, but falls short of improving catch reporting data and advancing a system of annual stock assessments. Since we may not see another Magnuson-Stevens Act reauthorization for another decade (the last two were in 1996 and 2006), we can’t afford to let this once-in-a-decade opportunity to go by without making even stronger improvements to fishery science. Better fishery science means stronger fishing businesses.

By setting sustainable fishing limits on red snapper and adhering to them, fishermen are practicing conservation. In the Gulf of Mexico, the commercial fishery has stayed within its sustainable limits since individual fishing quotas (IFQs) were established in 2007. Fishermen received an individual quota of red snapper to harvest throughout the year and weren’t constrained by time; the stipulation being that they needed to stop fishing once their quota was reached. However, the recreational fishery, which didn’t have these “hard” caps, caught too many red snapper in six out of the last eight years by an average of 50%. Over 18 million pounds of “extra” fish were caught (above what is considered sustainable) by the recreational fishery during this time due to the fact that recreational fishermen weren’t given a good management plan that stopped them from taking too many red snapper too quickly.

Red snapper aren’t scheduled to fully rebuild until 2032. That’s seventeen years from now. There’s no legitimate reason why managers should push this date back even further. Yet HR1335 could very well allow that.

Reauthorization of the Magnuson-Stevens Act shouldn’t weaken annual catch limit (ACL) requirements. HR1335 allows ACLs to be further influenced by a range of economic, social, or “ecosystem” factors. The impact of this will likely result in ACLs being inflated beyond what would be scientifically justified. This can hurt stock rebuilding and diminish fishing opportunities in the future.

As the red snapper fishery continues to rebuild, quotas are generally remaining stable or increasing. This allows for long-term business planning for commercial fishermen, helps promote conservation, and stimulates profitability. However, the Gulf of Mexico Fishery Management Council (Gulf Council) has been embroiled in a years-long discussion about how to take red snapper quota from commercial fishermen and redistribute it to the recreational fishery. Not only that, Congressional politicians from Gulf States annually introduce a never-ending stream of federal legislation intending to do the same thing.

Reauthorization of the Magnuson-Stevens Act should not mandate regional red snapper reallocation considerations. Reallocation is a huge threat to commercial red snapper fishing businesses and communities in the Gulf of Mexico. This “reshuffling of the deck” will impose economic harm on hundreds of small fishing businesses in the Gulf of Mexico that deliver millions of pounds of domestic seafood to the American consumer. Furthermore, federal legislation shouldn’t be mandating regional allocation discussions — this sounds like federal overreach to me. The Gulf Council, made up of regional representatives who are directly involved in these issues, is in the better position to determine if/when such a discussion should happen

Magnuson-Stevens is working. It is providing economic stability and profitability to fishermen and fishing communities by rebuilding important fish stocks. In fact, the number of fish stocks listed as overfished or subject to overfishing in 2014 has dropped to the lowest levels since records started being kept in 1997. The Magnuson-Stevens Act is a solid backbone for our fishery management process and deserves to be protected, not weakened. The commercial red snapper fishermen in the Gulf of Mexico believe that HR1335 is not the answer that we and American consumers are looking for in order to protect our future. Let’s not waste this once-in-a-decade opportunity to do what’s right for our fish, fishermen, and fishing communities.

Eric Brazer grew up on a fishing boat off the coast of Maine and now runs the Gulf of Mexico Reef Fish Shareholders' Alliance, an organization of conservation-minded commercial reef fish fishermen in the Gulf.
View all posts by Eric Brazer →