June –- the time of year to be on the ocean chasing coho and chinook out of coastal ports. Moving out in the early morning, hopefully on flood or slack tide, with the expectation of finding the quarry before mid-day winds point the boat back toward a comfortable harbor.

Most of us fishing the ocean take out a variety of common baits and will check stomach contents of our first catches in an effort to “match the hatch” and provide what they are feeding on. It is always concerning when you find an empty stomach. The first thoughts are where is the forage? Is there enough out here for our sport fish to eat?

In July of 2012, we started a new venture to ensure salmon and steelhead would have enough to eat in the ocean so that they could grow fifty times their smolt size and become what we think of and yearn for when they grow to adults. 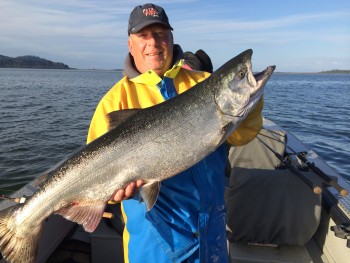 As of March this year, we came away with two things. First, the Pacific Fishery Management Council directed NOAA Fisheries to put unmanaged forage fish into fisheries management plans as an ecosystem component, protected from directed catch until the populations can be assessed and catch limits determined based in part on the needs of predator species higher in the food web.

While we primarily use herring, anchovy, and (a few of us) shad for bait in the ocean, salmon and steelhead certainly eat a lot of these as they grow bigger. Much of their diet consists of smaller, lesser known forage species such as sand lance, small squids, and saury. These typically smaller forage species are not currently targeted by commercial fisheries off our west coast, but are being fished and even overfished in other parts of the world. It would only be a matter of time before it happened here had it not been for the actions taken this March.

A major component of these actions was establishing ecosystem-based management of these species. This means catch limits would not only be based on the health of the target species population, but also the impact the catch would have on the predators that depend on them. Managed species such as herring should also be managed with this consideration.

Improving forage fish protections must be a key component in the Magnuson-Stevens Act currently working its way through Congress. Although some protections currently exist, the law must do a better job of taking into account the needs of predators within the ecosystem. Without these protections pro-actively put in place, the world’s demand for this limited resource will soon come knocking at our door. Now is the time to act, to produce a long-standing prey base for our most socially and economically important species before a growing global demand for this resource compromises our local ocean ecosystems.