Are people really still saying we should manage everything like striped bass? 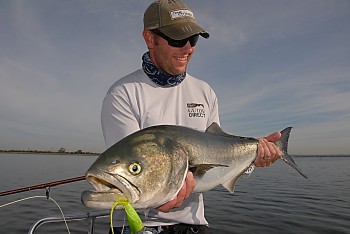 It’s been an odd year thus far. A completely different paradigm than what most of us had become accustomed to. Generally, we start seeing good numbers of stripers in early to mid-April. Yes, it was an unusually cold winter and a cold April to boot. So I didn’t really expect to see much of a run until late in the month. But, what I really didn’t expect is that the first fish I’d see would be a bluefish. That’s never happened to me before this spring.

Yes, every year is different, but in my neck of the woods the stripers usually show up several weeks, sometimes over a month, before the blues. Yes, there are a few stripers around, but from South Jersey to the East End of Long Island—pretty-much striped bass central—there are A TON more bluefish than bass.

This, I believe is not merely anecdotal, or some cyclical anomaly. If you’re reading this, you’ve certainly read about, and probably have seen first-hand, the decline of the striped bass resource. It’s pretty darn obvious that there are far fewer stripers around then we had during the boom years. Since 2008 I guess, the striped bass situation has gotten progressively worse. 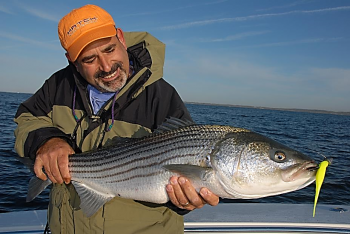 No, the sky is not falling, at least not yet, and we’re not looking at another moratorium (please stop saying that, people). And yes, there are still opportunities to catch striped bass, but mostly in those condensed bodies of fish in isolated bodies of water (e.g. Raritan Bay up until this weekend). As I’ve said many times before, what matters most isn’t where the fish are, but where they aren’t, and they sure as hell aren’t in most of the places they have historically been and should be this time of the year.

In my two-decades on the water, it’s pretty clear to me that “nature abhors a vacuum.” No juvie menhaden in the fall (a.k.a. peanuts), you get sandeels, and vice versa. There are a ton of examples. And I believe we’re seeing another one staring us in the face with these bluefish. Of course I can’t say for certain, but it seems pretty obvious to me that these gator blues are filling in that striped bass void.

Let me go a step further and say I think that’s pretty much because bluefish are jointly managed with the Feds and thus are managed way more conservatively than, well, just about anything the states manage… ehem, like striped bass.

If overfishing is occurring, then by law, corrective measures have to be taken to end it, generally within a year. If the stock is determined to be “overfished,” or even approaching a condition of being “overfished,” federal managers must institute a rebuilding plan ASAP. 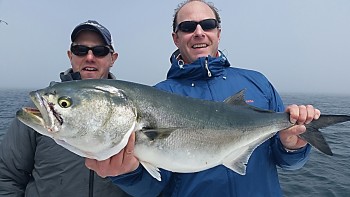 Federal managers also adopt levels of precaution that account for the inherent uncertainty on both the science and management sides. Plus there are “accountability measures” with federally managed species. Both help to ensure that overfishing doesn’t occur in the first place.

But, none of this applies to striped bass, because the species is managed exclusively by the states… or more specifically a consortium of states called the Atlantic States Marine Fisheries Commission (ASMFC), which, frankly, has failed to conserve just about everything it’s managed, precisely because it is under no legal obligation to prevent overfishing, or rebuild stocks.

What happened with striped bass, which is ironically one of ASMFC’s better managed species?

Well, in 2013 ASMFC was presented with a benchmark stock assessment, which made clear that the Chesapeake Bay, which normally produces about 80% of the costal stock, just wasn’t producing the fish it was prior to 2003. It showed that overfishing had occurred repeatedly over the last ten years, and it indicated the stock had around an 80% chance of being “overfished” by this year.

No surprise to any of us who have spent more than a few days on the water in the last decade. We’ve seen it firsthand—less fish around, and way too many being killed when those isolated but condensed schools of fish passed through.

Yet, instead of taking prompt action and implementing measures that would reduce fishing mortality, ASMFC just kinda talked about it for a year, with the kill-more advocates questioning the merits of the stock assessment and whether the fishery was really in trouble. It took an entire year and a huge public outcry before ASMFC was compelled to take any action.

Yes, they finally cut the catch for 2015, but probably not by enough to turn things around. A 25% reduction in landings was originally proposed—and even that had only a 50% chance of reducing mortality to the target level—but during the development of the addendum, that “coin’s toss” chance decreased even further. Commercial cuts were applied to the quota rather than actual landings, so the addendum could actually result in an increase in commercial landings. The Commission also made an exception for the Chesapeake states, requiring only a 20.5% reduction as some sort of compromise.

On the recreational side, ASMFC recommended a one fish bag limit (down from 2) and a 28″ size limit. But they also allowed for something called “Conservation Equivalency,” a loophole that would allow states to create their own regulations as long as they, at least on paper, achieve the same 25% reduction. So if the states could justify killing two stripers per person per trip, arguing that it won’t do more damage than taking just one, then they could do so. Fortunately, most states saw the folly in this and stood up to special interests, with New Jersey and Delaware being the notable exceptions.

So… the action ASMFC took is more likely to fail than to succeed, it won’t really prevent the stock from becoming overfished, and it probably won’t do anything to rebuild it.

In short, we’d likely be in a better place on striped bass than where we are now.

Getting back to bluefish, maybe it is a stretch to say that their recent abundance is due to their management by the feds. After all, they didn’t have the recruitment problems that striped bass had/have, and well, due to an undeserved reputation for being poor table fare, most people aren’t trying to kill a lot of them.

But it’s also worth of noting that, while the 2014 stock assessment update found the bluefish resource to be in good condition, a benchmark assessment is currently being conducted, and the rumor is that things might not look so rosy. Yeah, that may not jive with what we’re seeing on the water this year, but that isn’t the point. The point is that IF the assessment reveals a problem, federal law requires that we address it ASAP. That’s NOT the case with striped bass, or anything else managed just by the states.

The irony of all this is that that all those short-sighted folks who want to change federal fisheries management law to allow more “flexibility”—those supporters of HR 1335, a bill that will undoubtedly weaken the conservation provisions of federal law—are going around using striped bass as an example of a successfully managed state fishery and a model of how they want federally managed species managed… which is just stupid.

Most, if not all of this is coming from the red snapper crowd, who apparently don’t really understand the situation up here, or maybe intentionally see things differently than, I dunno, the people who actually fish for striped bass? It’s irritating to say the least.

When you look at species like bluefish that are managed by the federal Mid-Atlantic Fishery Management Council (none are overfished and overfishing isn’t occurring), and then compare them to the train wreck of species that ASMFC manages, it’s as clear as night and day. States suck at managing fisheries… precisely because they don’t have those mandates in federal law that force them to do the right thing!

We all need to understand this as the Magnuson-Stevens Act (the law that governs federal fisheries management) reauthorization looms, bad bills are introduced and people say dumb things like everything should be managed like striped bass.

I don’t want that. I don’t think you do either.

If anything, any change in the law should require states to manage their fisheries like… well, like bluefish! But certainly not the other way around.