With the kid growing up (read: friends now more important than parents) and more free time on my hands (read: kid no longer in dance class), plus an understanding wife, I’ve had an opportunity to get out more as a sportsman than a professional fishing guide lately. I have good fish and wildlife management as well as friends to thank for that. Oh yeah, and then there’s the Pacific Ocean.

Whether it was taking in a lush green forest in central Oregon in pursuit of wild turkey, or prawn fishing in Puget Sound, it’s been a good year. Granted I’m grateful that they still make grocery stores, because I’d never make it as a pioneer. 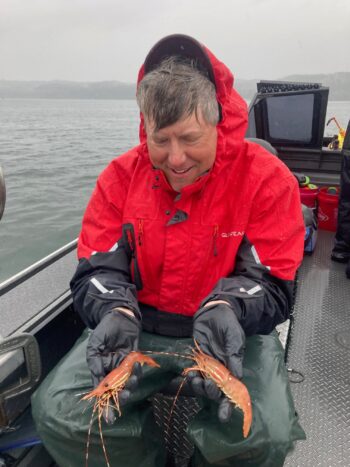 Bob Rees with prawns, the latter headed soon to the barbie.

This year’s experiences can’t be captured on paper or picture. You just can’t put someone in the places you’ve been or the experiences you’ve had; they have to do it themselves. I got to help my dear friend Stevie pursue cow elk in the Tillamook State Forest in February, dory fish out of Pacific City in March, turkey hunt in the Umatilla National Forest in April, prawn fish in Puget Sound in May, and halibut fish on the Oregon Coast in June. Grand total of take was a couple of lingcod, an easy limit of spot prawns (80/person) and 1/3 take of a 30″ halibut (about 2 pounds) and some crab. Lewis or Clark I am not.

But still, how do you put a price on this kind of opportunity? It’s priceless.

Many sportsmen are critical of our state and federal fisheries agencies on how they manage fish. If there’s one thing I find consistent amongst these critics is that they spend more time in the field (good for them) and not much time in the capital or around any of those that do. It’s too bad, as they are as passionate about protecting these resources as anyone, but they just choose not to engage in problem solving. Some of my friends even tell me the facts I’m presenting to them are “fake news.” That really disturbs me.

State and federal managers spend an exorbitant amount of time and resources producing data that managers can use to guide fishery regulation and opportunity. Unless my fake news friends can fund and dedicate the resources necessary to produce their own factual information, let’s leave it to the professionals. No matter what your opinion, data collection is vitally important to fish and wildlife management. The Magnuson-Stevens Act reauthorization is the perfect place to solidify a fact-based future for fisheries management.

I’ve been a port sampler for salmon and sturgeon, and an at-sea fisheries observer, monitoring the commercial catch of yellowfin sole, rock sole, Pacific cod and a plethora of other species. Although only achieving a C- in statistics class, I still have come to understand and trust the data gathered and processed for management of these stocks. One of the problems remains, however, that not all stocks are assessed, creating data gaps and obstacles for opportunity for harvest, set aside a productive future for the species. It’s expensive and time consuming, but worth the investment of time and resources given the dependence of working waterfronts for our coastal communities.

Maybe most befuddling is the inconsistency nationwide as to how data is gathered, if at all, to guide season structure and harvest guidelines for specific species of fish. It’s unheard of on the West Coast, but I’ve heard some Gulf and east coast states don’t subscribe to the same level or oversight we have in other regions of the country. Keep in perspective, however, we have several Endangered Species Act listed salmon, and their data collection is federally mandated.

Whether mandated by law or not, which user group in their right mind wouldn’t want accurate information on the fisheries they participate in? Countless examples of fishery collapse can be cited (and repeated) for not having the information available to keep stocks at healthy enough levels for sustainable harvest. No one wants to repeat that scenario; it’s why the Magnuson-Stevens Act was brought about in the first place.

Instead of fishery restrictions like we’re seeing on the East and Gulf Coasts, West Coast fisheries are only getting more liberal in harvest:

The bottom line is, effective data gathering and fisheries management pay dividends. Treat port samplers with the respect they deserve, and do your part in responsible fisheries management. Help us continue to advocate for adequate funding and management guidelines that ensure a future for the next generation of sport and commercial fishers.

Now let’s all put some shrimp on the barbie!