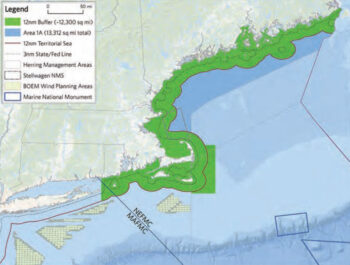 On April 21st, NOAA Fisheries announced that the Atlantic herring buffer zone, also called the inshore midwater trawl restricted area, would no longer be enforced as a result of a District Court ruling to vacate the measure. The decision was brought about by a lawsuit filed by the Sustainable Fisheries Coalition, an industry group comprised of herring and mackerel fishing businesses. Since January 2021, midwater trawling had been prohibited 12 nautical miles from the shorelines of the New England states and even farther around Cape Cod to encompass a known river herring bycatch hotspot.

Midwater trawl vessels are the largest vessels in the Atlantic herring fishery, and they often work in pairs, towing a net up to 200 FEET long between two vessels. Millions of herring can be quickly removed from a relatively small area, and this can lead to localized depletion, when predators in an area are left with insufficient prey. Numerous predators, from whales and seabirds to striped bass, tuna and cod depend on Atlantic herring – the linchpin in the New England food web.

Though a long list of stakeholders provided firsthand accounts to the New England Fishery Management Council about the impacts of inshore midwater trawling on predators that they depend on for their businesses (e.g., recreational charters, commercial tuna fishing, whale watching, etc.), District Court Judge Leo T. Sorokin, in issuing his ruling, argued that anecdotal support for the buffer zone was not “an adequate substitute for scientific evidence of localized depletion and its link to MWT [midwater trawl] vessels.”

Current fisheries data collection programs are not set up to detect localized depletion. Instead, the New England Council relied on analyses that investigated when and where midwater trawling overlapped with the activities of other users of the Atlantic herring resource. Citing a lack of evidence, the judge disagreed that user overlap is a reliable proxy for localized depletion. As of this writing , the Department of Justice has not announced a decision to appeal the case.

“The New England Council got it right when they overwhelmingly approved the buffer zone,” said Wild Oceans Executive Director, Pam Lyons Gromen. “They acted in the best interest of the health of the herring resource and its many users, and we will urge them to prioritize a new plan to conserve herring inshore if an appeal is not filed.” 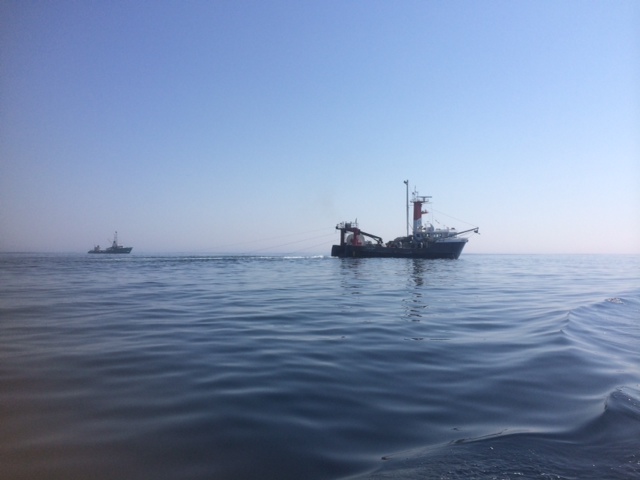 Two Atlantic Herring vessels towing a mid-water trawl between them off the back side of Cape Cod in 2015. There is a small mesh net between these two boats. Photo by Capt. Alan Hastbacka

View all posts by Wild Oceans →