On November 10, NOAA began a 60-day comment period (ends January 10, 2022) for the public to tell NOAA what they think about the proposed designation of the Chumash Heritage National Marine Sanctuary. As NOAA Administrator Rick Spinrad stated in a video announcement:

Some of the earliest documented human occupations of North America are found along California’s Central Coast. This is where multiple bands of Chumash and other indigenous peoples thrived and served as the first stewards of the rich waters, and abundant wildlife for thousands of years.

In 2015, the Northern Chumash Tribal Council nominated The Chumash Heritage National Marine Sanctuary. It was added to the Sanctuary Inventory in October 2015 and renewed for another five years in September 2020.

The proposed area is approximately 7,600 acres and includes 156 miles of coastline. It extends offshore to include Santa Lucia Bank, Rodriguez Seamount, and Arguello Canyon. 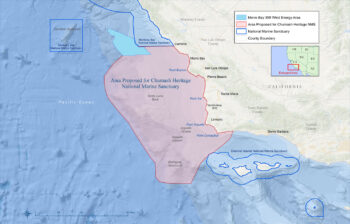 The coastal communities in the proposed sanctuary footprint are economic centers of activity. The area is a historically important transportation corridor. More than 200 shipwrecks, two of which are listed on the National Register of Historic Places, rest on the ocean floor.

“This special section of coast supports a way of life for many communities that rely on commercial fishing and enjoy recreational fishing, kayaking, surfing, diving, and wildlife watching. NOAA heard strong support from tribal leaders, a diverse set of groups, state officials, and several members of the California congressional delegation for moving forward with this proposed national marine sanctuary,” said Spinrad in a news release. 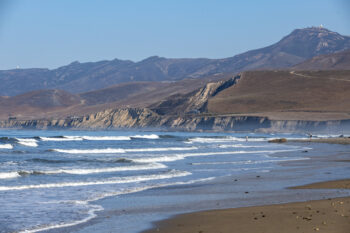 To submit written comments, go to the Federal eRulemaking Portal. The process is as easy as clicking on the “Comment” icon, completing the required fields, and entering or attaching your comments.

NOAA is looking for specific feedback including:

There will be three virtual meetings for public comments. You must register in advance of the meeting using the registration links below each date.

This action by NOAA’s Office of Marine Sanctuaries is a step forward in a process that takes time. Following the public comment period, NOAA will draft a proposal (likely available to the public late 2022) which will have its own comment period. If NOAA decides to proceed with the nomination, it will prepare the final documents (likely available to the public in the fall of 2023) and review them with State of California’s officials and the U.S. Congress. Official designation action will take place after that review.

The Network will follow the progress of the proposed Chumash Heritage National Marine Sanctuary and provide updates as actions warrant.