UPDATE: On July 31, the U.S. House of Representatives passed funding legislation that included an amendment, sponsored by Rep. Jared Huffman (CA), and co-sponsored by Reps. DeFazio (OR), Speier (CA), Levin, (CA) and Rouda (CA), preventing any funds from being used by the Army Corps of Engineers to issue the Record of Decision for the proposed Pebble Mine project. No similar action in the Senate has taken place.

On July 24, the U.S. Army Corps of Engineers (Corps) released the final environmental impact statement (EIS) for the Pebble Limited Partnership’s permit application for the proposed discharge of fill material into U.S. waters and other activities in navigable waters. The final EIS is available for download at PebbleProjectEIS.com. 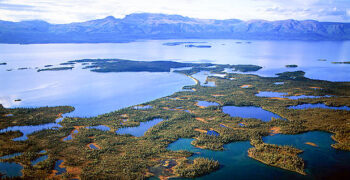 While the final EIS is not a permit decision and does not authorize the mine construction or mine plan of operations, it is an important step forward in the permitting process for this disastrous mining project. The next step is the Corp’s “record of decision” on the permit application. The record of decision is expected to be released in the fall of 2020 and could come as early as the end of August.

To remind readers, the Pebble Limited Partnership is seeking to develop a copper-molybdenum-gold mine in the Bristol Bay region of Alaska, which is home to the largest sockeye salmon run in the world. The Marine Fish Conservation Network has repeatedly voiced its opposition to this project, and the final EIS does not change that opposition. While the Corps and the developers may consider this review adequate, we continue to believe that the Pebble Mine project is, in the words of Alaska’s former Senator Ted Stevens, “the wrong mine in the wrong place.”

Backers of this mine ask Americans to forgo a sustainable, domestic resource that has supported native communities and small businesses bringing healthy seafood to our dining tables for an extraction venture that has the potential to cause irreparable harm for years to come. As we increasingly recognize the importance of seafood to our country and continue to work to supply high-quality, domestic seafood to America’s table, we should be doing everything in our power to protect those resources rather than risking them for mineral extraction by a foreign company.

Despite the large and growing opposition to this project from a variety of stakeholders, we hoped that the Corp would recognize the wisdom of Senator Stevens’ words. Unfortunately, with the Corp’s release of what most believe is a flawed EIS, we see now this isn’t the case.

The Environmental Protection Agency or Congress must act now

The Environmental Protection Agency (EPA) has an obligation under the Clean Water Act to protect our nation’s most pristine waters and fisheries. We believe the EPA should fulfill its legal obligation and should veto this project to protect the people, our natural resources, and Native and American fishing traditions.

If the EPA does not take action and lets this project move forward, then the MFCN encourages and supports Congressional action to stop this project.

The Committee notes that multiple Federal agencies commented to express their concerns that the DEIS is inadequate and does not meet the Army Corps’ obligations to thoroughly evaluate the potential impacts of the proposed project. The Committee shares the agencies’ concerns that the DEIS lacks certain critical information about the proposed project and related mitigation and therefore likely underestimates its potential risks and impacts.

This week at a Senate Commerce Committee hearing, Senator Maria Cantwell (D-WA), the ranking member on the committee, noted:

Instead of focusing on getting recovery dollars out the door to protect the seafood sector, the administration is paving the way towards permitting the Pebble Mine. It is beyond unconscionable that the administration continues to threaten the largest salmon fishery in the world instead of focusing on the catastrophic failure that we are seeing because of the pandemic. This is like a one, two gut punch to the industry…So as I have said many times, we must let science lead, and the administration is not listening to science and NOAA is not sticking up for the science.

Our colleagues at Trout Unlimited, Orvis, and Katmai Service Providers voiced concerns in a recent press release about the final EIS. The joint release pointed out that the final environmental analysis for the proposed Pebble Mine shows more than 191 miles of streams and 4,614 acres of wetlands would be impacted if phase one of the proposed Pebble Mine advances, with 185 miles and 3,841 acres facing permanent impacts.

“Granting this permit would hand over the keys to America’s most valuable salmon fishery to a foreign-owned company with no history of successfully developing or operating a mine,” said Simon Perkins, president of The Orvis Company. “The proposed Pebble mine represents not only a direct threat to the fishery, but also a significant threat to the outdoor economy and commercial fishing industry, which so many businesses and communities in Bristol Bay and nationally rely on for financial security. If we care about American jobs, industry, environment and culture, the only reasonable option at this point is to deny the permit.”

“This process has outlined significant destruction of critical fish habitat and it is acknowledged by the Army Corps that the likelihood of expansion is highly probable, thus making the current plan unrealistic. The document also assumes that Pebble will be able to cross private lands, which, as of now, it does not have the permission to do,” said Brian Kraft, president of Katmai Service Providers. “If this administration wants to uphold rural American jobs, then the only option is to deny this permit.”

“The Bristol Bay region is the crown jewel of America’s fishing. It’s an economic powerhouse,” said Chris Wood, CEO of Trout Unlimited. “All we need to do to keep it intact is to have the wisdom to leave it alone.”

Many other groups have added their voices as well.

“With a wink and an under the table handshake, Pebble is asking the U.S. Army Corps to issue a foot-in-the-door permit for a fake mine that is only a fraction of the one it intends to build,” said SalmonState executive director Tim Bristol. “And while Pebble will claim this document is a validation of its phony plan, this project is still in the ditch. The majority of Alaskans hate it, it will face broad and deep public opposition, Congressional scrutiny, legal opposition and a steadily- growing number of investors not interested in environmentally destructive and socially disruptive projects like Pebble. Pebble will cheer this document as a triumph but it is so poorly done and the process has angered so many, the pushback will be like a tidal wave. Over time, we will come to see this moment as the beginning of the end for the proposed Pebble Mine.”

“As Bristol Bay’s fishermen head out to the fishing grounds for the next six weeks, we are counting on Congress to protect the 14,500 workers directly employed by the commercial salmon fishery,” aid Andy Wink, director of the Bristol Bay Regional Seafood Development Association. “Pebble Mine is a threat to Alaskan jobs, America’s food security, and a salmon resource unparalleled anywhere on the planet.”

“It’s one of the unique things about this whole fight,” said Lindsay Layland, deputy director of the United Tribes at Bristol Bay. “You have groups typically at odds over subsistence versus sport fishing, for instance, but the one thing we can agree on is the mine moving forward is a bad idea.”

The MFCN believes that this project should not go forward. With such broad-based opposition to the Pebble Mine, we hope the EPA will use its authority to veto the project or, absent that, Congress steps in quickly to end this disastrous project before it’s too late.