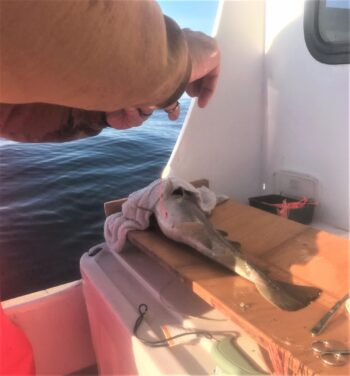 A spawning cod gets tagged on the charter fishing vessel Priority Too as part of the cod acoustic telemetry study conducted by BOEM.

This article is about state and federal governments, fishermen, science and wind farm developers working together to design a fisheries research and monitoring plan at and near the South Fork Wind Farm off Massachusetts and Rhode Island.

It points to the need for research cooperation. It gives me hope. Hope and evidence that government, fishing interests, developers and scientists can work together for the benefit of all the people of the United States of America.

Don’t get me wrong, no one stakeholder group is getting all it wants, but here in New England we have some research going on that will safeguard the fish and help move badly needed offshore renewable energy forward.

Stakeholder input like this is the very foundation of the National Environmental Policy Act (NEPA). We need to keep this law strong so science and stakeholder input always have a place in policy making in this great nation.

South Fork Wind Farm is located on Cox Ledge, which consists of rich recreational and commercial fishing grounds 19 to 24 miles southeast of Point Judith, Rhode Island. The power generated there will be sold and brought to Long Island, NY (35 miles away) via submarine cable. The 15 turbine wind farm is a 50/50 partnership between Ørsted, the global leader in offshore wind (and developer of the successful Block Island Wind Farm), and Eversource, New England’s largest energy company and premier electric transmission builder. It will be a 132 megawatt wind farm generating enough energy to power 70,000 homes. The wind farm will displace millions of tons of carbon emissions, the equivalent of taking 60,000 cars off the road.

The South Fork Wind Farm research and monitoring plan includes support of two ongoing studies and four new studies that fishermen have been advocating for through the Fisheries Advisory Board (FAB) of the Coastal Resource Management Council of Rhode Island.

Also in May, the Bureau of Ocean Energy Management (BOEM), in conjunction with the states of Massachusetts and Rhode Island, announced five studies it will be funding in offshore wind farm areas. The aim of these studies is to measure positive or negative impacts across a broader region and not necessarily in just one wind farm. Measuring the cumulative positive or negative impacts of multiple wind farms is something all are interested in.

Just north of South Fork toward the mainland in the same lease area, the Ørsted/Eversource partnership will be building the Revolution Wind Farm. This wind farm will have approximately 100 turbines and generate 743 megawatts that will be sold to Rhode Island and Connecticut. To the southeast of South Fork is the Vineyard Wind lease area where an 84 turbine wind farm is planned.

Fishermen have been working with Ørsted on a South Fork Wind Farm research monitoring plan for some time. The aim of the studies is to measure the impacts offshore wind farms could have on fish and invertebrate species before, during and after construction. The Rhode Island FAB led by Lanny Dellinger, chairman, did a good job with industry input. Commercial fishing industry facilitation of recommendations at the March 2020 meeting was done by Fred Mattera, president of the Commercial Fisheries Center of RI, who consolidated fishermen concerns and research requests on the monitoring plan.

The monitoring studies below aim to study positive or negative impacts on fish and invertebrates that are commercially important to recreational and commercial fishermen. 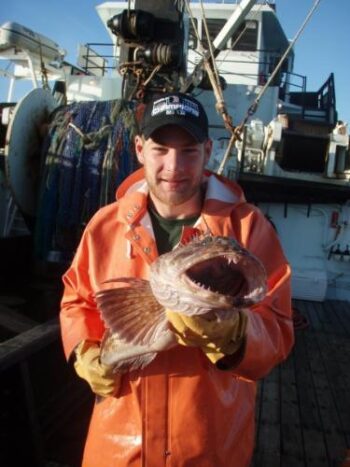 The South Fork Monitoring Plan was developed with fishermen input from the start; it is just as much their plan as it is Ørsted’s plan. Greggory DeCelles, fisheries science specialist on the strategic permitting team for Ørsted said, “The guiding principles developed at the Block Island Wind Farm have been applied to South Fork’s Monitoring Plan. We are committed to conducting sound, credible science, and biological surveys, developed in coordination with the commercial and recreational fisheries as well as state and federal agencies.” Read more about the monitoring plan.

Highlights of the monitoring plan include a gillnet survey that will target winter skates and monkfish. The study will include two control sites outside the wind farm area as well as impact location inside of the wind farm. The study is scheduled to run from October to December, and then pick up again from April through June.

A beam trawl survey to study demersal fish and invertebrates is also scheduled to get underway in August. The beam trawl is being used because it is easier to maneuver in tight spaces where a limited amount of seabed can be sampled safely and effectively. The sea bottom at Cox Ledge is not flat and smooth but rocky with varying depths.

A ventless trap survey will be conducted to collect pre-construction data on lobster and crab resources in the wind farm area. The objective of the study is to evaluate whether the construction and operation of the windfarm leads to changes in the relative abundance of lobster and Jonah crab in the project area. The project will also collect valuable information on the biology and spatial distribution of lobster and Jonah crabs.

A ventless fish pot survey will study black sea bass, scup and tautog, which are important recreational and commercial species. These species are not often represented well in trawl surveys, so the idea is to use fish pots, which are more suited for complex sea bottoms (rocky and varying depths) like Cox Ledge. The study was recommended in lieu of rod & reel surveys as they are difficult to standardize and require very large sample sizes to be effective. 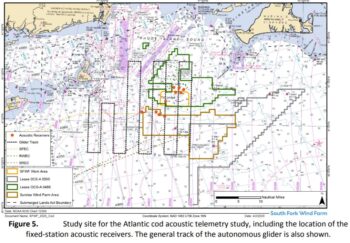 A passive acoustic telemetry will tag several species of fish with acoustic transmitters, and their movements and habitat use will be tracked using receivers on fixed buoys, as well as an autonomous glider vessel that travels the ocean surface and dives. The glider allows for fish to be detected over a wider area compared to just using fixed stations. Ørsted has pledged to coordinate with and contribute to ongoing and planned acoustic telemetry projects that are being carried out in and around the South Fork Wind Farm.

A cod fish spawning study will also use acoustic transmitters that are inserted into the fish and then monitored by fixed stations on buoys and the glider. The BOEM funded the cod acoustic telemetry study, which to date has tagged 33 of 100 desired spawning cod. The remainder will be tagged in 2020 and 2021. Capt. Rick Bellavance of Priority Charters and president of the RI Party & Charter Boat Association is one of the captains being used to catch and tag cod. Bellavance said, “There are a lot of cod being caught, particularly in the past six months which leads me to believe that twenty years of conservation is finally paying off. So I am happy that this study is being done.”

In addition, a planned pelagic study will soon be underway for bluefin tuna, blue sharks and shortfin mako sharks using the same technology. DeCelles said, “Acoustic telemetry works to collect monitoring data on species across a range of spatial and temporal scales.”

Rhode Island, Massachusetts and the BOEM announced grants worth $1.1 million for five regional studies (verses site-specific studies) that will collect data vital to the development of offshore wind and fishing. 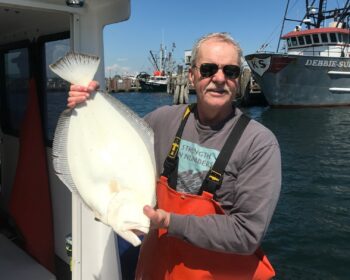 Rich Hittinger, first vice president of the RI Saltwater Anglers Association (RISAA) and recreational representative on the FAB, said, “Last year we had an outstanding bluefin tuna bite early in the season on Cox Ledge for the first time in a long time. So, you wouldn’t want to disrupt a trend like this. The recreational fishing community has been advocating for research that studies highly migratory species on Cox Ledge for this reason.”

“Rhode Island is a proud partner in this landmark effort to conduct regional scientific studies on fisheries resources prior to the start of any offshore construction activities,” said Rhode Island Department of Environmental Management Director Janet Coit. “The selected studies will help to fill data gaps and allow for informed decision-making while paving the way for meeting Rhode Island’s renewable energy goals and advancing climate mitigation efforts.”

Four other studies were awarded to measure impacts of wind farm projects in the region. They include:

So far, so good

So far offshore wind farms have had a positive impact on the abundance of finfish within their boundaries compared to control areas outside the windfarms.

In March 2019, a peer-reviewed study titled, “Meta-analysis of fish abundance at offshore wind farms,” was published in Fisheries Science & Aquaculture magazine. The study utilizes a meta-analysis of studies that have examined the abundance of finfish inside European wind farms compared to nearby reference sites development. All studies analyzed were peer reviewed and hundreds of studies were culled out of the analysis as they did not meet rigid study criteria. The study concluded that “The overall effect was positive and significantly different from zero, indicating a greater abundance of fish inside of wind farms” for both soft-bottom and complex-bottom fish species.

Another example of enhanced finfish in a wind farm is the Block Island Wind Farm. More than 50 scientists presented their research findings at the Southern New England Offshore Wind Energy Science Forum held December 2017. The Block Island Wind Farm (BIWF), the first ocean wind farm in America, has had no remarkable adverse effects on the environment, fish, mammals, birds and people. I say “no remarkable adverse effects” because there have been some subtle changes with seabed organisms. This finding still holds up today in 2020 as some of the studies have been ongoing.

Recreational fishing at the BIWF has been good, perhaps a bit better, even though fishing pressure in the area has increased 200 percent by recreational anglers as it is now a destination. At the Block Island Wind Farm there are gillnets set right up to the turbines, commercial fishermen trawl along the side of the wind farm and recreational anglers fish right up to the pylons. Just how fishing in windfarms should be.

Moving forward, Ørsted is also committed to conducting a variety of monitoring studies to understand the potential impacts of offshore wind development on marine mammals, birds and bats, and changes to the benthic habitat and community structure.

Research occurring in the South Fork Wind Farm and surrounding area is a good example of fishermen, government, science and developers working together to safeguard fishing while providing the nation with the renewable energy opportunity it needs.