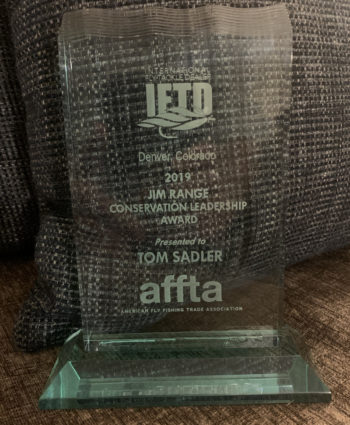 Last week, our own Tom Sadler was honored by the American Fly Fishing Trade Association by receiving the Jim Range Conservation Leadership Award, an award given in recognition of exemplary efforts demonstrating a commitment to AFFTA’s policy protocol: Access to healthy habitat creates recreational opportunity that leads to economic activity. Tom was given this award in Denver, CO at the International Fly Tackle Dealer Show, the largest international gathering of fly fishing manufacturers, retailers, sales reps, media and fly fishing organizations in the world.

For his nomination, AFFTA pointed to Tom’s “extensive history of promoting fisheries conservation through advocacy and communication,” as well as his expertise in coalition building and grass roots organizing, including the creation of the American Wildlife Conservation Partners, FishNet, and the Theodore Roosevelt Conservation Partnership.

AFFTA acknowledged Tom’s contributions as the organization’s board member for nine years and his role as chairman of the Government Affairs and Alliance committee. “His nearly 40 years working in our nation’s capital provides the AFFTA leadership with the kind of insight and engagement that exemplifies the accomplishments of the late Jim Range.” Range was a celebrated conservationist who served as chief counsel to Senator Howard Baker in the early 80s and was instrumental in passing landmark legislation such as the Clean Water Act.

AFFTA President Ben Bulis said, “Tom has been an advocate for the protection and enhancement of fish and wildlife habitat for decades. Jim Range once said, ‘The ultimate test of a man’s conscience may be his willingness to sacrifice something today for future generations whose words of thanks will not be heard,’ and that is exactly what Tom does each and everyday. Jim would be proud and honored to know that Tom received this award named after him.” 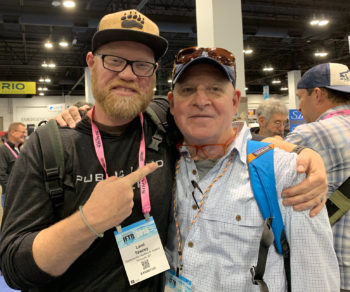 Tom has contributed his knowledge and expertise on the staff or as a volunteer with numerous conservation organizations throughout his long career, including the Trust for Public Land, Trout Unlimited, and the Izaak Walton League. He honed his communication credentials as the executive director of the Outdoor Writers Association of America. Now, all of us here at the Marine Fish Conservation Network are benefitting from his guidance and keen political instincts.

Tom has developed strong and trusting relationships with our members and our team that has enabled us to better work together to achieve our goals. His outreach to the many different stakeholders within our coastal communities has broadened our coalition and added to our diversity and uniqueness, increasing the effectiveness of our organization.

Having previously spent much of my career working on the conservation of fish and wildlife habitat and public lands, I understand what an honor it is to receive the Jim Range Conservation Leadership Award, and I’m thrilled he has been recognized for his work. We at the Network are proud of Tom and feel lucky to have him on our team to continue Range’s legacy. Our warmest congratulations to Tom – well done, and well deserved!