Top photo: Captains DeFusco and Sprengle of East Coast Charters with a wahoo they caught in warm August water off Rhode Island. Read the first installment of this two-part series.

What climate change impacts are fishermen experiencing and what scientists are doing to help fisheries managers and fishermen prepare is the focus of this article. But as you likely know, the water continues to warm exponentially.

What’s happening on the water and what scientists are saying? 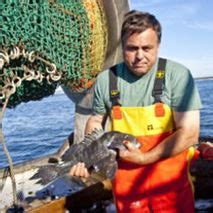 Chris Brown is a commercial fisherman and president of the Seafood Harvesters of America (and the Commercial Fisheries Center in RI). Black sea bass are abundant in the Northeast due to warming water.

Coastal dwellers and fishermen are feeling the impacts of rising water, warming water and fish movement. In the Northeast, cold-water fish have moved north and east out to deeper, cooler water. Species such as American lobster and winter flounder are no longer commonly found in Southern New England in abundance. And warm water fish such as black sea bass, scup and summer flounder are more abundant than ever before.

Warm water is impacting the charter fishing industry. I, for one, am thankful to the black sea bass; they are in Rhode Island waters in abundance and have saved many a charter for me. We even have a charter captain or two running wahoo trips out of Rhode Island, and my colleagues in Maryland are now running tarpon trips (that’s 50 to 100 pound tarpon). Changes like this are shuffling the fish species deck up and down the East Coast.

In 2016, a definitive study on climate change impacts on 82 fish and invertebrate species in the Northeast was published by Dr. Jonathan Hare, now science and research director of NOAA’s Northeast Fisheries Science Center. The study used quantitative approaches that were developed to examine climate impacts on productivity, abundance, and distribution of various marine fish and invertebrate species. The study identified what species would be winners and which ones would be losers in the Northeast as the water continues to warm.

Jason McNamee, Ph.D., chief of marine resources for the state of Rhode Island said, “We use Dr. Hare’s study to strategically think about changing fish in our area and to plan on how to mitigate some of the impact of climate change on fish and fishermen.”

Dr. McNamee said, “Dramatic changes have occurred with iconic species such as the American lobster and winter flounder. They are gone for the most part and not coming into Narraganset Bay any more. Yet we have some winners too. In Rhode Island we have a greater abundance of squid, scup, and black sea bass, which provide new opportunities for both recreational and commercial fishing.” 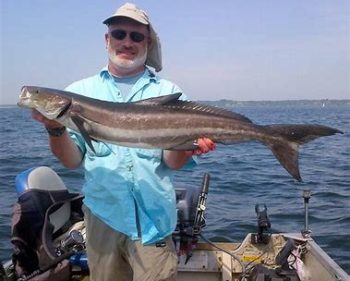 Loss of habitat and changing habitat is occurring too, which has impacted the state’s efforts. “For example the state invested a lot of resources, a lot of effort to clean Narragansett Bay and improve water quality. We should be benefiting from the progress we made in reducing nutrients. We should have an abundance of winter flounder for example; however, temperatures rising have thrown us off course.”

A warm water exotic species that the state is planning for is cobia. Anglers are catching them at an increasing rate, so much so that McNamee said, “We are starting to explore getting a fishing regulation on the books for cobia, so we can plan for them in a sustainable way as anglers catch more and more of them.”

Another example of warming water impacting regional fishing is groundfish, such as yellow tail and winter flounder, which are being replaced with squid. McNamee said, “Some fishermen and boat owners moved from groundfish to fishing for squid, as they were and are abundant in our area. If fishermen think too linear we will not be able to make changes like this as climate change and warming water accelerates and fish abundance changes. We (as fishermen and fishery managers) need to be flexible enough to take advantage of changes.”

Rich Hittinger, 1st vice president of the Rhode Island Saltwater Anglers Association, said, “Many of the changes in fish that we see in local waters are likely due in some part to rising water temperatures. When I started fishing regularly in the 1970s, we caught pollack at Block Island, cod all around the island, winter flounder in all of the bays; but most of these fish are gone now. On the other hand we didn’t see many black sea bass and not nearly as many fluke as we have now. I think climate change has a lot to do with all of this.” 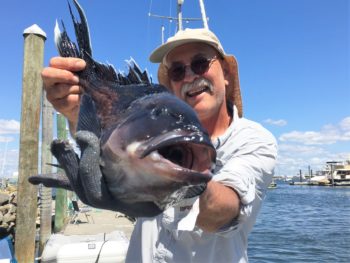 Black sea bass running strong and large like this one caught by Kevin Fetzer this summer on a ledge in 65 feet of water, three miles south of the Sakonnet River off Rhode Island.

Capt. Rick Bellavance, New England Fishery Management Council member and president of the RI Party & Charter Boat Association, said, “I have seen what appears to be a shift of species into our area. Species like black sea bass have become a significant part of my business. Others, like bluefin tuna seem to be moving North and East… away from us. And, “The larger striped bass are spending more time in deeper water, further offshore than in the past, yet the small fish seem to thrive in the warmer water and are very active in shallow water. I think many of the rare catches we hear about have occurred in the past, but it is probably safe to assume that we will hear more of catches like Spanish mackerel, cobia, snappers and groupers if the water temps rise to levels that they like.”

Fred Mattera is the executive director of the Commercial Fishery Center of Rhode Island (CFCRI) that represents eight commercial fishing related associations. Mattera said, “Climate change is very real. Our fishermen are experiencing increasing competition off Rhode Island from Virginia and North Carolina boats who have summer flounder quota but no fish in their area. We have the fish here but no adequate quota allocation. These allocation challenges are only going to increase as climate change accelerates and more stock shifts occur. We need an equitable way to address stock shifts and allocations.”

The stock shift example all are pointing to is black sea bass. Mattera said, “We did not catch many of them in the 90’s but today they are prolific. Our fishermen are catching them everywhere. Yet, we do not have the allocation and are throwing tons of them back as by-catch. We need to build climate change impacts like this into allocation models as soon as possible because changes are accelerating.”

The CFCRI is partnering with the state of RI on a black sea bass study to determine just how many sea bass are in the northern regions. Mattera said, “Having the science to back up our claims is the first step; then we need to build study findings into allocation models.”

“Fishermen know to fish for what is in the water; we just need to help them adapt with new fishing methods and gear as they target new abundant species in their area,” said Mattera.

We need to step on the accelerator and engage fully on climate change and its impact on fish and fishing communities. This means when it comes to the difficult issue of reallocation between regions, our federal fishing law needs to be strong, as regions will resist giving up quota even though the fish are no longer in their area. If at all possible, we need to do no harm; however, we also need to move the country forward for the common good as the fish belong to all the people of the United States of America. Fishing law needs to allow for science-based data as well as historical data when addressing allocation.

The Magnuson-Stevens Act (MSA), the fishing law of our nation, is over 40 years old and has been updated several times. It is a good law, which has allowed more than 45 fish stocks to be rebuilt since 2000. However, when it is updated it needs to accelerate ecosystem-based management approaches, provide enough teeth to address warming water, fish movement and allocation as well as ocean acidification and sea level rise.

Rep. Jared Huffman (D-CA) has announced a bipartisan effort to garner input for a reauthorization of the MSA next spring. Huffman is the Chair of the Water, Oceans, and Wildlife Subcommittee on the House Natural Resources Committee and is holding a series of roundtable discussions throughout the United States. The first two occurred in California in early October. He plans to engage diverse perspectives, interests, and needs of individuals who have a stake in management of our ocean and fisheries resources.

Huffman hopes to restore the historically bipartisan character of marine fisheries policies including prior successful Magnuson-Stevens reauthorizations. The goal for his listening tour is to assess whether improvements to the Magnuson-Stevens Act are needed and if so, what they should be. Topics covered in his roundtable discussions will include climate change impacts on fisheries and whether managers have the tools and resources they need to ensure resilient fish populations and stability to fishing communities.

If reauthorization moves forward, the fishing community needs to make sure climate change and all of its ramifications are addressed in the new law. Our policies must evolve with the emerging threats in our future; only then can we fully protect and conserve our marine resources for us to enjoy for generations to come.