Top photo: Solomon Moore (age four) of Brunswick, Maine with a scup he caught last year. Scup, a warm water fish, are now so plentiful in the region that they provide a great fishing opportunity for youth. 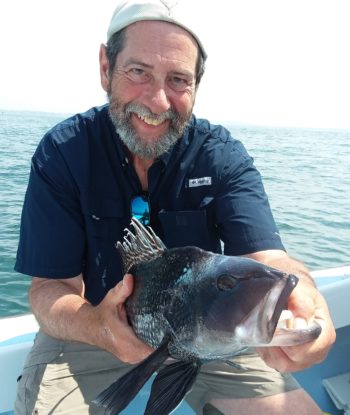 Capt. Dave Monti with black sea bass. Warm water fish are moving into the region, and cold water fish like winter flounder, cod and American lobster are moving out to cooler/deeper water.

Much of the heat generated by global warming, heat that would normally raise our air temperatures around the world, is absorbed into our oceans. How much heat has been absorbed? The answer is a lot.

Last year our oceans absorbed 93 percent of the heat our carbon emissions trapped in the atmosphere. The ocean would never release all this retained heat at once, but if the heat stored in the world oceans since 1955 was instantly transferred, NOAA relates the atmosphere would warm by 65 degrees F.

Long-term trends of ocean heating create the expansion of water and a rise in sea level that exposes our coastal freshwater supplies to saltwater intrusion, makes our coastal communities susceptible to storm surges, and threatens coastal infrastructure. The current sea level and its associated pattern is expected to continue and accelerate in the near future.

The increase in ocean heat also aﬀects the planet’s weather systems, by raising air temperatures and supplying more moisture. Warmer air can hold more moisture. In turn, this leads to increases in the intensity of storms and heavy rains. In 2018, the world experienced a number of major tropical storms, typhoons and hurricanes, such as hurricanes Florence and Michael in the Atlantic and typhoons Jebi, Maria, Manghut and Trami in the Pacific.

Other consequences of ocean warming that are referenced in the ocean warming study include declining ocean oxygen, bleaching and death of corals, melting sea ice through bottom warming, and the increase in marine heat waves. In addition to ocean-related eﬀects, there are other indirect eﬀects of ocean heating, such as increased drought intensity, heatwaves, and risk of wildﬁre.

Lucy Churchill with a 24” summer flounder (fluke) she caught off Rhode Island this summer. Fluke stock is in a slump coastwise, however, scientists say the biomass has moved north.

A good example of how warming water is impacting estuaries and the fish is Narragansett Bay, Rhode Island. It is small enough to study, yet it is very diverse. I fish this bay regularly as a charter captain and fishing guide.

Tom Kutcher, Bay and Estuary Report program speaker with the Rhode Island Natural History Survey (and a former Baykeeper for Save the Bay) said, “The salt marshes are disappearing. You might say they are drowning with climate change sea level rise.”

“These salt marshes act as filters for the Bay. Water flows into them from the rivers and then into the Bay. Without them we have no filters,” said Kutcher.

From the 1800s to 1970 we lost over 50 percent of Narragansett Bay salt marshes due to development and other factors. A recent analysis found we have about 3,321 acres of salt marsh left in the bay and about one-third of it in the Warren, Palmer and Barrington Rivers. Recent observations and future projections suggest that a large percentage of existing marshes will be lost with accelerating sea level rise affecting the fish and wildlife of Narragansett Bay. 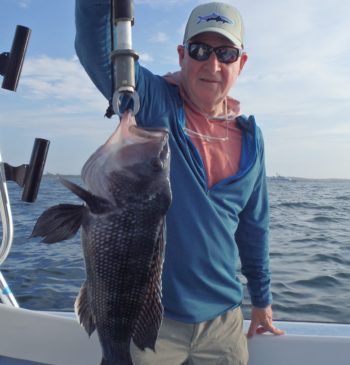 Tom Sadler, deputy director of the Marine Fish Conservation Network, with a 20” black sea bass he caught off Newport, RI. Black sea bass are plentiful in the northeast in part due to climate change.

A variety of factors, such as fishing pressure, weather patterns, water quality, pollution, loss of habitat, and disease, can cause changes in the abundance and mix of fish species living in estuaries.

Fishermen have known for a while that the composition of fish in Narragansett Bay has changed. You might say there will be some fish species that win by thriving in a new warmer bay and others that may lose, meaning they will leave Narragansett Bay for a more comfortable environment.

Warming of coastal waters and the bay has been documented here over the last 60 years and is projected to continue into the future. The Bay and Watershed Report said, “Since the 1980s, warmer-water species such as scup and black sea bass have displaced the resident species such as winter flounder and red hake, partly due to increasing temperatures. The survival rate of American lobster may also be reduced. As time goes by, the fish community in Narragansett Bay is expected to increasingly resemble that of a more southerly, mid-Atlantic estuary with associated shifts in species.”

If fish populations are changing due to climate change and warming water, then our fishing laws, most importantly the Magnuson-Stevens Act (MSA), need to be updated to reflect these changes too. Our fishing regulations are based on historical fishing and survey data (what fish were caught and where) and what was true in the past may not necessarily be true today or tomorrow due to warming water and fish movement.

In Rhode Island, more cobia (an exotic warm water fish) have been caught than ever before, and as noted above, enhanced populations of summer flounder, scup and black sea bass have moved into southern New England. We also have seen a decline in cold-water fish like cod, winter flounder and American lobster.

Dr. Malin Pinsky of Rutgers University is a pioneer in using historical fishing trawl survey data collected by NOAA for years and looking at it differently. The data includes the fish caught in the trawl as well as latitudes, longitudes and the depths of each trawl. Once the historical fishing survey data base was built Dr. Pinsky and his team were able to pinpoint where fish populations were found—and if those locations changed over time. His work has been developed into an interactive application that can be found at http://oceanadapt.rutgers.edu/; it clearly shows movement of a variety of species in our region.

How can fishing laws be enhanced to reflect climate change?

Regional councils have begun to work on ecosystem-based management plans that would take into account the impact of climate change, warming water and fish movement. However, plans have not developed fast enough and the planning and approach between councils is not consistent. Couple this with our federal administration not supporting evidence/science-based climate changes findings nor dedicating resources to address these findings, and all of it puts the people of this nation and fish at risk.

And, when it comes to the difficult issue of reallocation of quota between regions due to climate change and fish movement, our federal fishing law needs to be strong, as regions will often resist giving up quota they may have even though the fish are no longer in their area.

The Magnuson-Stevens Act is over 40 years old and has been updated several times. It is a good law, which has allowed many stocks to rebuild. However, when it is updated it needs to accelerate ecosystem-based management approaches reflecting climate change, warming water, fish movement and quota allocation.