Photo: The Network’s booth at the Seattle Expo

“Fishing Gear Here Now”—could have been the tagline for the recent annual Pacific Marine Expo in Seattle, WA, with diesel engines as one of the many shining stars of the show. But what’s an engine without a boat? A boat without a fisherman? And fishermen there were, in the hundreds if not thousands, at the expo, one of the biggest gatherings of commercial fishermen on the West Coast. 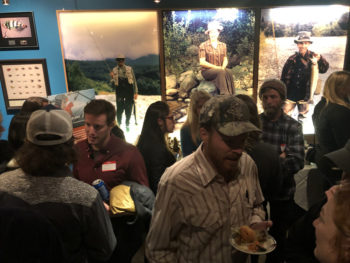 The expo brings the maritime community together in a celebration unique to this event. For the most part, fishing seasons are over and stories are shared throughout the fleet. The processors host marvelous gatherings for their fishermen, catching a cast of characters that captures the diversity of the industry. Vendors show off the latest and the greatest of everything marine related – electronics, fishing gear, fancy wheelhouse chairs, raingear, totes, conveyor belts – it’s a show floor of dreams for fishermen and processors alike. The educational forums provide an opportunity to hear about a variety of issues, from the latest science on ocean acidification to poetry. The expo is about networking, and in the midst of all of the buzz about gear, conversations occur about the value of science-based fishery policy, for can there be fishermen, boats and engines without fish? And we have abundant fish in our American waters because fishery managers are guided by effective policies mandated by the Magnuson-Stevens Fishery Conservation and Management Act (MSA).

It’s a fundamental, simple and circular formula: science-based policies that are committed to conserving fish sustain harvestable fish stocks. These abundant fish attract fishermen, who buy boats, gear and help maintain coastal communities. And then fishermen affirm and, if needed, improve the very policies that keep the whole show going.

The Marine Fish Conservation Network (Network) works to help fishermen do just this. We network with small-scale fishing families, anglers, conservationists, scientists, chefs, fishmongers and consumers around the nation to strengthen our voices in the policy arena, to ensure this formula of abundance is followed. Together we work to make a difference, from those that study fish and the marine environment, to those that eat fish or choose not to, to the fishermen who have spent decades on the water looking toward the end of their fishing careers, to the young and ambitious who are working their way in. We aim to strengthen the conservation and management objectives in MSA and leave the oceans as a healthy environment for the next generation. 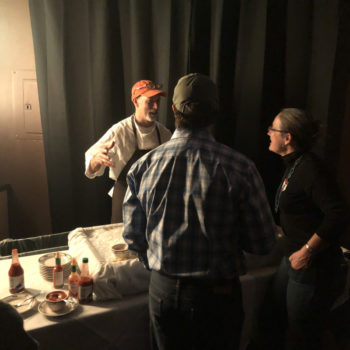 “AMCC has participated in the expo for years. As a marine conservation group with hundreds of fishermen members, we enjoy the opportunity to network and talk fish. With the Magnuson-Stevens Act (MSA) up for reauthorization, conversations tend to gravitate toward policy. We found that we share common goals for small-scale fisheries and fishing families. We support sustainable coastal communities and science-based annual catch limits. MSA has led to a profitable, sustainable, and stable Alaska commercial fishing industry. We like that. As we talk we commit to work together to support a strong MSA so that future generations of Alaskans are able to enjoy the same bounty. As we network we recognize our vision aligns with commercial fishermen throughout the nation – we all seek sustainable fishing communities and commit to work together.”

While in the daytime the expo convened in the Alaska Hall, one evening our team moved the networking to a Bountiful Oceans Happy Hour Reception at the Steelhead Diner located in Seattle’s heralded Pike Place Market. Steelhead Diner Owner Kevin Davis not only welcomed us but also shucked oysters for us. Taylor Shellfish Farms provided the oysters, and clams, too. Steelhead Diner Chef Anthony worked his wonders with more of the ocean’s bounty on show, including albacore tuna from Tre-Fin and Bristol Bay Fair Trade sockeye salmon from Wildfish Marketing. Portland’s Hopworks Brewery provided Long Root Ale, a beer collaboration with Patagonia, while Walla Walla’s Amavi Cellars sent over Salmon-Safe certified wine. 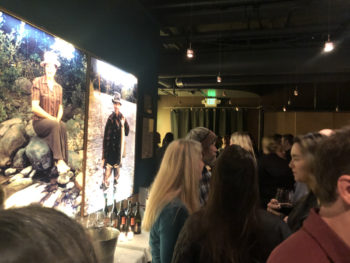 “Since Patagonia’s inception, Founder Yvon Chouinard has continued to take on an incredible role as a social change organizer, educator, industry shifter, and conservationist. Patagonia’s generous donation, which enabled this event to happen, shows its ongoing support of sustainable industry. Through its public engagement, Patagonia encourages a better world through mindful choices and putting money behind good causes. My sincerest gratitude goes to this wonderful company for its support.”

At the next and final day of the expo and the Alaska Hall for more networking, AMCC’s Theresa Peterson’s observed:

“The environment is changing for both our oceans and our industry’s young fishermen. This reality was reflected throughout the expo, where events, forums, and presentations focused on issues facing young and new entrants, from loans to boat building to the Young Fishermen’s Development Act to deckhand apprenticeships. Commercial fishing has not lost its importance to the next generation. In fact, a meaningful connection to nature and our food has never been more vital, and conversely, never more difficult to maintain, though the young, engaged fishermen at the expo were eager to take on the challenge.”

About Network Voices of the West Coast

View all posts by Network Voices of the West Coast →