Surfers, divers, fishers… This is our legacy. So speak the hell up!

My name is John McMurray, and I’m an ocean-junkie.

I make a living from the sea. And saltwater courses though my veins. 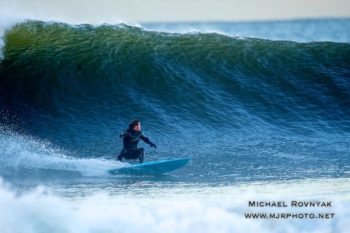 Almost every day, I get my fix – when the alarm-clock starts screaming at 3am; when I start the engine up; when I cruise by a marsh-line full of shore birds; when a schoolie striper swirls on a fly or a 200lb tuna crushes a surface bait; when a whale lunge-feeds on a school of menhaden – all of it, it’s awesome, and those that have been on the boat with me know that it is often that I can’t contain myself. I never tire of it, and my appreciation runs very deep.

I live a charter captain’s life, where an 8-hour day is cake, and a 16-hour day is the standard (at least during tuna season). Where no day is ever the same, and exceptional things happen all of the time.

I sure as hell don’t do it for the money, because in the end, given the hours worked, it ain’t much. And I don’t do it because I got let go from my crappy office job a few years ago, which was in the end a stroke of good fortune. I do it because it allows me to be on the water, pretty much all the time, to get that fix. I’m not ever going back, and I will do this until my body won’t let me.

Yet, I am also a “surfer,” although I prefer not to be thought of as the Jeff Spicoli type. I go whenever, wherever I can, because surfing allows me to “soak” it all in – immerse in it, be part of its movements, currents and swells, and get my fix. There is something extraordinary about paddling out on a good day. Dropping in, getting pushed by violently moving water, getting covered up and spit out. It’s hard to describe, but that endorphin-laced feeling after a good surf, sometimes it lasts for days.

Hours before I sat down to write this I was in it – swells had rolled in from a great distance, met a sandbar and formed perfect 6’ right and left-hand walls held up by cranking offshore wind. It was sublime.

While I am not a diver and my snorkeling experiences are limited, I am told that the “fix” from that is similar. Like a good day of fishing or surfing, divers feel good, fulfilled, and “stoked.”

It is in those moments, those hours, those days of stoke whether it’s from sticking a grand fish, seeing a whale breach, pulling into a barreling wave, or just seeing something awesome while snorkeling or diving, that ocean users connect. I’m not a religious guy, at least not in the conventional sense, but it’s hard not to think in those moments we are, ahem, “blessed.”

What’s the point of all the waxing?

It’s that there is a powerful intrinsic value to all of it – to good fishing, to a good surf, to good diving, to clean water, to healthy ocean ecosystems, to abundant marine resources. Maybe that’s not clear to profit-focused extractive industries, to bureaucrats, or to career public resource managers, but it’s certainly clear to the legions of fishers, surfers and divers, those of us who want/need that fix. And it’s also clear to the great majority of the public who take pleasure just knowing these things exist.

Yet, in the management and decision-making realm, acknowledgement of that intrinsic value is almost nonexistent. And in the cases where it is acknowledged, it rarely appears to be a significant factor in the decision-making process.

Management documents and management discussions almost always focus on the economic impact of extracting natural resources. Even though one could argue that there is a significant wide-raging positive economic impact in having healthy ecosystems and abundant marine resources, it is difficult to quantify. And when extractive industries can easily quantify things like income, jobs, etc., well, they gain traction.

Managers certainly can’t quantify “stoke,” because the intrinsic value of healthy and abundant ocean resources simply can’t be broken down into dollars-per-pound. And so, it’s often minimized, or outright disregarded.

While managers don’t have to quantify everything, and certainly have the leeway to use “common sense” and take into account such intrinsic value, they pretty much don’t, at least not these days. Because if they do, industries will simply sue, claiming that such decisions are not science-based, or worse, appeal to the Secretary of Commerce, who will almost undoubtedly reverse a decision that a fishery management body makes that is based on common sense, instead of on dollars. And with the administration we have in office now, they will, and have, sided with industry every darn time.

Having sat around management tables for the last decade, I can tell ya first hand, it’s pretty “gosh darn” frustrating.

In the end though, I’d like to think we have a system in place that’s ruled by the people, and not corporations. And we have a pretty good law in place, at least on the federal level – the Magnuson-Stevens Fishery Conservation and Management Act – that ensures a few fish are left in the water and habitat is protected. While we may lose some conservation battles because intrinsic value is so difficult to quantify, because that law exists, sometimes we can hold the line, and win a few too.

I’ve used a good amount of space here and elsewhere trying to educate and alert anglers, but it’s equally important that surfers and divers are aware that Magnuson-Stevens is in great danger, which puts their passion and lifestyle in danger, too.

HR 200, which recently passed a House vote, threatens every conservation provision of the current law. In the Senate there is a slightly more benign bill, S.1520, which, if it were to pass, would have to be reconciled with the House version. I can assure you, no good will come of that. If the Senate bill were to pass, it’s hard to believe we’d ever be able to hold the line.

What gives me great hope is there are a crap-ton of people who care. Pretty much everyone I come into contact with – Republicans, Democrats, conservatives or liberals – if they are ocean resources users (surfers, fishers, divers etc.), they understand the innate value of ocean resources, and appear to be quite passionate about protecting them. They get why ocean resources shouldn’t simply be viewed as dollar signs.

And yet, at critical junctures, sometimes the silence is deafening.

That’s gotta change. That HAS to change.

So while I’ve poked at the fishing community for years, this certainly isn’t just about fishing. It’s about the divers, the surfers, and all of us ocean-junkies. Everyone needs to act.

McMurray literally means “seafarer,” or “of the sea.” I’m pretty darn proud of that name, particularly since it seems to have manifested itself in my 9-year-old son, who appears to be developing into an ocean-junkie too (which is far better than a video game junky). But every fisherman, surfer, diver – all of us – we are “of the sea,” and we are incredibly lucky people.

Make no mistake about it, our lifestyle, our passion and our legacy is under attack. And we have an interest, an obligation to protect its vast resources, with every ounce of energy that we have, not simply for us, but for our children.

You can start, right here, right now, by clicking this link and expressing your opposition to S. 1520.

Please, do it now.