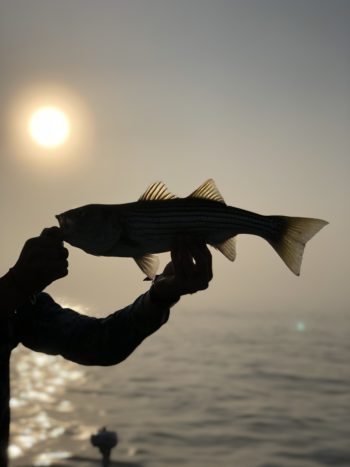 Striped bass unite us on the East Coast. For thousands of years these hearty fish have made their impressive migration from the Mid-Atlantic Bight to Southern New England and north to the Gulf of Maine. Stripers have a curiously strong magnetic pull. They draw hoards of anglers to the coast. They drive us to spend millions of dollars on gear, boats, electronics, fuel, food at restaurants, grocery stores, hotels, second homes, etc. According to NOAA’s research and other studies, the Massachusetts’ recreational striped bass fishery has historically boasted an annual economic impact of $1 billion. There’s no doubt that we go to great lengths and spend significant dollars to pursue this captivating fish.

It’s safe to say that we love seeing stripers charging after top water plugs, inhaling live mackerel, and eating flies on sandy, coastal flats. We have clearly demonstrated that we also place a high value on consuming striped bass, which are a delicious white meat with great texture. Each outing, anglers are face with the choice to catch and release or catch and keep. There is room for both, of course, but there is an art to managing this species that we haven’t quite figured out yet. When choosing between the two practices, we all need to be armed with the appropriate information.

Big striped bass have a couple of interesting qualities. As they grow larger, a crucial organ of the female striper grows disproportionately large and more productive, the ovaries. In the science world, these big highly productive females are called BOFFFs, an acronym for big old fat fecund females. Not only do these large female stripers produce infinitely more eggs than younger females, the eggs are also larger in size and richer in fat, giving offspring of these females a leg up and the potential to be more resilient as they begin their life cycle. Every 2.2 pounds that a breeder female striper packs on will enable that fish to produce an additional 200,000 eggs, as reported by a study conducted in 2000. It’s clear that big females are vital to our striped bass population, and they get more valuable as they grow larger. These fish are the wise old sages of the striper population. They are true royalty, exponentially more effective at reproduction, and vital to the future of our striped bass fishery. Large female stripers are hands down the most important members of the population; they control the destiny of the population. 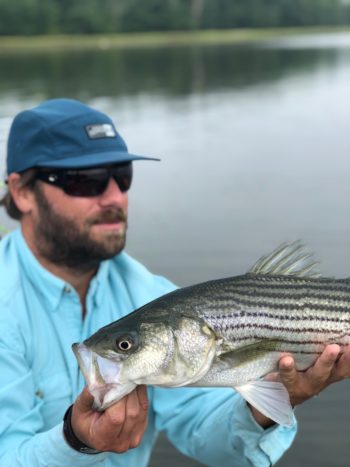 Our coastal fish already face significant challenges with habitat destruction, water quality, and the over harvesting of forage fish so the least we can do is protect the most vital segments of the striper spawning population. Recreational and commercial striped bass anglers are harvesting these big, highly productive females at rates much higher than the population can replace. It’s simple; we are putting far to much pressure on the most important segment of the striped bass population.

We must change our behavior if we want continue enjoying strong economic impacts and even higher emotional returns from the existence of a strong striped bass recreational fishery. NOAA data reports that because of the decline in the recreational striped bass fishery, Massachusetts has lost more than $300 million to $400 million in annual economic activity and a loss of hundreds of jobs each year since 2003.

Let’s add another element to the equation. As stripers forage and grow larger, their meat and fat accumulate certain elements and toxins, specifically mercury and polychlorinated biphenyl (PCBs). Mercury is the most toxic, non-radioactive element in the world, and it permeates our environment as a byproduct of our industrial society. The burning of coal releases mercury into the atmosphere, which then falls to the earth’s surface. Mercury enters our streams, rivers, lakes and oceans where the element is absorbed by bacteria and converted to methyl-mercury, an organic form that is easily absorbed by plankton and zooplankton at the bottom level of the aquatic food chain. PCBs are the other major concerning contaminant that is persistently present in our marine environments. PCBs haven’t been produced in the US since 1979, but these stable contaminants linger and continue to enter the environment through spills and leaks from widespread improper electrical equipment storage and disposal. Both PCBs and methyl-mercury are incredibly dangerous for humans to consume, causing potentially severe damage to the brain and nervous system, kidneys, skin and liver. These toxins are even more dangerous to our children, pregnant women, and women planning to start a family.

One of the most concentrated forms of exposure that humans have to methyl-mercury and PCBs come from ingesting fish, but it’s important to remember that not all filets are created equal. Striped bass have potential exposure to methyl-mercury and PCBs everyday as they forage. Small striped bass show low levels of mercury and PCBs, but as they grow larger these toxins bioaccumulate and magnify to levels that are potentially very dangerous. These toxins are of such concern to striped bass anglers that every state on the east coast where striped bass are caught, except for Massachusetts, puts out consumption advisories. Here are a couple examples:

These advisories are a helpful guide, but there is a lot of ambiguity in these consumption recommendations. For instance, a 28” striped bass will have much less methyl-mercury and PCBs than a 40-pound fish that has been accumulating these toxins for years. Consuming different parts of the striped bass also has varying densities of these toxins. PCBs concentrate in the skin and fat of the fish. If your taste buds gravitate to that part of the fish, you may be exposed to higher levels of toxins. We have also been underestimating the age of striped bass up until just recently. Dr. Dave Secor from the University of Maryland Center for Environmental Science published a study in 2000, and his findings can be summarized by the following quote:

“The longevity of Chesapeake Bay striped bass found in our study surpassed that reported in the literature. Investigators have long suspected that large striped bass (e.g. >30 kg) were quite old but were not confident in using scale annuli for age determination. Merriman (1941) reported difficulty in assigning ages after 8 years using scales yet estimated that a 40-kg striped bass captured in Massachusetts coastal waters was 29–31 yr old. The two females I observed to be 31 yr old were 20–24 kg in weight. Because a systematic error occurred with scale ageing (Secor et al., 1995), Merriman’s fish could have been much older than he reported.”

Dr. Secor’s research has demonstrated that mature striped bass are older than we thought they were, much older. This also means that we have likely underestimated the amount of toxins that have accumulated in striped bass, making them potentially even more dangerous to consume.

This all rolls up to one question, why do recreational anglers place such an importance on harvesting big old fat fecund female stripers? These large fish have the highest probability to be loaded with dangerous levels of methyl-mercury and PCBs. These fish also happen to be the most important segment of the population for future spawning stock biomass (SSB) recruitment. If we want to keep our families and children healthy while ensuring a long lasting recreational striped bass fishery for years to come, we MUST make a cultural shift. Let’s keep big stripers swimming, right where they belong. Let’s protect our families from methyl-mercury poisoning and exposure to PCBs, simply by choosing to harvest much smaller, legal striped bass. Let’s treat our BOFFF stripers like the true royalty they are, releasing them with care, so they can continue to populate this perfect game fish that we enjoy pursuing so much.

Kyle Schaefer is a fly-fishing guide in southern Maine by summer, bonefish lodge manager by winter and conservationist every day of the year.
View all posts by Kyle Schaefer →