Photo: Sperm whale with calf, by Gabriel Barathieu via Wikipedia

Typically, a fisherman just needs to worry about catching fish; they are the top predator. That’s not the case for longline fishermen in the Gulf of Alaska, however. Hungry sperm whales have learned over time how to remove the highly prized sablefish (which fetches an average ex-vessel price of $4.50/lb) from longline gear. The depredation of whales has inspired a unique collaboration of fishermen, scientists, and fishery managers to figure out ways to keep whales and the longline gear apart.

The interaction between whales and commercial fishermen has not always been a concern. Years ago, sperm whales were relatively rare in the Gulf of Alaska, with populations still recovering from a century of industrial whaling. And even when whales started hanging around fishing boats off Southeast Alaska, at first they mostly ate the fish guts and heads that were thrown back into the ocean as the fish were cleaned. But over time, sperm whales got smarter and figured out how to pluck sablefish off longline hooks. As these interactions increased, catching fish got a lot harder for fishermen and the risk of injury to both fishermen and whales went up. To tackle these growing concerns, in 2003 commercial fishermen, biologists and fishery managers launched the Southeast Alaska Sperm Whale Avoidance Project (SEASWAP). 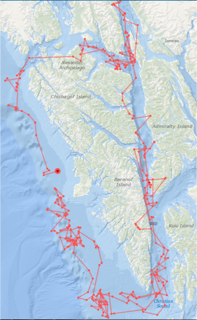 As a founding member of SEASWAP, the Alaska Longline Fishermen’s Association (ALFA) and its members have worked closely with researchers to understand whale behavior near fishing boats and test whale deterrents. Through this research, 130 individual sperm whales have been identified; of those 130, 12-15 whales are classified as “serial depredators”—with the worst offender nicknamed Jack the Ripper. SEASWAP’s research found that whales had learned that the sound of a boat shifting in and out of gear means dinner is served, since longliners shift their engines in and out of gear as they haul their lines.

After testing a number of deterrents that helped but did not stop depredation, SEASWAP launched a sperm whale avoidance network, which allows fishermen to track whale location in real time and use this information to avoid whales. This year, ALFA was awarded a NOAA Bycatch Reduction Engineering Program grant to automate sperm whale location data sharing between SEASWAP boats, creating a network of fishermen working together to avoid sperm whales. This collaborative approach to addressing resource and management issues is at the core of ALFA’s work.

“Our fishermen actively engage in research and data sharing to safeguard their future and the future health of the marine ecosystem,” said Linda Behnken, Executive Director of ALFA. “I hope this model works for fishermen in other places who are struggling with similar issues. We have found that when you combine the problem-solving ability of fishermen with the rigors of science, great things happen!”

For more information about SEASWAP and its research findings visit: http://seaswap.info

Video: a whale steals a fish

Elizabeth Herendeen is based out of Southeast Alaska, where she works with nonprofits such as the Alaska Longline Fishermen’s Association and SalmonState to help protect and promote Alaska’s wild fisheries and fishing communities.
View all posts by Elizabeth Herendeen →