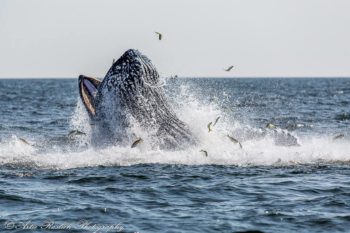 Recently in the NJ/NY Bight off of Sandy Hook, NJ, we had some visitors that we had not seen in a very long time. Omega Protein, the Atlantic menhaden (bunker fish) processing giant, decided to take advantage of the calm seas and steam 250 miles north from Reedville, VA up to our waters. I am sure that pictures and videos on social media showing the presence of whales caught Omega’s attention, and they decided to send some spotter planes up for a look. They were able to determine from above that there were millions of older, oil-rich bunker in giant schools.

For the past couple of months, this area has been the home to 13 juvenile humpback whales and countless pods of bottlenose dolphins. Last week local organization Gotham Whale was onboard party boat American Princess out of Jamaica Bay, NY enjoying a whale-watching trip. As the whales and dolphins were lunge feeding on the abundant adult menhaden, those onboard the boat watched in awe as Omega vessels pulled up nearby and proceeded to wrap nets around millions of pounds of bunker and suck them up with vacuum hoses. Luckily, the nets did not entangle any of the whales, and no one reported an incidence of bycatch of any kind. 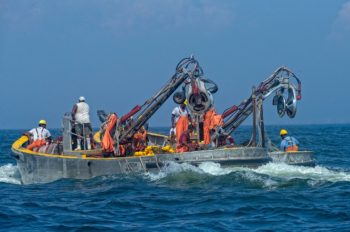 Over a four-day span, four massive vessels – each capable of holding over a million bunker, and some closer to two million – continued to fish: The Rappahannock (194 ft), The Calcasieu Pass (154 ft), The John Dempster (166 ft), and The Fleeton (184 ft).

This is all legal by the way, and they are in fact, operating in the EEZ (past the required three-mile line) and within the harvest limit that has not been met for 2018 as of yet.

This event sparked an outpouring of renewed interest in menhaden, and now local folks want to stop the harvest completely since Omega Protein is removing all of the whales’ food from the area. Fishermen are also concerned and want to know if the fall striped bass run is in jeopardy due to these ships fishing in the bight. (Note: It is my opinion that since this year’s young-of-year (a.k.a. peanut bunker) are being seen at super saturated levels in our back waters, we are going to have an outstanding fall striper season, especially for the surf angling crowd.) 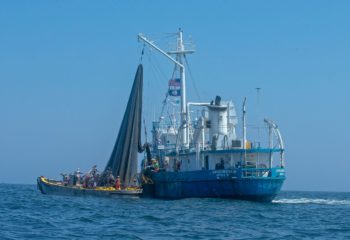 Folks are asking what they can do, and what can be done to stop this harvest so that the whales will stay in the bight. The reality is that there is nothing we can do within the existing framework of the fisheries management system except wait for the next Atlantic States Marine Fisheries Commission (ASMFC) meeting session to voice our concerns. But even this would be ineffective because the ASMFC has already voted AGAINST implementing ecosystem-based fisheries management methods, which would leave more fish in the water for predators, and is INCREASING the menhaden catch limit another 8% to 214 MT for 2018 and 2019. Note that this level EXCEEDS the quota that was in place when overfishing was occurring back in 2012.

If you are not familiar with it already, please make a concerted effort to learn about ecosystem-based fisheries management. Bunker should NOT be managed the same way that you would manage a striper or a fluke or any other “single species.” The role that bunker play in the marine food web is far too important to be managed the same way other fish are. This is the most important message for all to grasp. It’s all about leaving enough menhaden in the water so they can provide the ecosystem-based services (like converting algae into gamefish growing protein) that are filled by no other species!

I run a small grassroots organization called Menhaden Defenders, and we have been at this bunker thing for years. Anglers and other concerned citizens have many ways to stay engaged in the issue. Here are a few:

Yes, ASMFC allows the practice of reduction fishing to continue at this industrial scale, and it will not stop until the annual catch quota is met. Staying informed and spreading the word about what bunker are and why they are so important to the marine ecosystem will help to educate others about this important issue. Please show up at upcoming meetings when called upon and speak your mind!

Remember, No Menhaden = No Bass, No Tuna, No Whales, No Osprey… No Nothing.