What started as one commercial fisherman taking a handful of young people out fishing with him has evolved into a crewmember apprentice program with more than 12 participating boats and 50 apprenticeships over the past four years. Inspired by the need to address Alaska’s “graying of the fleet” – a threat facing commercial fisheries around the country – longtime Alaska salmon troller Eric Jordan on the F/V I Gotta took his first apprentice out in 2014 and was quickly overwhelmed by the demand.

Impressed by the interest, Eric teamed up with Sitka-based Alaska Longline Fishermen’s Association (ALFA) to formalize the crewmember apprenticeship program and make it part of ALFA’s Young Fishermen’s Initiative. With the help of a grant from the National Fish and Wildlife Foundation, ALFA was able to expand from two host skippers in 2017 to 12 in 2018, allowing the program to engage more young people and offer apprenticeships in new fisheries. 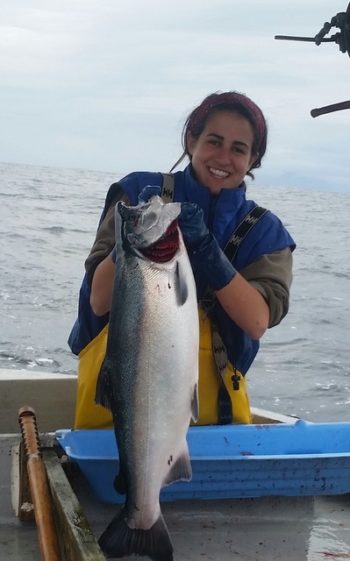 “It’s exciting to take young people fishing for the first time and to share with them my love for the ocean and the fish,” Jordan said. “Our crewmember apprentice program has really taken off, and we are already seeing positive results. Some apprentices have gone on to fish full seasons on other boats, and one has even bought her own boat!”

ALFA’s crewmember apprenticeship program has multiple underlying goals: to expose more young people to Alaska’s fisheries, to increase opportunities for young fishermen to gain important experience and skills out on the fishing grounds, and to inspire the next generation of coastal fishermen to be effective ocean stewards. By getting more young people out on the water, ALFA is also increasing the next generation’s understanding and appreciation for the importance of small boat fisheries for coastal economies.

“From our perspective, every apprenticeship is a success regardless of whether the participant decides to pursue a career in commercial fishing,” said ALFA’s executive director, Linda Behnken. “For us, it’s as much about promoting education on our local fisheries and raising the next generation of advocates for sustainable fisheries and healthy oceans as it is helping young people land that first job on a commercial fishing boat. Whatever their future plans, we want their first experience to be positive, safe and inspiring, and we want them to develop the deep connection to the ocean world that has sustained fish and fishermen for generations.”

Given the diversity of fishermen and fisheries in Alaska, ALFA’s crewmember apprenticeship program works closely with each participating skipper and apprentice to help tailor an experience that will meet everyone’s needs. Apprentices have the option of a short or long-term apprenticeship, lasting from a day to a week, month, or fishing season depending on their situations and the needs of the host skippers.

“The Young Fishermen’s Development Act is a critical piece of the puzzle as it will allow us to continue to grow our crewmember apprenticeship program and support other communities in launching similar programs,” said Behnken. “While it’s important for local fishermen to help develop and pilot local solutions for the challenges our industry faces, it’s essential that we secure long-term federal funding to help make these local solutions sustainable.”

Back on the water, Jordan will be bringing out four young people during this year’s salmon season to learn the ropes of fishing and experience the fishing lifestyle firsthand. For Jordan, each apprentice offers an opportunity to change the future and celebrate a way of life that has supported him, his community, and Alaska as a whole for generations.

Elizabeth Herendeen is based out of Southeast Alaska, where she works with nonprofits such as the Alaska Longline Fishermen’s Association and SalmonState to help protect and promote Alaska’s wild fisheries and fishing communities.
View all posts by Elizabeth Herendeen →

7 comments on “Training the Next Generation of Local Fishermen”