As the summer heat descends upon the Chesapeake Bay, conditions can become extreme for striped bass, Maryland’s state fish. I wrote about the issues that impact striped bass catch and release mortality in the fall of 2017. Beyond deep hooking, some of the biggest detriments to returning your catch are stress factors related to the species. Shallow hooking, salinity, water temperature, air temperature, dissolved oxygen, and proper handling are all key factors in a fish surviving to fight another day. If recreational anglers are true conservationists, we should consider all these factors whenever we fish for striped bass.

Back in the late 90’s there was a big push to open the Susquehanna Flats in the spring for a catch and release season. Much of the science about striped bass catch and release mortality originated from that long management process. Scientists found that when salinity is completely absent, striped bass mortality skyrocketed even with single hook lures and circle hooks. While we all know that gut hooking fish is generally lethal, this new information empowered managers to make the right decision for the fish. Water temperature monitors were placed in key areas of the flats, so that when the water hits 63 degrees for a certain time period, the fishery can be closed.

It is incumbent on us to be good stewards of the resource. Many recreational anglers these days focus on the overall experience vs filling the cooler. The daily creel limit for striped bass in Maryland is only 2 per angler, and so catch and release is part of our day-to-day life on the Bay. I don’t think I’d be interested in going out if I kept the first two legal fish and called it a day. It has been a long time since I harvested a striper.

The past few summers have been very warm. As the striped bass population has dwindled, they have become more concentrated. Unfortunately for the striped bass, the location is well known and is in an area that is prone to low dissolved oxygen and salinity levels. The result has been an abnormally large number of floaters (dead discards) in the areas of concentration.

Maryland’s Department of Natural Resources took a strong position in trying to mitigate deep hooking by mandating circle hooks for the 2018 striped bass season. The regulations took effect just in time for our summer. Hopes were absolutely high that it would make a difference. Unfortunately, a circle hook isn’t a silver bullet to solve the problem.

Circle hooks are incredibly effective at avoiding deep hooking. Prior to the regulation, it was common for fishermen to use treble hooks while bait fishing for striped bass. So, this is a quantum leap forward in management. However, there are many other factors that go into being a responsible angler, and circle hooks only solve one part of the problem. 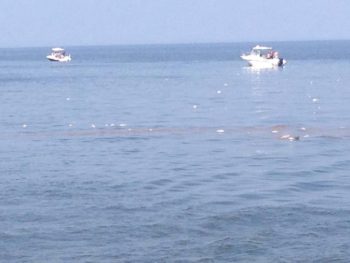 The Chesapeake Bay has posted all-time record rainfall amounts for the month of July. There was also flooding in late May and late winter. The influx of fresh water and nutrients has turned areas north of the Bay bridge into a stressful environment for striped bass. A combination of low salinity and low dissolved oxygen in deeper water spells trouble that circle hooks can’t be expected to solve. As an example, I submit this image which was taken BEFORE the major July flooding. Every shiny object in this image is a dead striped bass. Some are small, and some are good-sized fish, but they are all dead.

The knee jerk response could be that anglers aren’t in compliance with the circle hook regulations and these are discards from deep hooking. That assumption is not accurate. In fact, the finest group of men and women you will ever meet, Maryland’s Natural Resource Police, have been checking vessels with great regularity. Only one vessel has been found to be using a J hook, and that was after the officers checked well over a hundred anglers.

We have to do better than circle hooks, folks, if we want to conserve striped bass populations. Luckily, it isn’t rocket science. If you plan to catch and release, do a few simple things that will go a long way in preserving the species. First, please keep using circle hooks! Second, check out this fantastic website for information on water conditions. If you have a choice, fish in shallow water where dissolved oxygen is usually higher because oxygen can diffuse through wave action; plus, stratification issues that exist in deeper areas aren’t a factor. Also avoid low salinity areas, which are frequently found in the northern reaches of the bay.

At some point, the desire to be a good steward of the resource should override the desire to catch a big fish. We have the power to make a difference, if our egos don’t get in the way.