Photo: a striped bass caught Block Island by Steve Brustein of Maine on No Fluke Charters. Photo via Dave Monti

Striped bass are the most iconic fish on the East Coast. Countless books have been written about them. Small coastal communities from Maine to North Carolina have depended on striped bass for centuries. We’ve loved stripers since before we were a country. That may seem overly dramatic, but it isn’t. The first fishery law was passed to protect striped bass in Massachusetts when it was a colony.

“one of the best fishes in the Country . . . a delicate, fine, fat, faste fish…. The English at the top of an high water do crosse the creek with long seanes or bass nets which stop the fish; and the water ebbing from them, they are left on the dry grounds, sometimes two or three thousand at a set, which are salted up against winter, or distributed to such as have present occasion either to spend them in their homes or use them for their grounds.”

In 1639, something happened that would change everything for stripers. The people of Massachusetts saw that striped bass were becoming depleted. They responded by forbidding the use of striped bass as fertilizer. This first step in protecting our resources was the precursor to the first environmental impact statement, the eventual passage of the National Environmental Policy Act and the passage of Magnuson-Stevens and countless regional fisheries legislation. Heck, in 1670, Plymouth, Massachusetts (at the time just a colony) built a school and ran it funded on striped bass sales. The Plymouth Colony school then became the standard for our public-school system. Like I said before, striped bass are the most iconic fish on the East Coast.

Striped bass management has taken many twists and turns since the 1600’s. Currently, we are at a crossroads. Striped bass are managed at ASMFC by biological reference points (targets and thresholds) to assess the stock status of striped bass. The current fishing mortality target of 0.180 and threshold of 0.219 were established from the 2013 benchmark stock assessment. 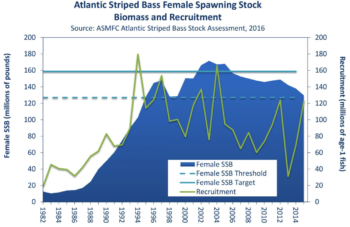 Charts help when trying to understand how this translates into the fishing experience. Do you recall fishing for stripers from 2000 to 2006? Spectacular doesn’t begin to describe it. This was the only time in recent history that the spawning stock biomass (SSB) was above the target. From 1995 to 2006, recreational anglers doubled our trips from 5 million to 10 million. If anyone is truly worried about the economy of striped bass, make sure the SSB is around the target. Adding five million recreational fishing trips is quite a boost to all those coastal communities, boat builders, hotels, and restaurants.

If we slip below the threshold, management action (lower fishing mortality with stricter regulations) is not an option but rather a requirement. Right now, we are extremely close to the threshold. In fact, there’s a decent chance we have dipped below it. The numbers aren’t in, but I’m willing to bet that the final waves of stripers for 2017 will show stripers taken at a much higher frequency that expected. If you saw the pictures from the last hurrah of the 2011 fish in the Chesapeake, you already understand. Those fish aren’t going to recruit to the SSB because we were harvesting at unsustainable rates, but the numbers will tell us that shortly. 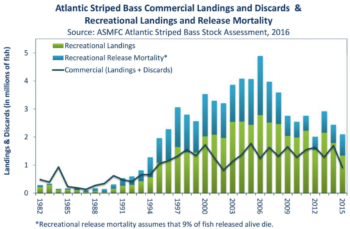 If our fisheries management history indicates how we’ll respond, we should be extremely concerned. As the stock declines, the natural reaction hasn’t been to set stricter limits and conserve the species. The reaction has been to lower the bar.

Let’s be more specific. Since striped bass aren’t managed on a strict poundage quota, they are open to exploitation. The target and threshold are biological reference points. If those reference points are lowered, harvest can increase. Look at it this way, if a fish stock is approaching a threshold where mandatory reductions will be triggered, why not just lower the threshold? It’s the same tactic used with water quality standards, state testing and public schools, and just about any benchmark we try to standardize. If you can’t reach the goal, then lower it.

The next steps for conservation-minded anglers are blurred. Normally, I would suggest sending ASMFC commissioners an email stating that you don’t want to harvest more stripers while the stock is declining. However, 158,000 emails did nothing to help menhaden last month. Is it time for another tactic? Maybe readers can help me get creative?

11 comments on “What to Expect with Striped Bass”