Editor mocks fly fishermen, light-tackle anglers, and everyone else who benefits from “abundance.”

Last week I stumbled across what seemed like a somewhat useful piece from The Fisherman Magazine titled “ALPHABET SOUP: TOP 25 FISHY ACRONYMS.”

The intent at first seemed to be to bring some clarity to the mess of words/acronyms regularly used in the fishery management process. 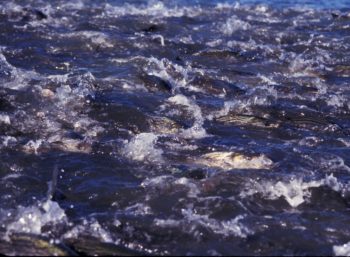 This photo and top: menhaden off Montauk, NY. Photos by John McMurray.

Managers fire off such acronyms regularly at hearings and public meetings. The truth is that unless you are a career marine biologist, fishery manager or industry lobbyist, it’s damn hard to understand any of it. Sometimes, at fisheries management meetings it almost seems like folks are speaking in a different language.

To NOAA’s credit, they compiled a list of definitions and clarifying information a long time ago. So has the Atlantic States Marine Fisheries Commission. Some of the regional councils have done such for their constituencies as well. Really, if you Google “fishery management acronyms” there’s a ton of info.

And so good on The Fisherman Magazine for cutting and pasting a lot of that stuff, and putting it out to anglers so that it’s right in front of them. But I’m not so sure that was the intent. Because toward the end, we get the gratuitous editorial you often see in this particular editor’s writing… In this case, discrediting what he incorrectly describes as an attempt to create new terms and statutory definitions by, gasp, environmental groups.

In that respect, the author clearly mocks the term “abundance” as it relates to fish stocks, not to mention those who depend on it. Here’s an excerpt:

“In preying upon angler emotions in promoting abundant fisheries (as in “we need fish in such vast abundance that I can’t help but catch a few on every trip even while using the new fly I tied with dental floss and pipe cleaner”), some of the very same groups who helped create the statutory definition of “overfishing” while manufacturing acronyms like ACL and AM, hope to somehow influence Congress into writing up yet another mealy mouth, statutory definition.”

For one, no one “manufactured” the definitions of “overfishing,” annual catch limit “ACL” or accountability measures “AM.” Such terms were defined during the deliberative law making process and in some cases clarified by the courts. Each of these terms is useful as far as maintaining stocks at a level where anglers can actually catch them.

Second, I’m fairly certain no one is trying to manufacture a “mealy-mouthed” statutory definition of abundance.

“Abundance” is a term long-used by angling advocates in the context of keeping enough fish in the water so that we can reliably find and catch them. Simply put, most reputable anglers and angling organizations have supported the concept that “abundance” creates “opportunity” which is a key to the angling “experience.”

I want to note here that the author also mocks the term “experience” because I want to touch on that also.

Managing for abundance has wide support 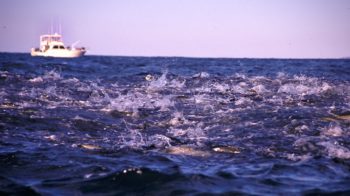 Let’s be clear about one thing here. The idea of moving away from managing for maximum sustainable yield – taking as much out of the stock as possible while still allowing it to replenish itself – and instead managing for “abundance,” which fundamentally enhances the recreational “experience,” is not some “new” environmentalist or fly-fisherman conspiracy. The recreational community has been promoting it for decades.

The Theodore Roosevelt Conservation Partnership (TRCP), in coordination with the above-mentioned organizations published “A Vision for Marine Fisheries Management” in 2014, updating it in 2016. Yes, I’ve been somewhat critical of parts of that document, and I continue to question some of its recommendations, but it’s important to point out here that it harps on “abundance.”

Taken as a whole, anglers are not particularly good fisherman. We don’t use nets, longlines, traps, etc.; we use rod and reel. That may be the most “sporting” and enjoyable method and the one that enhances “experience,” but it is also the least effective.

That becomes even more true when you consider the saltwater fly-fishing and light-tackle stuff that the author ridicules here. And how about the surf casters… those folks constrained to fishing from the shore? It is no coincidence that these parts of the recreational fishing community tend to be the most conservation-minded, and it’s precisely why I feel the author belittles them here.

I do get it… Precautionary management and the sort of “abundance” that it brings, probably isn’t great for the commercial fleet because it constrains catch, and to some extent, hurts commercial harvesters’ bottom lines. It’s also not great for some charter/party boat operations who fish every day, and are pretty good at finding/catching fish on a regular basis, even when stocks are at low levels. And some of those operations choose to market their trips as a chance to fill coolers instead of simply enjoying the “experience” of fishing.

But for the rest of us? The light-tackle guide, the weekend angler, the guy who fishes from shore, not to mention those saltwater fly-fishers, well, precautionary management and abundance is a good thing because it gives us access and opportunity.

It’s important in all of this to keep in mind that marine fish are a public resource, and as such, should be managed for the public trust. In other words, there should be enough around so that the greatest number of people can access them (commercial fishermen, charter/party boats, AND the general fishing public).

In that context managing for abundance would seem to make sense, and when explained, most anglers understand that managing for abundance benefits them. Unfortunately, as I’ve said before, such anglers are likely a “silent majority.” These are the people who fish just to have fun and don’t want to get involved in the often contentious and always difficult-to-understand management process. And I don’t blame them!

Yet because this is the case, those angler’s voices get hijacked by the “professional” crowd – the industry groups, the charter/party guys, the paid lobbyists – all of the people whose financial success depends on killing as many fish as they can now, and not necessarily on abundance, opportunity and experience. It’s not unreasonable to believe that the “silent majority” wants fisheries managed for abundance.

Frankly, I don’t like that The Fisherman Magazine printed an op-ed that makes fun of that silent majority.

Sure, light-tackle charter boat captains make more money when they can put clients on fish with light-tackle or fly gear. But it’s more than that… “Abundance” means we can take our kids out at noon, and we can actually find and catch things like scup, black seabass, fluke and bluefish. We can’t keep most of them, and that’s fine. Because despite how much the author of that piece makes fun of the word “experience,” that’s what’s important about those family trips. It sure as hell ain’t about filling coolers.

Of course, the usual cast of characters will try and label anyone who believes in managing fisheries for abundance as a “tree-hugger.” But let’s be crystal clear about another thing here… Most of us don’t even like trees!

The only reason we’re involved in all of this… the only reason most of us have ever really cared is so we can ensure that there are enough fish in the water so that we can find, play with and/or kill them. That sure doesn’t make any of us tree huggers.

For the great majority of fishermen, for our kids, it’s all about that fishing “experience.” And undoubtedly that experience is enhanced by abundant fish stocks.

They don’t speak for us…

The Fisherman Magazine clearly does not speak for us or represent us. Frankly, neither do groups who are currently seeking to weaken the conservation provisions of federal fisheries management law.

We certainly do understand the arguments for “reasonable access.” Yet I believe that such access is exactly the outcome of managing for abundance.

I can’t speak for red snapper as it’s not in my region, but I would certainly argue that a 120-day fluke season and three fish at 19″ is “reasonable,” especially since it keeps a few fish in the water for the rest of us when it’s clear the stock has had six years of poor recruitment.

I’m not going to argue here that the current law – the Magnuson-Stevens Act – is perfect. In fact, it may stand to be “tweaked” in a few places. And reasonable people are beginning to work together on a compromise reauthorization bill. But in the overall context of managing for abundance, the Magnuson-Stevens Act serves anglers comparatively well.

To put it simply, the alternative is being able to kill more now, but having fewer fish left in the water for us to access. I’m not really down with that, nor do I believe most anglers are.

Hopefully, a good bill will surface after all is said and done. I certainly hope so…

And as far as The Fisherman Magazine goes? I’m not terribly surprised at the author’s editorial… But I am surprised that this sort of inflammatory stuff ran, given some of their readers have to be fly fishers… or light tackle anglers, surf casters, small boat owners and anyone else that depends on abundance. If you fall into that category, it probably wouldn’t hurt to let them know what you think. Email: info@thefisherman.com