As we get into the thick of tuna season right now, and plenty of “large-medium” and “giant” class bluefin tuna are being caught by anglers around Cape Cod, and “small mediums” as well as good-sized yellowfin in the New York Bite, I thought it more than appropriate to say this…

It’s not okay for an angler to take his or her bluefin, or yellowfin, or bigeye or any fish for that matter and sell it to the local restaurant through the back door… for gas money.  Unfortunately, this kinda thing happens pretty regularly up here.  Don’t tell me that it doesn’t, because I hear the bragging frequently.

And don’t tell me that it’s a victimless crime.  The hard-working full-time commercial fishermen are the first to get screwed.  But it’s the consumer as well, who ends up eating a fish that hasn’t been properly cared for without knowing the risks (in the case of tuna, it needs to be flash frozen so as to get rid of parasites).  And the fish?  Well, none of that backdoor stuff gets reported so we have no idea the scale of such removals…  And that affects how these fish are managed and ultimately the long-term sustainability of the stock.

Let’s be crystal clear about one thing.  You cannot legally sell tuna to anyone but a federally permitted HMS (Highly Migratory Species) dealer and you aren’t supposed to do so without the proper federal permits and state landing permits.

Under no circumstances are those backdoor sales legal. 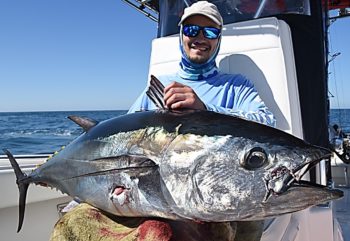 But really, that’s not the main reason I felt compelled to write this.

What’s starting to become a big problem is the HMS “Charter/Headboat” permit, which inexplicably allows anyone with such permit running a charter to sell their bluefin, as long as they are of commercial size (73”-plus).

So here’s the deal… If I understand the intent of the permit correctly – and I’ve discussed with NOAA HMS, so I think I do – you can’t run both a commercial and charter fishing trip at the same time.  Directly from HMS Permit FAQs site:  “This permit allows a vessel to fish both commercially for tunas and recreationally for HMS, although not on the same day.”

According to the NOAA Fisheries HMS Recreational Compliance Guide, “The size class of the first bluefin tuna retained will determine the fishing category of all persons aboard the vessel for a given day. If fish >73″ retained, they may be sold in accordance with the General category seasons and retention limits.”

So, if you are running a charter, and guys are paying for the trip, but you catch a commercial size fish, is it then a commercial trip?  Don’t really get that.  I mean, given the above, are these guys not supposed to pay for the trip then?  And whose fish is it?  The captain’s or the people paying for the trip?  There’s all sorts of ambiguity here that no one seems to have a clear answer for.

It’s pretty apparent how this permit just invites non-compliance.  It’s hard to believe that a captain who caught his/her “recreational” fish under 73” wouldn’t just discard (read: “high-grade”) any such fish, should they land a commercial grade (>73”) fish, particularly when that commercial fish is worth sometimes big bucks… although generally it isn’t worth so much now that the recreational/charter guys have driven the price down by glutting the market (will get back to that in a minute).

I don’t understand NOAA Fisheries’ rationale for creating such a dual use permit in the first place.  I mean, you are either chartering or commercial fishing, right?  If I understand the permit description, it’s pretty clear you’re not supposed to be doing both…  But let’s move on from such vagueness and get to the meat of this.

There are A LOT of BIG fish being caught and sold right now in the Cape area.  Perhaps more than ever.  There are a few reasons for this, other than the obvious local aggregation of fish.  For one, the gear is so much better now (and make no mistake, I’ve benefited from this personally, although I sure as hell don’t sell any of it) that you can beat a big tuna with easy-to-use spinning gear.  No, it’s not easy, but it’s still a hell of a lot easier than it used to be, and, well, it’s entirely possible to land an 80-plus inch fish on such gear these days.  This kinda thing just wasn’t happening 10 years ago.  Today, people seem to be doing it with more and more frequency.  And I do get it, because it’s freak’n’ awesome seeing a fish like that explode on a stick bait, or popper.  Yet, for better or worse, with social media and such, when these fish do get into range, EVERYBODY knows about it.  And the armada descends, and these fish get pounded.  Not just because they are fun to catch, but because they can be sold for good money, although like I said, not that good because the market gets pretty flooded.

So the current situation is probably not good on a number of levels.  And here’s the thing.  I’m pretty gosh darn sure that most of those fish aren’t being sold legally.  For one, while yes, an HMS Charter/Headboat permit allows you to sell that fish, you still need a state permit to land it.  And how many charter boat operators have those?  I mean, in most states they are capped (only a certain number can exist) and are pretty difficult to get.  Furthermore, if you are commercial fishing, you need a federal Commercial Fishing Safety Inspection Sticker, issued by the Coast Guard.  This requires a sizable investment in a commercial grade life raft, immersion suits, and a host of other equipment not typically found on your average charter boat, particularly the center console ones.  I’m not saying that some of them don’t have all that stuff and have completed a Coast Guard dockside commercial fishing vessel safety inspection.  But I am pretty darn sure that A LOT of them, doubtlessly most, don’t and haven’t.

So brass tacks…  Bluefin are getting pounded because of a price tag on their heads, by people who probably aren’t supposed to be selling them.

It is really creating problems for the “real” commercial guys with all the right permits, as the price per pound is basically tanked right now.  And it sure ain’t good for the bluefin stock.

With all this stuff going on right now in New England and elsewhere (New York is no exception), why isn’t enforcement doing anything about it?  I mean, it’s all over social media.  Guys beating their chest about market fish etc., and the market price pretty much tanking.

And believe me when I tell you that enforcement personnel at high levels have been made aware of what’s going on, both on the record and off.  But still, not much happening as far as boots-on-the-ground enforcement.  I don’t get it.

There is no cap on those HMS Charter/Headboat permits right now, and with thousands of them already in existence, this is a problem that will likely only get worse, rather than better if nothing is done about it.

Perhaps what is even more significant about all of this is that stupid HMS Charter/Headboat permit blurs the line between recreational and commercial.  It’s obvious that anglers target tuna for the pure adrenalin rush and, yes, for the meat, although that’s absolutely secondary (and release is always an option).  Commercials folks, on the other hand, seek to kill as many fish as possible within the shortest possible time.  That leads to completely different approaches, and more importantly, attitudes, when it comes to tuna.  But that seems to be changing rapidly…  And that’s not good on a number of levels…