For decades, numerous coastal communities in the Chesapeake Bay were alive and vibrant. Charter captains and recreational anglers would leave from ports like Solomon’s Island, Point Lookout, Breezy Point, and Tilghman Island in Maryland every day in search of a variety of sport fish. Each port had its own hotspot. The Gas Docks, the Gooses, Cornfield Harbor, the Triangle, the Hook, and the Diamonds were places of legend. Resident striped bass would settle in after their spawn in mid-spring. These post-spawn residents would feed heavily on polychaete worms (May worms) for a few weeks. The worms hatch and swim to the surface in enormous balls. Striped bass gorged themselves to replenish their reserves that were spent making little striped bass.

This only lasts for a short window. After the worm hatch, stripers return to feeding on menhaden and anchovy for the rest of the year. The fish would associate with a river mouth, channel edge, or structure. You didn’t have to go far to find a school of striped bass, weakfish, bluefish, as well as many bottom dwelling species like croaker, black drum, flounder, and spot. But, something has changed and not for the better. 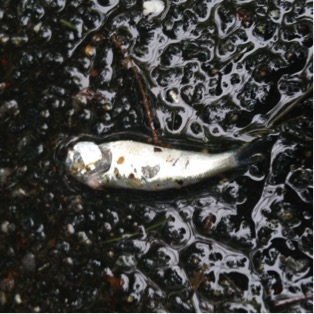 I live in an area known as Eastern Bay. It is a rural setting that is hard to reach from the Western Shore. Around 2006, we started to see that something was wrong. I was eating a softshell crab sandwich with my nephew at a waterfront restaurant near Kent Narrows. There was a charter boat from Chesapeake Beach tied up to the bulkhead. “What the heck is he doing here?” Chesapeake Beach is a long run from across the bay. There are so many good fishing spots between Chesapeake Beach and Kent Narrows, why in the world would he burn all that fuel? We spoke with the captain. He shared that he moved his boat here for the season because fishing was so poor by his home port.

As each year passed, striped bass schools became more concentrated. Instead of schools located in each river mouth, they started to stack up in very small areas. At first, it was the mouth of Eastern Bay and Poplar Island. Then it was the mouth of the Chester River just north of the Bay Bridge. Almost all of the other areas were void of fish. During the same period, the bottom fish that used to carpet the bay were all but absent. Some years we would have a good showing of spot but the croaker and flounder haven’t been around in numbers for a decade.

Something is out of balance and since the Chesapeake Bay produces more than 70 percent of the striped bass stock, it behooves us to try to figure it out. Maryland Department of Natural Resources scientists Tom Parham and Jim Uphoff may have a clue in solving mystery. In response to concerns from fishermen on the Western Shore, they compiled data from the Eyes on the Bay monitoring system, as well as yearly core samples. This data shows nothing short of a complete collapse of the Western Shore benthic community from the Potomac River north to almost the Bay Bridge. Low oxygen levels (dead zones) killed just about everything that lives on the bottom in depths greater than twenty-two feet. The polychaete worms that were once abundant sources of protein for post-spawn stripers are gone from the area. These worms don’t need much oxygen to survive. However, they need a little and they aren’t getting it.

From May to June, worms appear in stomachs of striped bass frequently. Adult menhaden are still the major source of protein for stripers over 25 inches. This is incredible considering for most of this data set menhaden populations were at historic lows. The remainder of the diet includes clams, crabs, anchovy, and a host of other bottom dwelling prey items. Does this explain why striped bass are congregating in such confined areas? It is certainly a smoking gun. Does it explain the absence of bottom fish? I would say absolutely. It also puts an added level of importance on the menhaden population. If one of the main sources of protein for striped bass has disappeared, we must ensure the stability of the other prey items.

As you may recall, in December of 2012, conservationists and recreational anglers won a big victory for menhaden. The coast wide menhaden stock sat at eight percent of a virgin population and eighty-five percent of the menhaden harvest took place around the Chesapeake Bay. No wonder why the stripers were eating so many worms! Two years after the menhaden harvest reductions, we started seeing peanut bunker again after almost a decade of absence. Schools of juvenile bunker are appearing in late April.

The lack of worms has been offset with the arrival of juvenile menhaden as well as an increase in adult menhaden.

You would never guess this is going on. Social media is flush with pictures of the 2011 year class of striped bass. The layman sees these images and smiles at the bounty the Chesapeake Bay has to offer. The truth is nothing short of ominous. There are one or two schools of stripers left. They aren’t hard to find. Turn your head to the left while driving east over the bay bridge. Look for the fleet of hundreds of boats on the weekends and fish there. Anglers can zero in on these schools and the efficiency in frightening.

We can say with 100 percent confidence that the dead zones have crippled large areas of bottom, but these areas can rebound. If we have moderate rainfall in the spring, the dead zones won’t be as bad and the bottom creatures can recover. The pollution controls we have in place are starting to work; we just have to make sure those controls stay in place. But all of this takes time, and some of the recovery factors are out of our control. Our beloved striped bass still need to eat.

Menhaden are currently available to fill the void until the bottom can recover. Well, at least this year they are. This fall, menhaden are going to be under the gun yet again. Amendment 3 for menhaden management was introduced in 2015 to address several concerns in the fishery, including the adoption of ecological reference points, which would manage menhaden for their importance as forage and role in the greater ecosystem rather than as a species that is just harvested. As I’m sure you’ve surmised, the other side wants to harvest more menhaden. We can’t let that happen. Menhaden must be managed for their ecological significance.

The Menhaden Management Board is on track to review the full draft Amendment at their August meeting in Alexandria, VA. Public hearings will be held on draft Amendment 3 in September and October. Final action on Amendment 3 is scheduled for November 14, somewhere in the Baltimore-Washington Metropolitan Area.

The Chesapeake Bay and its coastal communities are hurting. We are doing everything we can to stem the tide, but we need help. This November 14 meeting is the culmination of ten years of conservation work, and your attendance matters. We all have jobs and families and responsibilities, but we also have this one chance on this one day to secure a future for our fish and everyone who depends on them. In 2012, we had hundreds of anglers packing the room and we won, but we need even more in November because an increase in menhaden harvest could spell disaster for the 2015 year class of striped bass. I ask all of you to mark November 14 on your calendars; it will be one of those days you will remember forever.

6 comments on “Striped Bass Need Menhaden Now More Than Ever”