On April 6th Congressman Garret Graves of Louisiana and three of his Congressional colleagues introduced H.R. 2023, the “Modernizing Recreational Fisheries Management Act of 2017.” To many of us on the West Coast, this bill clearly represents an end run around the federal fishery management processes. 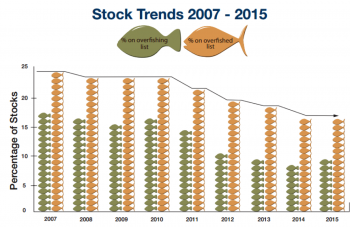 The Gulf of Mexico Fishery Management Council has used the best available scientific advice to keep Gulf red snapper stocks in rebuild mode for longer than some Gulf recreational anglers would like. Removing these rebuilding requirements and gaining access to fish stocks before science deems it safe is a goal that some Gulf groups have had for years.

However, unlike previous legislation aimed at opening up access to rebuilding snapper stocks, H.R. 2023 is novel in its national implications. For those of us whose communities, businesses, and recreation depend on many of the stocks that would be affected by this bill, it is worth taking a moment to consider what its impacts would be in our own parts of the ocean.

So what exactly is so bad about H.R. 2023? And why, in our view, would it spell trouble for fisheries here on the West Coast?

H.R. 2023 would allow the removal of annual catch limit (ACL) requirements for certain fish stocks managed by our own Pacific Fishery Management Council. For those of us who value sustainable mixed-use stocks, this is a poison pill.

ACLs are a critical management tool for salmon, the lifeblood of West Coast fisheries, as well as a number of other stocks for which the ACL requirement would be waived. Without them, marginal differences in salmon catch that can make or break a run can be overshot, threatening the long-term survival of these sensitive and valuable fisheries. The removal of ACLs for mixed-use stocks is a shortsighted solution to a long-term ecological problem.

If there’s one thing we’ve learned from recent Congressional actions, it’s that terms like “alternative,” and “flexibility” (featured strongly in H.R. 2023) are Orwellian catchphrases for rollbacks of successful management approaches that sustain fish and fisheries. And that history of success is telling. Since the 1990s when our west coast groundfish fisheries crashed, two-thirds of those depleted stocks have been rebuilt to fishable levels. While that itself is a major success, that still means one-third of our stocks are still in rebuilding mode and need to adhere to the annual catch limit strategies that have brought them back from the brink of collapse.

Why, oh why, would we rely on “alternative methods” or “flexible approaches” when we’ve seen a resurgence in working waterfronts with the tools we’re currently employing?

We respect and value the principle of using the best available science to determine best management strategies. By attempting to eliminate annual catch limits for certain fish stocks, H.R. 2023 injects an unhealthy dose of politics into the fisheries management mix.

We hope that politicians and fishermen are able to see through H.R. 2023’s national ambitions and consider what it really is: just another red snapper bill that would spread the Gulf of Mexico’s problems to the rest of the country. With salmon stocks in decline and sections of the coast closed to fishing this season, this is the last thing we need.

About Network Voices of the West Coast

View all posts by Network Voices of the West Coast →