Tough decisions that benefit the “public trust” come with the territory 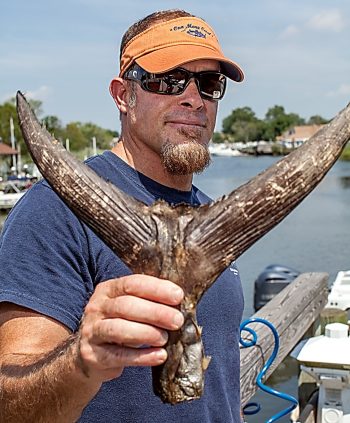 There is nothing more I’d rather NOT be doing than sitting around squared folding tables, engaging in the sort of debate that makes you squirm in your seat, while your “friends” send you texts about how good the fishing is, most of the time in a blatant attempt to rub it in.

That said, I have always considered it an honor to be able to serve alongside some of smartest folks I know. Even the Council members I tend to disagree with on, uhm, everything, are stand-up people. In the end, we all really just have different perspectives.

Yes, there is some satisfaction in the belief that I was there trying to do some good, for the resource, for the future and for my kids, not to mention the sustainability of my charter business… by working to ensure there are actually a few fish in the water and enough forage to create current and future opportunities.

I’ve always felt that I’m there representing what I believe is a large constituency of conservation-minded anglers – perhaps a silent majority – who benefit from the sort of abundance that creates opportunity for a broad range of stakeholders.

But, the truth is that it’s really difficult most of the time. The science as well as the entire management process is often hard to grasp, unless you are a career bureaucrat, biologist, industry lobbyist, or some combination of those. There is a steep learning curve. And, there’s usually a lot of prep reading. None of it is a requirement, but if you aren’t up to speed when you walk in that room, the conversation will quickly bypass you.

Yet, what’s way more trying than the time commitment, missed charters, time away from the family etc., are the often painfully-hard decisions that regularly HAVE to be made. And doing the RIGHT thing in the context of sustainability is often perceived as betraying fellow fishermen.

To put this in context, I testified in front of Congress back in early April, against a bill intended to delay Council-recommended conservation measures for the summer flounder stock. You may find detailed reasons for such opposition here: Written Testimony on HR 1411.

While that testimony got fired around the internet, blowback was immediate and clear from those parts of the industry who don’t believe in the need to make reductions when a stock is in clear decline. Yes, I got beat up pretty good on the usual social media sites for such a “betrayal.” But let me be clear that for every negative, often irate comment, I could always find around a dozen that were in support of reasonable future-focused fishery management, and in particular, support for me in general.

I won’t argue that I don’t represent the party boats who seem to believe they should be able to kill whatever they want and to-hell with the science, but I do represent the average-joe conservation-minded angler who understands we need to keep a few fish in the water. And those people are badly in need of representation in the management process.

All the whining about how I wasn’t representing the recreational fishing community on the Council is frankly bull(expletive). And the threats? The old, fat dudes wanting to fight me? I mean, come on man. Really? It would be kinda funny, if I wasn’t an Irishman with a short fuse.

The point here though isn’t for me to complain about this sorta thing. It comes with the territory. The point is that when the science is quite clear on the need for reductions, the Council has to make those reductions. And even when it isn’t, a precautionary approach is often the best course of action to ensure sustainability. There are certainly plenty of examples – cod is the first to come to mind – that show us what happens we don’t do this.

Of course I always knew there were social and economic repercussions to such reductions. While in some instances they may be overstated, they still exist. And believe me, we hear about them. Yet those hard decisions still need be made. Because if they aren’t, we simply won’t have those fishing opportunities in the future.

Modern fisheries management under the Magnuson-Stevens Fishery Conservation and Management Act is pretty simple. When a stock is on a downward trend, Councils reduce fishing pressure by recommending constraining measures. When it trends up, we can liberalize those measures, some… But not to the point where it’ll cause a decline again.

In the case of summer flounder, the stock had suffered six years of poor recruitment, and the stock is on a definitive downward trend. Not only did all the science indicate this to be the case, but also a lot of us (most?) saw it on the water. And so we had to decrease harvest by over 30% (40% if you count the overage the prior year) to avoid overfishing. Those reductions were made in a way that minimized the economic impact.

That’s what we do at the Council. We consider the best available science (note: in the case of summer flounder the science is some of the best we have), and set commercial quotas and recreational harvest limits that will avoid overfishing, and the stock becoming “overfished.”

This is how the Magnuson-Stevens Act works. This is what we HAD to do under the law. And this is a good thing.

Because given the often immense pressure from that part of the public which benefits in the short-term from extraction – those same aggressive folks who went after me online – the Councils simply wouldn’t make those difficult but critically important decisions to decrease harvest when it NEEDS to be decreased.

And this is why I think the various bills out there intended to tweak the Magnuson Stevens Act by adding more flexibility, could be catastrophic if they ever became law. Because they provide loopholes… Reasons to cave to the pressure and allow overfishing. Having sat around that table for the better part of a decade, I can tell you first hand that, if the law allowed it, Councils would take full advantage of such flexibility to avoid having to address overfishing or the need to rebuild overfished stocks.

And that would really screw most of us in the recreational fishing community. Those of us who depend on healthy and abundant stocks to be successful.

As someone who had done three terms on the Council, and who has run a fishing business for the last 17… I can tell you that while the Magnuson-Stevens Act isn’t perfect (what is?), it’s actually pretty damn good for anglers. It keeps us from overfishing, and ensures there are enough fish in the water so those of us who use the least efficient gear (rod-and-reel), have opportunities to catch them.

Please do keep in mind that when you read the recent editorials supporting the various Magnuson-Stevens Reauthorization Bills, particularly the ones that talk about “flexibility,” they are usually written by folks who rarely attend management meetings. And they are generally written by editors at publications that have advertisers that benefit short-term from extraction.

Having completed my third three-year term, I’ll term off the Council in August. Who takes that seat is still up in the air right now, but I do believe that the management body needs someone there who represents conservation-minded anglers because, like I said, such representation is lacking.

Regardless, I can say with some certainty that the Governor’s top choice on the list knows and understands the science on summer flounder, and understands the need for a reduction. If the party boat fleet thinks a new Council member may advocate for killing more fluke without the science to justify it, well, I’d bet the farm they will be sadly mistaken.

In the end, I’ll be proud of my service.

And I thank everyone who offered words of encouragement, and support when I needed it.

7 comments on “On Being A Council Member”