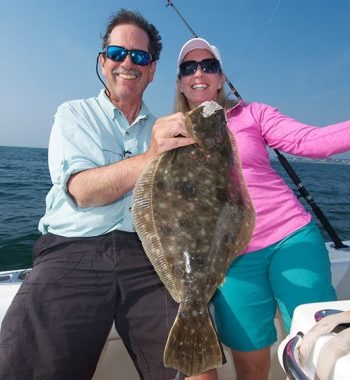 It’s 2017 and the fish are on the run. They’re actually under attack. They have always been running from other fish that seek them out as prey and mankind that catches them to eat. This is only natural.

However, today the fish are under attack from those who seek short-term profit with low regard for the fish or environment. The fish now have the added pressure of proposed laws in this nation (H.R. 2023, the Graves bill) that would allow more fish to be taken with fewer limitations, which could lead to overfishing.

Then, the fish have the added pressure of climate change and the challenges that warming water brings, not only displacement but also high nutrient levels and low oxygen levels in water that can lead to reduced spawning biomass and fish kills.

The challenge is that these conditions not only exist, but we as a nation are now deciding not to do anything about them. We no longer have a “fish first” policy but rather a short term financial gain policy for those that want to fish, fish and fish. And, we are stepping down from our leadership role in the world by not attacking climate change as a global challenge.

Our aim is no longer to grow fish to abundance for all to catch and eat, but rather to prioritize short-term financial gain for some.

Here’s what the fish have been saying about these changes

“I need to breathe. Quick… find me some oxygen,” said the summer flounder to the striped bass. “Hurry… follow me to fast moving water at the deep hole off Warwick Neck where there’s plenty of oxygen to breathe,” said the bass. Fish may not communicate like this but they certainly position themselves in places where there is food and oxygen.

In Narragansett Bay, Rhode Island, fish and environmental advocates have long been combating high levels of nutrients in the water due to fertilizer run off and treatment plant effluent for years. High nutrients stimulate algae blooms (which actually creates oxygen). But as algae decays it uses oxygen and reduces the oxygen level in the water, often well below the levels that fish need. Low oxygen levels have occurred in coves and salt ponds, and particularly in areas that do not get flushed with clean fresh water on a regular basis.

The striped bass said, “Low oxygen can lead to fish kills. The famous menhaden fish kill of August 2003 in Narragansett Bay, RI was caused by a severe hypoxia (actually, anoxic – no oxygen) event.”

And now we have learned that climate change and warming water has created lower oxygen levels in our oceans. In February 2017 a new study found oceanic oxygen levels had fallen by 2%.

Tony the tuna, a bluefin 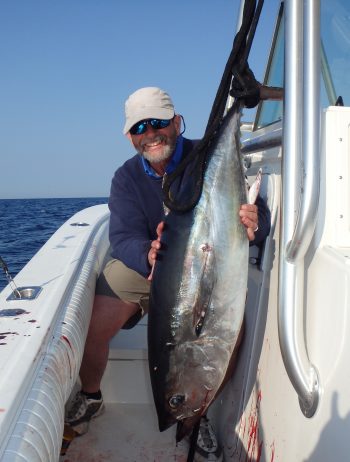 Tony the tuna, a pacific bluefin, said, “The future does not look bright either, as warming water with 2% less oxygen is expected to accelerate (like climate change) to 7% less oxygen by 2100. This means large fish like me will find it harder to breathe, so we will congregate in oxygen rich areas (likely near the surface) making us easier to target and catch, adding more fishing pressure.”

“The good news is that, thanks to a strong federal fishing law in the US, the Magnuson-Stevens Act (MSA), tuna like me are protected. I’m what you call a “highly migratory species” (HMS) because I travel around a lot. But recreational fishermen can only take one or two of me depending on my size,” said Tony the tuna. And, the commercial fishery in the US is highly regulated, too.

These types of regulations are not the case in other countries. About 80% of bluefin tuna is consumed in Japan. Earlier this year a 467-pound bluefin tuna sold in Japan for $636,000, that’s about $1,361/pound. Prices this high encourage illegal bluefin tuna catches and make governments reluctant to engage in conservation measures for endangered species.

Combine the impact of climate change and low oxygen levels with increased fishing pressure, and fish like bluefin tuna will have a very difficult time thriving and surviving unless we put the fish first.
“In the US we need strong federal fishing laws and strong international policies that put climate change and stock rebuilding on the front burner, not the back burner, to protect highly migratory species like bluefin tuna,” said Tony the pacific bluefin.

A summer flounder off New Jersey said, “Our spawning stock has been down for six years in a row and we have been overfished. Things have changed for us, and warming water has forced us north up the east coast over the past 60 years. And today, we need some time to rebuild, to grow our spawning biomass to abundance for all.”

The Atlantic Marine Fisheries Commission, which regulates summer flounder coastwide, found it necessary to reduce commercial and recreational harvest levels by 30% in 2017 because of the species’ declining biomass and overfishing in the fishery.

Earlier this year New Jersey Congressmen LoBiondo and Pallone announced through a press release their intention to introduce legislation that would prevent NOAA Fisheries (aka NMFS) from implementing regulations that would reduce summer flounder harvest limits.

The Magnusson-Stevens Act has given NOAA Fisheries the authority to manage the fish to grow them to abundance for all. Under this federal fishing law over 40 fish stocks have been rebuilt. Weakening federal fishing laws would allow states motivated by self-interest (tourism, the boating and fishing industries) to manage fish with their best interests at heart and not the best interests of the country or the fish. The Magnuson-Stevens Act puts fish first, not local or state interests.

Snappy, a red snapper in the Gulf of Mexico said, “The new US House bill (H.R. 2023) authored by Congressmen Graves of Louisiana is a bill that has the self-interest of the Gulf States at heart and not the best interest of the fish. The Gulf States want to be able to take more fish. So rather than safeguarding the fish for all, the bill aims to advance the interests of tourism as well as the fishing and boating industries.”

However, the bill falls short because it eliminates annual catch limits (ACLs) on species that have been rebuilt; yet these ACLs are the very management tool that have allowed fish stocks to rebuild. Eliminating them is wrong as fish stocks could become overfished before we are able to make stock adjustments.

Snappy the red snapper said, “This bill actually will roll back science-based sustainable management in the United States and allow fisheries to be managed by those interested in short-term financial gains rather than building fish stocks to abundance for all.”

The bill eliminates the use of the best available science as the basis for management and replaces it with practices that could lead to overfishing and endanger the vitality of coastal fishing communities. Without robust fish stocks, communities that rely on fishing could fail too.

What do the fish recommend?

The fish want to grow to abundance. They want humans and other fish to catch them and eat them as prey, as this is their role in nature and in life. In a statement last week the fish said, “Keep the Magnuson-Stevens Act strong so our fish stocks can be rebuilt to abundance so all can catch and eat us. The Graves bill (H.R. 2023) and efforts to stop the study of climate change and its impact on fish are wrong. These efforts are not in the best interest of the fish but in the best interest of those that seek short-term financial gain.”

3 comments on “If Fish Could Talk”