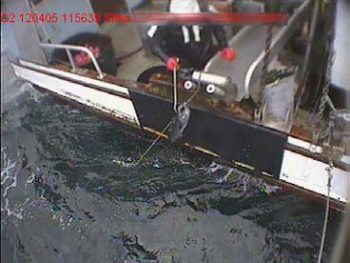 Typical view from an Electronic Monitoring Camera of an Alaskan Sablefish being brought on-board.  With modern EM systems, the frame rate & resolution are set to allow species ID by video reviewers.

In 2013, the North Pacific Fishery Management Council (NPFMC) expanded the North Pacific observer program to include the more than 1000 “fixed gear” (i.e., hook-and-line and pot) boats under sixty feet that participate in federal fisheries for halibut and groundfish off Alaska. The regulation change imposed an observer fee on all groundfish and halibut vessels; it also required these vessels to carry an observer when selected for coverage.

Because so many of the boats in Alaska’s community-based fleet are too small to safely accommodate an extra person (most boats spend up to a week at sea per trip and have living space roughly the size of a station wagon), the Alaska Longline Fishermen’s Association (ALFA) spearheaded an industry-driven effort to secure electronic monitoring (EM) as a viable alternative to observers for selected vessels. Thanks to the relentless efforts of Alaska’s Senator Lisa Murkowski, and with support from the National Fish and Wildlife Foundation (NFWF) and the Oak Foundation, ALFA ran two pilot programs that engaged industry organizations from across the Gulf of Alaska and the NOAA Alaska Fisheries Science Center in EM development.

Now, five years later, the hard-fought battle to allow fixed gear vessels to use EM systems instead of observers is starting to pay off. In 2017, approximately 70 longline and 20 pot gear vessels will be outfitted with EM systems, and vessel operators will simply “flip the switch” when selected for a monitored trip. Thanks to NFWF support, there is no cost to the vessel owners for the EM systems, but the systems must be installed before fishing begins for the year. Installation takes about a day.

Fishermen operating vessels in the 2017 Alaska EM pool will be required to log their trips into the National Marine Fisheries Service Observer Declare and Deploy System (ODDS), the same as operators of the observed boats. This system randomly selects vessels for coverage based on pre-assigned coverage levels by gear type. Because the incremental cost of EM monitoring is much lower than observers, EM boats logging into ODDS will have 30% of their trips randomly selected for monitoring, as opposed to the 11% selected to carry the more expensive observers.

At this point, EM deployment is still grant and agency funded, but proposed regulations have been published that will allow the industry observer fee to fund both observers and EM. The same regulations will allow EM data to be integrated with observer data for catch and bycatch accounting. Integration of EM data will, finally, mark the official transition from EM pilot to implementation – a major milestone!!