To truly understand the question, “Is it time to open the harvest of river herring?,” one must understand the subculture of New England river herring. The Back River was “my” herring run located in the Jackson Square portion of Weymouth, MA. Our harvest days were Wednesdays & Saturdays. On these days, Jackson Square would come alive. Every possible parking spot would have a vehicle tied to that trickle of water running through what was otherwise a few businesses, a small parking lot and the intersection of a few roads in a suburban town south of Boston.

On harvest days, most vehicles within sight had some sort of tank rigged to keep these prized striped bass baits alive. Fishermen may have been the dominant group, but don’t think fishermen were the only stakeholders. River herring runs are places where a diverse group would gather to harvest these historically important fish. I have a vivid memory of standing amongst a group of hard core anglers listening to an Asian woman explain how she transformed what we saw as bait into what she knew to be a delicious, local seafood. And then there were the town appointed wardens and their assistants. These stewards of our weekly gatherings would keep the order and make the whole system of shared harvest work. Although the purpose of the gathering was to harvest, my memories are of the overall community experience. In a world being taken over by digital communications with less and less personal interaction, it seems even more important today that we not lose this traditional aspect of life in coastal New England. 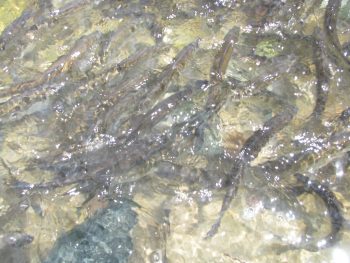 This photo and top: river herring. Photos by Wendy Paquette.

Many have described the decline and collapse of river herring across the Northeast as a “perfect storm.” Between 2002 and 2005, it is generally understood that a combination of unregulated bycatch at sea, drought, habitat mismanagement and other factors lead to an estimated 90% loss of river herring stocks across the region. The only outlier are the runs in Northern Maine, but that is another story for another time.

I was in the room on a Wednesday evening in late 2005 when Dr. Mike Armstrong of the MA Division of Marine Fisheries (MA DMF) suggested to the MA Striped Bass Association that it was time to shut down harvest of river herring across the state. I remember with pride that not a single person voiced disagreement. Despite many in the room having thousands of dollars invested in equipment that was about to be rendered useless, fishermen already knew that the runs were in trouble. That attitude of conservation was shared by most across not only MA but also RI. By the end of 2006 both MA and RI had shut down harvest with full support of the angling community. Even poaching, which had been rampant for some time, went away because of peer pressure and a strong attitude of stewardship amongst the fishing community. Since that time, major efforts by stakeholders in all corners of society have been working to improve the situation concerning river herring.

A couple years later, the Atlantic States Marine Fisheries Commission (ASMFC), which manages river herring along the entire East Coast, passed an action that closed all harvest of river herring. To open harvest a state must now provide scientific evidence that the numbers of fish in any individual run are healthy and the planned harvest is sustainable. The proposal must also include a monitoring plan and have an automatic contingency plan in case the numbers in that run begins to decline.

Fast forward to this past October 25, 2016 during the ASMFC annual meeting, which was held in Bar Harbor, ME. During the ASMFC Shad & River Herring Management Board meeting, MA DMF was granted permission to open harvest of river herring in the Nemasket River, also known as the Middleboro River Herring Run. The proposal was well written and explained that this run has a long history of usable high quality data going back to 1996. From 1996 through 2002 the stock was above 1 million fish per year and like the rest of the regions the stock crashed between 2002 and 2005. The stock slowly rebuilt and since 2011 has been steady or growing around 1 million fish per year. The proposal limits harvest to a very reasonable 10% of the times series “mean” average (55,000 fish). The proposal explains harvest permitting history and a new plan for permitting. The proposal locks in a 50% reduction of harvest if the run drops by 25% and even shuts down harvest in the case of a more severe decline. In this author’s opinion, the proposal is very conservative and well thought out. The proposal passed unanimously.

Although ASMFC has approved harvest, MA has a statewide prohibition not only on harvest but on possession of river herring. To open harvest in MA, the MA Marine Fisheries Commission (MMFC) must approve both removal of the current regulations and, in order to comply with the ASMFC management plan, must enact new regulations. The process to do just that is underway. Public hearings were held in February, and in the next couple months the MMFC will take up the final decision.

During the public hearings some really good questions came up. The most intriguing is the question whether one clearly sustainable run is enough to begin to reverse the prohibition on harvest. Even if the answer to that question is “yes,” how many other runs might be allowed to open over time? MA has eighty (80) runs of which 33 are monitored. Of those 33, fewer than twenty (20) have both the time series of data and the overall number of fish to even be analyzed for potential sustainable harvest. Add in the obvious need for some sort of local management support, and the number of potential runs that might be able to open harvest is down to less than a dozen. Is it worth it?

For this angler the answer is a resounding “Hell Yes!” Just like this community came together to shut down harvest and protect a troubled resource, the time has now come for that same community to join MA DMF and figure out if and how sustainable harvest plans can be designed and managed. There are many on both the far left and right wings of fish politics that want to see this proposal fail. Imagine a world where the debate is on the actual merits of management and not wholesale judgement on either total exploitation or complete prohibition. It only makes sense to begin opening river herring harvest with a single overly healthy run. The Nemasket is my hope that once again a fisherman, an Asian lady and a town warden might walk into a breakfast joint and tell a joke. Once again, New England might be New England.

1 comment on “MA Considers Opening Harvest of River Herring. Is It Time?”