Photo: the Block Island windfarm is nearly complete… now communities and fishermen are learning to live with the turbines. 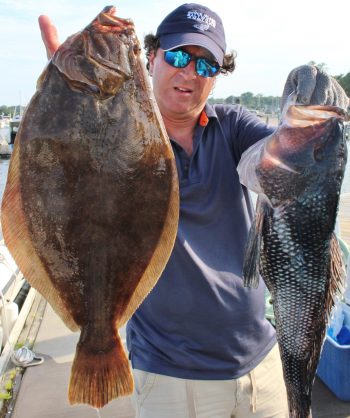 Fishing was good at windmills: Steve Brustein of Portland, ME caught multiple fluke and black sea bass fishing in the Block Island windfarm area this July. As many as 100 boats were fishing in the area.

The first ocean wind farm in our nation is now built and almost operational off the cost of Block Island, Rhode Island. Now we are learning how to live and fish with these giant wind turbines. The Block Island wind farm is a pilot project with five turbines; however, thousands of turbines are now planned for the East Coast.

On Monday, October 24th I participated as a guest panelist in the 15th Annual Ronald C. Baird Sea Grant Science Symposium held at the Coastal Institute at the University of Rhode Island Graduate School of Oceanography in Narraganset, RI.

Dennis Nixon, professor and director of the Rhode Island Sea Grant College Programs (one of the event’s sponsors) said, “We have an amazing group of scientist here today… we hope to leave this meeting with directional information that will help guide our grant priorities during our next round of grant applications. The idea is to help ocean wind power flourish for the benefit of Rhode Islanders and the nation.”

Directional highlights of the Symposium included:

Building trust with effective and direct communication between stakeholders, i.e. residents that can see windfarms, American Indians that hold the lands and waters in their area as sacred and those that utilize the waters in the wind farm area such as recreational, for-hire and commercial fishermen, coastal tourism stakeholders, the shipping industry, etc.

Grover Fugate, executive director of the Rhode Island Coastal Resources Management Council said, “During development of the Rhode Island Special Area Management Plan (SAMP) (initiated in part due to wind farm development in Rhode Island), we learned early that building trust between the fishing community, government and the developer was key. Without this trust, fishermen could have easily sidetracked the project. With careful attention to communication and building a trusting environment, the Block Island project went through permitting in about of year. We have some other coastal projects that have been in permitting and/or litigation for nearly twenty years.” 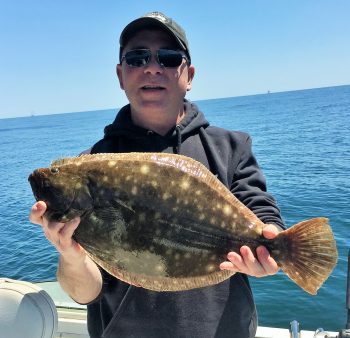 Capt. Rick Bellavance, president of the Rhode Island Party & Charter Boat Association and the initial fisheries liaison for developer Deepwater Wind said, “I felt the key was the relationship and direct line of communication we had with the developer. This direct communication was important; it did not go through fish managers with a chance of things being misinterpreted.”

Exploring and identifying the mindset of various stakeholders, why they support or do not support ocean wind farms. Use key research learnings to help understand concerns and develop awareness and communications models about ocean wind power in general as well as project specific models that utilize positive attributes and address negative attributes in plans.

Developing qualitative and quantitative studies that give researchers, state and federal governments and developers insight into how stakeholders feel so these findings can be used to effectively communicate with stakeholders before, during and after a project is proposed and/or built.

General research themes discussed as being worthy of exploration included:

Impact on coastal renters (and potential property owners): How do they feel about having a view of windfarms during the day and at night when the lights are on (for safety reasons)?

Ecotourism: Do windfarms (specifically the Block Island farm) have the potential to play a role in ecotourism, i.e. windfarm tours, educational workshops for the public, etc.?

Fishing opportunity: Do wind farms and the structure their towers create actually generate or creative more fish or do they just aggregate fish from other areas? And if they pull fish from other areas, what is the impact on the areas that lose the fish, e.g. fishing good at wind farm this summer, but not as good off Pt. Judith and Newport?

Fishing pressure: Do wind farms create added fishing pressure to an area due to a “more fish there” perception (i.e. on any given summer day before construction, 20 or so boats would fish for summer flounder and black sea bass in the wind farm area, while this year with the towers erected there were as many as a hundred vessels fishing in the area)?

“All in” cost of ocean wind farms: How do wind farms compare to other forms of energy generation, i.e. coal fired power plants, nuclear power plants, etc.? With a comparison cost per kilowatt hour (kwh) governments, planners and windfarm developers can use the information to inform the public that pays for the energy. Bonnie Ram, associate director of the Center for Carbon-free Power Integration at the University of Delaware spent two years in Denmark studying wind power. Ram said, “Due to wind power and ocean wind farms, the cost of electricity in Denmark is very cheap. They have so much surplus electricity that they have been exporting quite a bit of it to other countries.”

The above highlights and possible research directions are very preliminary, and much more was discussed at the Symposium. Dr. Tiffany Smythe, the Baird Symposium facilitator from the URI Coastal Resources Center and RI Sea Grant said, “We will be reporting on Symposium input in a way that it can serve as directional research themes for the next round of Rhode Island Sea Grants… and it will serve as stimuli for social scientists wanting to study ocean wind power and its effect on stakeholders.”

Who safeguards the fish in a wind farm?

I asked Capt. Rick Bellavance, former fisheries liaison for Deepwater Wind, who is responsible for the fish in federal waters where windmill leases are granted. Capt. Bellavance said to the best of his understanding it all falls to the Bureau of Ocean Energy Management (BOEM).

BOEM is under the control of the Department of the Interior and not the Department of Commerce, which has the Magnuson-Stevens Act as a guide to manage the fish, along with NOAA’s National Marine Fisheries Service and the regional councils to help develop and implement management strategies and plans to safeguard the fish. So there is potential for conflict with two national departments engaged controlling oceans and fish in one area.

Here are some highlights from Capt. Bellavance on how things worked so far at the wind farms off Rhode Island, both Block Island and the planned Cox’s Ledge area wind farm.

So to answer the question, “Who safeguards the fish in a windfarm?”… by design it is BOEM in combination with input from NOAA, the fishermen and habitat advisory boards, the councils, the states and the developer… with BOEM in control. So far it seems to be working out for the fish. Let’s hope it continues to work.