Photo: peanut bunker accidentally snagged out of a thick school

This year, New Jersey’s surfcasters will be thankful that there are giant schools of this year’s young, “peanut” bunkers moving down the coast, causing striped bass and bluefish to come in tight to the beach within casting distance. It has been decades since this occurred, and it is clear to all of us on the water that conservation measures put into place back in 2012 are working.

That’s why it’s so disappointing that fisheries managers voted to increase the 2017 catch last week. Not only are managers putting the ecosystem health at risk, but they are unfairly giving the lion’s share of the catch to one company in Virginia.

Omega Protein Inc. will get another 22 million pounds of fish, jeopardizing future awesome bass blitzes, whale and dolphin sightings, and osprey and bald eagles flying overhead with fresh bunker in their talons. 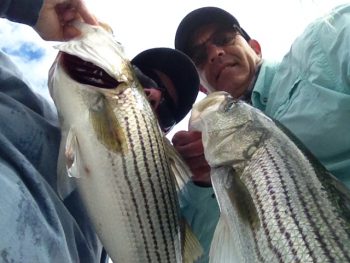 Why would representatives from NJ (and NY and DE) vote in favor of a catch increase when 85% of the quota will go to Virginia, the only state that still allows reduction fishing on the East Coast? Yes, you read that right. Virginia and the industrial fishing company, Omega Protein Inc., will receive 85% of the increase in the Atlantic menhaden harvest. This is yet another sad example of a rigged system that allows Omega Protein to grind up a publicly owned resource and ship it to China for fish farm food. Meanwhile predators like striped bass and bluefish that rely on menhaden as food are completely disregarded.

Instead of working to increase the catch to the benefit of one company or state, why not work for a more equitable split of the quota between states? The reality is that if the quota was split more fairly, the commercial fishery would be able to operate more efficiently and sustainably. The bait netters of New Jersey would be able to work well into November like they used to, and Omega Protein would catch fewer fish in the Chesapeake Bay, a striped bass nursery.

We can look at this another way. If the bunker populations are as healthy as industry claims, then why do other states need Jersey bunker for bait? Why does New Jersey-based Lund’s Fisheries send bunker-packed 18 wheelers hundreds of miles to Maine and Florida for lobster and crab trap bait? The answer is simple. Unfortunately, bunker, or pogie’s as they are called in New England, no longer swim in local waters. The historic range of the Atlantic menhaden is from Maine to Florida, but the head and the tail of the entire population is missing. The schools that were once off of New England are just now showing small signs of recovery, but only after the catch cap was put in place. South Carolina, Georgia and Florida have yet to see a significant increase in abundance. More than a hundred fish factories used to operate up and down the coast, but now there is only one left, in Reedville, Virginia.

If we apply conservative management of menhaden, and we leave enough fish in the water for all the predators, including bait fishermen, then our East Coast ecosystems AND our fisheries will flourish—a win-win. We are all in this together, and with just a little moderation, nature will work her magic and the fish will come back. Sadly, our representatives do not seem to get that.