As part of the ongoing red snapper debate, various “anglers’ rights” organizations frequently tout the superiority of state fisheries managers, when compared to their counterparts at the National Marine Fisheries Service (NMFS). 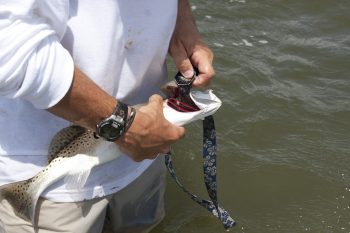 One such organization, the Coastal Conservation Association (CCA), has frequently expressed its support for H.R. 3094, legislation that would strip NMFS of all authority to manage red snapper in the Gulf of Mexico, and transfer such authority over to a panel composed exclusively of state fishery managers. In an effort to justify their position, CCA argued that, “Through their highly successful management of species like red drum, speckled trout, snook and numerous others, the states have demonstrated that they can effectively manage fisheries for both sustainability and access.”

However, in the case of speckled trout, saying that state management is “highly successful” is patently untrue.

The health of the speckled trout stock is determined by its spawning potential ratio (SPR). SPR is calculated by dividing the number of eggs that an average fish in the current population can produce by the number of eggs that an average fish could produce if the population wasn’t subject to any fishing at all. Thus, the SPR of an unfished population is 100%, while the SPR of a population that is subject to fishing will be some smaller number, determined by the rate of fishing mortality.

It is generally believed that, depending on the species, an SPR between 20% and 35%, or perhaps a bit more, will maintain a stock at sustainable levels, while anything less than 20% could lead to sharp declines in abundance. 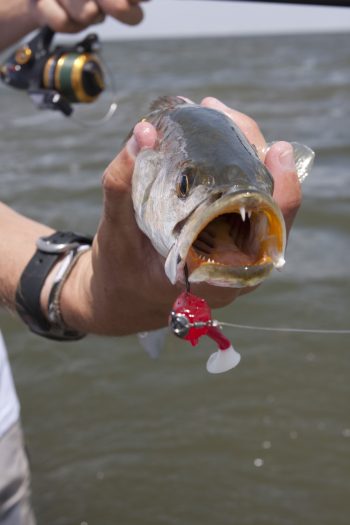 The SPR of Mississippi’s speckled trout stock is a mere 10.2%.

Mississippi regulations allow anglers to take home 15 speckled trout, which must be at least 13 inches long, on each day that they choose to go fishing. The 15-fish bag limit has remained unchanged for the past 20 years, while the 13-inch minimum size was actually reduced from 14 inches in 2007.

Such regulations remained unchanged even after the stock began to decline after 2009; state managers made no effort to impose more restrictive regulations in an attempt to stop the stock’s slide and begin its recovery.

Facing a depleted stock, Mississippi fisheries managers have finally expressed a willingness to impose regulations that might allow the speckled trout to recover. But now, instead of relatively mild restrictions that might have been enough to halt the decline when it had first begun, managers will have to cut the recreational harvest in half if they want to assure the stock’s recovery.

The decline of Mississippi’s speckled trout stock, and state fisheries managers’ tardy efforts to begin its recovery, are troubling enough. However, speckled trout in Louisiana seem to be following a parallel course.

Louisiana regulations are even more liberal than those in Mississippi. Anglers may keep 25 speckled trout each day, and the minimum size is a mere 12 inches (although somewhat more restrictive rules are imposed in the southwestern corner of the state). Such regulations were adopted in 1987; since 1981, the SPR of Louisiana’s speckled trout has never exceeded 20%, and has fallen as low as 8%.

A biologist with the Louisiana Department of Wildlife and Fisheries admits that, “The current limits, biologically speaking, are designed to maximize angler yield while not putting the stock into a condition where we may see recruitment overfishing.”

It is defined as “The rate of fishing above which the recruitment to the exploitable biomass becomes significantly reduced. This is characterized by a greatly reduced spawning stock, a decreasing proportion of older fish in the catch, and generally very low recruitment year after year. May lead to stock collapse if prolonged and combined with poor environmental conditions.”

Louisiana guides are already noting that larger, older speckled trout are becoming scarce. One complained that “On an average day, we’re throwing back between 50 and 150 fish” that fall below the 12-inch minimum size. “My theory is that the fish aren’t getting a chance to grow up. The minute that they hit 12 inches, they’re getting killed.” 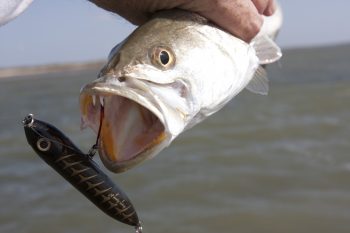 That guide went on to say that, at one time, his clients occasionally caught speckled trout weighing between 6 and 8 pounds, and that 5-pounders were relatively common, but “You don’t see them anymore. You just don’t. The fish get killed before they have a chance to grow up.”

So it appears that at least one element of recruitment overfishing, a declining number of older fish in the catch, is already occurring in Louisiana. Even so, state fishery managers don’t believe that a “complete collapse” will ever occur because speckled trout mature when still very young, and a relatively small population can produce an adequate number of eggs.

State managers’ treatment of speckled trout in Mississippi and Louisiana provide key insights into how Gulf of Mexico red snapper might fare, should management authority ever be taken away from NMFS and given to the states.

The Magnuson-Stevens Fishery Conservation and Management Act (Magnuson-Stevens), which currently governs red snapper management outside of state waters, mandates that “management plans shall prevent overfishing while achieving, on a continuing basis, the optimum yield from each fishery.” “Optimum” yield, in turn, “is prescribed as such on the basis of maximum sustainable yield from the fishery, as reduced by any relevant economic, social or ecological factor; and in the case of an overfished fishery, provides for a rebuilding to a level consistent with producing the maximum sustainable yield…”

That certainly isn’t what’s going on in Louisiana, where managers “walk a tightrope between getting full public use out of a renewable resource and harming a fishery at least in the short term,” trying to keep harvest just low enough to prevent recruitment overfishing, and avert a stock collapse.

Unlike NMFS, state managers are not legally required to “prevent overfishing” at all.

That’s particularly dangerous in the case of red snapper, which mature late and don’t enter their most productive egg-producing years until nearly 10 years old. Overfishing, which reduces the number of older, larger fish in the population, would have a serious adverse impact on the snapper’s spawning potential.

Furthermore, Magnuson-Stevens requires that “management measures shall be based on the best scientific information available.” States are bound by no such standard, a fact that’s evident in the case of speckled trout.

“evaluating the status of the spotted seatrout stock Gulf-wide is problematic because different states have different conservation standards…Louisiana has adopted a SPR value of 18% as their conservation standard…[Florida’s] management objective is a transitional SPR value of 35%. Florida’s conservation standard was chosen in an effort to increase both the number of older, larger fish in the spawning stock and angler satisfaction…Texas does not use a “conservation threshold” associated with any one stock measure…Rather, a broad-based, more holistic approach is used. Management objectives are: 1) to allow fish to spawn at least once before entering the fishery, 2) to prevent growth overfishing, and 3) to provide for a quality and/or trophy fishery…”

When three different states take three very different approaches to managing the same species, it’s clear that at least two of them can’t be adhering to “the best scientific information available.” The fact that Louisiana apparently adopted an SPR of 18% as a conservation standard, and then does nothing when the SPR of the speckled trout stock drops to half of that level, speaks volumes about the importance of science to state management efforts. 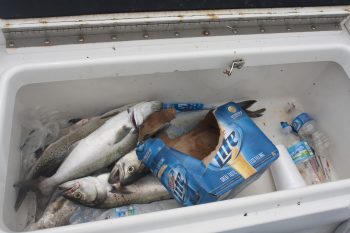 Should red snapper management ever be transferred to a panel of state fisheries managers, it’s not hard to predict that the same sort of chaos will ensue. One or more states will try to “maximize angler yield,” and push the stock to the verge of collapse, eliminating most of the older, larger fish from the population as they do so. Others will use subjective criteria to manage the stock, and avoid the discipline imposed by hard data. And one, maybe two, will be like Florida, and try to use good science and maintain a stock that is healthy and includes some older, larger fish in the population.

Right now, NMFS’ approach to red snapper management has been successful. The stock, which had an SPR of 4.2% in 2005, is rebuilding nicely, and is now about halfway to the target SPR of 26%.

Red snapper anglers have a choice.

They can let NMFS continue its efforts, and expect to see the red snapper stock fully restored around 2032. Or they can turn management over to the states, and let them fail the red snapper as badly as they have failed speckled trout.

When you look at it that way, there is really no choice at all.