Capt. Dave Monti with a summer flounder (fluke) caught off Rose Island, Newport in August. Fluke catch limits will likely be cut 30% next year as the spawning stock biomass (SSB) has been down for six years.

This year the summer flounder (fluke) season has received mixed reviews in the Northeast… some fishermen thought fluke fishing was good, others felt it was way off, it is still too early to tell as all the data is not in.

Angler Mike Swain of Coventry, RI an avid private recreational fluke fisherman said, “Fluke fishing is way off compared to last year. We killed them off Newport, RI into September last year. This year we’re lucky if we land two or three fish on an outing. Last Thursday a commercial rod & reel fisherman caught only three fish at Block Island.”

In late August things slowed down with summer flounder even at the East Fishing Grounds and wind farm area off Block Island. Fishing had been great there; then it got very spotty. Bob Murray who is a recreational and commercial rod and reel fisherman said, “We have done well fishing Block Island and the East Grounds earlier in the summer, now it is off a bit with a number of dogfish there some days.”

The truth is that the summer flounder spawning stock biomass (SSB) is down and has been down for six years. 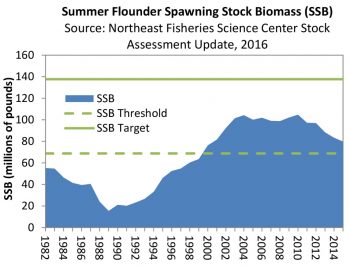 Summer flounder (fluke) spawning stock biomass (SSB) has been on the decline for six years (click image for larger version).

The Atlantic States Marine Fisheries Commission (ASMFC) and the Mid-Atlantic Fishery Management Council (MAFMC) announced on August 15th that they modified specifications for summer flounder reducing catch limits in 2017 for both recreational and commercial fisheries by about 30 percent coast-wide.

The 2016 assessment update indicates that summer flounder has been on a downward trend for the past six years. Fish managers have taken action with 30 percent reductions proposed for 2017, both recreational harvest limits and commercial quotas. How this will play out with state regulations for 2017 remains to be seen, but no doubt more conservative regulations for 2017 are on the way.

The Commission’s actions are final and apply to state waters but how they are implemented is to be determined. The cuts will not be welcomed by fishermen.

Capt. Rick Bellavance, president, of the Rhode Island Party & Charter Boat Association said last year, “Thank God we have fluke fishing to fall back on. With striped bass reductions the past couple of years we could at least take our customers fluke fishing.” The for-hire sector (as well as private anglers and commercial fisherman) will defiantly feel the pitch of fluke reductions particularly since striped bass was reduced, and no one knows if there will be any relief with black sea bass regulations.

In 2015, fishing mortality exceeded its threshold (the level beyond which overfishing is occurring) by 26%. The 2015 estimate of spawning stock biomass (SSB) is at 58% of the biomass target, and only 16% above the threshold.

The ASMFC said in a press release, “If the summer flounder stock were to fall below the threshold, it would be considered overfished, requiring the development of a rebuilding plan to reduce fishing mortality and rebuild stock biomass. These results appear to be driven largely by below-average recruitment, an underestimation of the fishing mortality level in the last years of the assessment, and declining biomass indices.”

In spite of commercial and recreational fishermen having to take a large reductions next year, I am thankful that we have a strong Magnuson-Stevens Act in place that gives NOAA, its Marine Fisheries Service and its regional councils the authority to regulate fishing outside the three-mile limit and take steps to the Atlantic States Marine Fisheries Commission to limit fishing in state waters. Without these controls we would likely overfish summer flounder and have a tragicly depleted fish stock. Implementing reductions now (even with last year’s reductions) provides hope that we can rebuild summer flounder as we have in the past.

I support a strong MSA and National Marine Fisheries Service. Without NOAA controlling fishing in federal waters, states may take things into their own hands, like the Gulf States are trying to do. Louisiana Congressman Garret Graves is the primary sponsor of H.R. 3094, which is a bill that would strip the National Marine Fisheries Service of its authority to manage red snapper in the Gulf of Mexico outside the three-mile limit, and to turn that authority over to the five Gulf States.

This bill sets a bad precedent and, as history has proven, a state’s self-interest and not the interest of the fish takes over when states manage fisheries without any national or regional oversight. What is to stop other states, like the East Coast states, banning together (as the Gulf States have done) and decide to keep fishing summer flounder stocks to the point that they are overfished badly with no chance of rebuilding in the near future.

Although we may be handed commercial and recreational reductions for summer flounder next year, I am pleased that we have a strong national fishing law in place and hope the House bill (H.R. 3094) that the Gulf States have in Congress does not pass.