And the recreational fishing community needs to weigh in

As fishermen, particularly those of us who spend a good amount of the season offshore, we should all be acutely aware by now that things are likely going to change. If you aren’t, this is your heads-up.

Rarely does a week or two go by where I don’t get some sort of notice about seismic testing, natural gas islands, wind power, cable laying, sand mining, dredging, beach replenishment, etc.

I mean, consider this – there have already been eleven wind energy leases off the Atlantic coast. And right now, there is a lease under consideration encompassing 127 square miles off of Long Island! That’s pretty significant.

I’m not saying this sort of development in particular is terrible. In fact I think it could actually be good if sited correctly (for the record, I think the NY Wind Energy area is). But I’d be lying if I said it didn’t scare me a little. 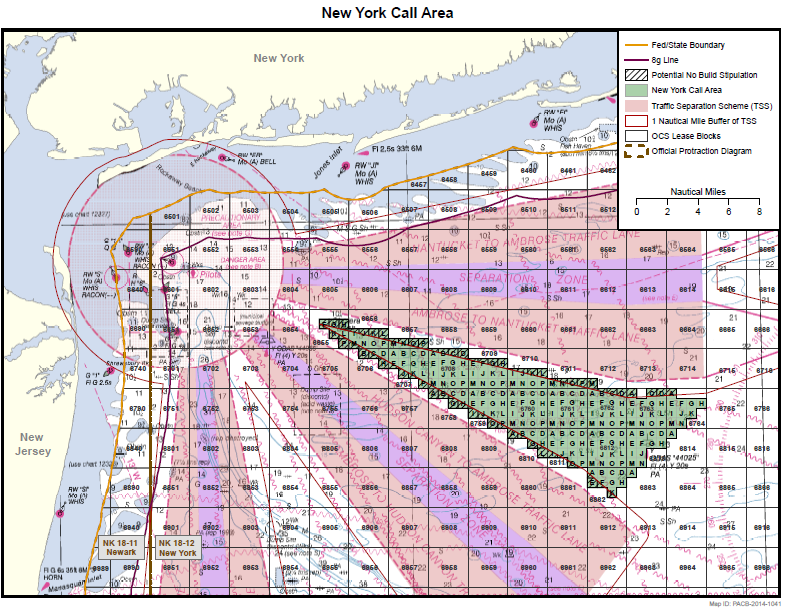 These sorts of proposals for industrial use of what I once considered “our” oceans are coming, and they are coming quickly.

To think that this kind of thing won’t affect us is just foolish. And to think that we can just push back on some of these things we might not like, after the ball is already rolling, and have them go our way is equally naive.

And so, there needs to be a well thought out, coordinated way to properly plan for them…ensuring such development occurs in the least impactful places. Such a plan has to include a way to allow for input from stakeholders such as recreational fishermen, and full consideration of their concerns. Given the dozens of state and federal agencies that currently make such decisions, and the general lack of coordination among them, this historically hasn’t been the case.

Well over a decade ago, our nation’s leaders had the foresight to acknowledge all this, and born in 2010 was a National Ocean Policy, which included, amongst other things marine spatial planning recommendations.

Back in June I wrote about the genesis of this plan and what it means: ‘National Ocean Policy’ and What It Really Means for Us. This is probably worth a quick read if you want some background. For the purposes of this blog, though, the important takeaway is that the policy separated the nation’s coastlines into regional planning areas, giving the regions the power to create their own marine spatial plans.

And so the Northeast and Mid-Atlantic States formed regional planning bodies, and began writing regional plans a couple of years ago with substantial input from their region’s stakeholders. A draft of the Northeast plan was completed in May and is out for comment until July 25 and a draft of the Mid-Atlantic Regional Ocean Action Plan was released the first week of July and comments are due September 6.

Above and top: offshore wind farm in the UK

The draft Mid-Atlantic plan, obviously the most relevant for me, outlines a series of actions on how federal and state agencies, tribes, and the Mid-Atlantic Fishery Management Council can better collaborate to “ensure healthy, productive, and resilient marine ecosystems and sustainable ocean uses in the Mid-Atlantic, including state and federal waters off Virginia, Maryland, Delaware, Pennsylvania, New Jersey and New York. ”

According to the Executive Summary, the two goals of this plan are:

All of this is pretty damn significant if you are someone like me that makes a living off fishing.

The release of the Mid-Atlantic Regional Ocean Action Plan draft provides us a really good opportunity to weigh in. And absolutely, we should weigh in.

Where I believe we really need to focus our comments on is “Ecologically Rich Areas” or ERAs. I wrote about this back in February: On Protecting Those Go-To Spots. In short, one of the world’s foremost marine geospatial ecology scientists has been working with researchers to identify the Mid-Atlantic’s most important “ecological” areas. The plan includes a draft “Framework for Identification of Ecologically Rich Areas,” noting that places are important for different reasons like they have vulnerable or rare marine resources or because they have high species abundance.

As the title of that blog suggests, what we are really talking about here are those “go-to” spots. You know exactly what I mean if you spend more than a few days out on the water each year. Those spots that always seem to hold life. It’s intuitive that such areas should be protected from development that is likely to disrupt them.

I have to be very clear here because the usual, less informed people will try to imply that this is some sort of backdoor way to put large swaths of ocean off limits to fishermen. Saying an area is ecologically important certainly doesn’t mean non-destructive activities can’t occur there. But hey man, we probably don’t want to build a wind farm, or sand mine, or lay cable in such ecology important areas right? I mean really just knowing where these areas are is important, because it helps managers make better decisions on what should or should not occur there.

We really should insist that the regional plan commit agencies to protect such areas. And we should insist that the final plan be clear on when all work to identify ERAs will be completed with a commitment to build on work that’s already underway. Plus, we should see a full listing of draft ERAs online on the Mid-Atlantic Ocean Data Portal so that anglers and everyone else can comment and provide their take on them.

Lastly, we also need to insist on the inclusion of a mechanism in the plan that requires a regular evaluation on whether the plan is achieving the goal of informing decisions and helping maintain ecosystem health.

I guess overall though, we should support the plan in general. It’s a huge step in the right direction… for ocean users like us, for the ocean environment and for the things that live in it.

The reality is that, for better or worse, I built my life around the things that frequent ecologically rich areas. It would be devastating to me, both financially and personally, if an offshore developer came in and royally screwed them up. So their protection in perpetuity is important to me – in more ways than one.

If you feel the same way, you need to weigh in on this.

Throughout July, the Mid-Atlantic Regional Council on the Ocean (MARCO) will be hosting a series of open houses to gather public feedback on the draft plan. The schedules for the remaining meetings are listed below. It would be worthwhile for anglers to go to these meetings to share your opinions. You can also send comments via email directly to the Mid-Atlantic Regional Planning Body.