I know, such an over-coined phrase, but it certainly has some meaning in several different capacities.

As we wrap up another successful halibut season off the Oregon Coast, it never ceases to amaze me how much there is to learn about our fisheries right under our noses.

Stop me if you’ve heard this before, but when I was just learning about all the outdoors had to offer, I had most of my outdoor experiences in Pennsylvania, where my grandfather took me trout fishing and out to the country at dusk to look for whitetail deer in the fields surrounding his “camp.” Every sportsman in Pennsylvania had a “camp,” that was really a deer camp that they religiously pilgrimaged to every winter to go whitetail hunting. With Pennsylvania as my only known destination to hunt and fish (as a first grader), I was literally pricing motor homes in preparation for my move out east, as soon as I got my driver’s license, which wouldn’t be for another decade.

Then, I learned all that Oregon had to offer, albeit several years later. It wasn’t long before I had immersed myself in all fishing-related reading material. I cast aside my homework to read about all the lakes, rivers and streams I could fish as an Oregon resident. Have you ever heard of anyone excited to read the Oregon fishing regulations? Yea, that’s how consumed I was.

As one starts to learn about all the options you have as an Oregonian, you only get more perplexed as to whether you head north, south, east or west. Do you fish at the crack of dawn (of course you do!) or do you wait for the tide to get right. Your options are near limitless.

Well, once I learned about a halibut option in Oregon, it sealed the deal; I WAS going to be a 6th generation Oregonian for all my life, no two ways about it. A halibut trip out of Newport was likely the first fishing trip I paid for out of my own pocket, and worth every penny. Not only did I get to fish for this high dollar “white gold,” an iconic species that I thought one could only catch in the cold waters of Alaska, but I had a chance at salmon too, on the same trip! I remember the trip like it was yesterday, even though it was over 25 years ago. 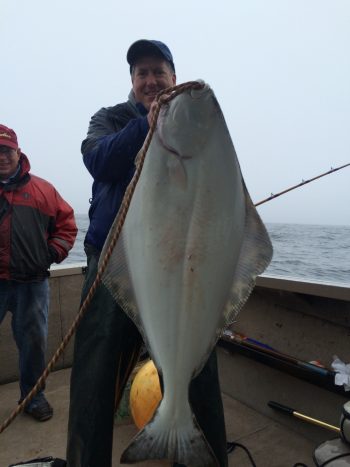 Well, with the good fortune of meeting some really cool people in my job at the Northwest Steelheaders, my good friend Bill Kremers took us out earlier this month and we had a great trip, yielding five nice halibut (four of them over 40 inches) by 9:45 a.m. We even had a double, landing them both, releasing some nice lingcod and finishing up our morning with a 48 crab harvest in the nearshore. May I say again, only in Oregon!

So I may be under-educated on the life history of halibut but from what I’m told, it has a pretty unique lifecycle in our offshore waters. Of course it’s fascinating, at least to me. Fisheries expert Jim Martin, whom I’ve written about before, stated to us during this trip that our Pacific halibut don’t have a great recruitment strategy in our coastal waters. Many of the halibut larvae that are spawned off our coast get lost in the shelf currents and never successfully make it as adults to our recreational or commercial fisheries. That’s precisely why our more southern populations are managed quite conservatively compared to British Columbia and Alaska, where by far, the larger populations of fish reside.

Also, Oregon halibut rarely achieve the large size that their northern cousins do. About 33% of Oregon’s halibut landings are between 31 and 34 inches, weighing between 13 and 17 pounds. Older fish are more fecund, which obviously also contributes more to the success of the species. We have an all-depth and nearshore season with the all-depth (deeper water) typically more productive than the near-shore fishery. I have caught these delicious fish in both fisheries with my closest nearshore fish coming from the green can, just outside of the entrance to Tillamook Bay, while I was targeting fall Chinook one September. I know of halibut caught and released in Tillamook Bay itself, as well as the lower Columbia River out of Astoria, but those are extremely rare catches.

The bottom line is, however, fishery managers everywhere seem to be more willing to adopt conservative seasons for unique species such as halibut and white sturgeon. The conservation of white sturgeon has cost me my full-time living as a fishing guide, but I don’t want to be the one responsible for a species that has been in existence for longer than the dinosaurs. It’s responsible management and one that the Magnuson-Stevens Act is modeled after. Population estimates for fish, especially wide-ranging marine species, is tedious and expensive. Most species go long periods of time without being assessed, so a conservative approach to management is the wise choice, no matter how good they taste. Bon Appetit!

10 comments on “Just for the Halibut”