New England Anglers Wait for Pogies to Return to Boston 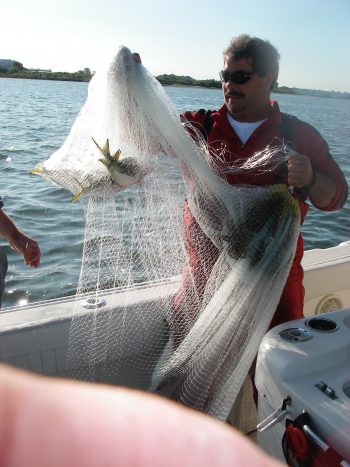 I vaguely remember the adults talking about menhaden fishing when I was a boy. Around Boston where I grew up and learned to fish, we call them pogies (not to be confused with porgy, aka scup). In other places they are known as bunker. According to the old guard at the 67-year-old Massachusetts Striped Bass Assn., the best years anyone can remember for menhaden in Boston Harbor were the late 1970s and early 1980s.

As I matured into a seasoned angler I fell in with a crew that specialized in using live bait to fish for trophy striped bass & bluefish. I vividly remember the mid-to-late 1990s when my fishing partner Capt. Mike Bousaleh and I would work a floating 100-foot gill net for as many as four hours just to get a very small amount of these most precious live baits. The effort was definitely worth it because we won way more than our fair share of tournaments and, quite frankly, found great satisfaction learning about these fish and seeking out the remnants of what was once a vibrant population in our local waters.

Another memory I have from the mid 1990s is my friends from Virginia and South Jersey finding my tales of all night quests to get merely a baker’s dozen of bunker unbelievable. They fished in the one place that still had a healthy population, and their reality was a few minutes with a cast net and then let’s go fishing. What they thought was a robust population was what MA anglers saw as a collapsing stock. A lot to learn from that contradiction in observations, but this blog is about menhaden.

Anyone who knew me back then is not surprised that I became a zealot advocating for the protection of all types of bait or forage fish. I have a deep belief in both democracy and giving something back. Sometime around 1996 I started going to fisheries meetings. I could go on and on with stories of the many failed efforts by myself and others like Ken Hinman of Wild Oceans who have been fighting for menhaden conservation for a lot longer than I, but all that changed in 2012. 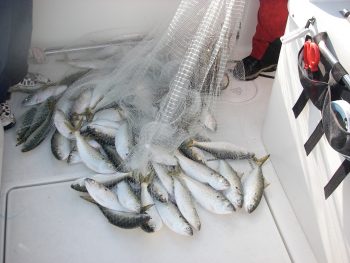 In 2012 after a coast wide effort by a coalition that included recreational, commercial & environmental organizations all working together, the Atlantic States Marine Fisheries Commission (ASMFC) passed Amendment 2 to the Atlantic Menhaden Management Plan. For the first time in modern history this species was to be managed by a total allowable catch or hard quota, and a fishery that was in decline for many years finally had promise of rebuilding. And rebuilding is exactly what is going on.

Over the past four years there has been an easy to follow growth in both the range and abundance of menhaden along the Mid-Atlantic coastal inshore grounds. Reports of increased menhaden, better fishing and bigger fish are more common each and every year. In 2014 for the first time in a long time there were whales right off the beaches of North Jersey and New York City. Simply put, there is a growing wall of menhaden abundance that in four short years has made its way to Rhode Island. In addition, multiple government fisheries surveys are seeing large numbers offshore apparently closing in on New England.

You don’t need a Ph.D. in fisheries biology to predict that in 2016 the rebuilding should reach the waters south of Cape Cod and the islands of Martha’s Vineyard and Nantucket. Knock on wood with fingers and toes crossed, but if ASMFC doesn’t screw it up, the MA South Shore and Boston Harbor might just experience increased menhaden within the next year or two. In the historic port of Gloucester on the MA North Shore there was a menhaden processing plant in the 1970s. Might this rebuilding reach all the way into the state of Maine? It surely could. 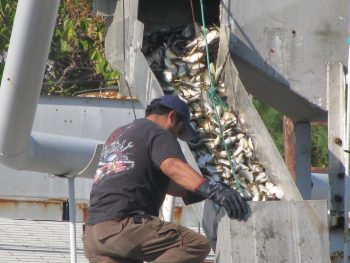 There are some fisheries advocates besides myself that believe a return of menhaden to the Gulf of Maine might be one of the most important events to ever happen to what was once some of the most productive fishing grounds on the planet.

Of course it’s easy to get drunk with HOPE, but truth of the matter is that there was a menhaden stock assessment in 2015, and there are those that want to ramp up the harvest by a large amount. It’s hard to deny that there is enough science to justify consideration of an increase in menhaden quota. There is also just as much science to back up the commitment ASMFC made to the public back in 2012.

That commitment was to improve the “guestimate” allocations set in 2012 and to install what are known as “ecological reference points” (ERPs). ERPs are basically technical metrics added to the quota setting equation in order to make sure that our first priority is to leave enough forage in the water to feed our ecosystem as we (hopefully) continue to rebuild menhaden. That is the same ecosystem that supports our predator fish, our fishing communities and our collective spirits. For now I must say “thank you” and “good job” by the ASMFC. Please keep up the good work.

If you also care about the management of Atlantic menhaden, please watch this space for more as the next round of management decisions ramps up over the summer.