For more than a decade, Wild Oceans has been a champion for a broader ecosystem approach to managing marine fisheries beginning with protections of predator-prey relationships. On April 4, the National Oceanic and Atmospheric Administration (NOAA) issued the Final Rule protecting dozens of prey, or forage, species in the eastern Pacific. 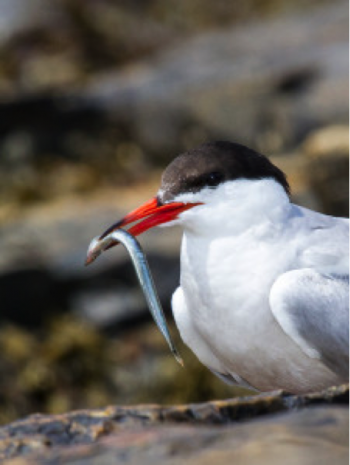 A Common Tern with a Sand Lance, via Wikipedia

“This is a huge victory that will protect the ocean ecosystem from the bottom up,” says Theresa Labriola, Wild Oceans project director on the west coast. “Predatory fish from salmon to tunas, along with marine mammals and birds, will benefit from this important and timely action.”

The rule bans fishing on a suite of forage fish that are not currently targeted by commercial fishermen. The protected species include Pacific sand lance, Pacific saury, several types of smelt, herring, and squid. The protections were first approved last year by the Pacific Fishery Management Council, responsible for managing offshore fisheries from Washington to California. The rule sets a first-of-its-kind precedent for protecting important prey species from fishing until we understand the ecological effects of exploitation.

The California Current forage base is essential to the health and productivity of the ecosystem overall, including valuable commercial and recreational fish that feed on little fish. Scientists with the Lenfest Forage Fish Task Force agree, saying forage fish are worth twice as much left in the water as prey than they are to fisheries that harvest them directly.

Fisheries for forage species compete directly with the needs of wild predators and associated fisheries. So the final rule comes just in time. Unexploited prey species are being sought and targeted to meet the growing demand for aquaculture feeds.

Meanwhile, the Pacific sardine stock has dramatically declined, and the Pacific Council will meet in Vancouver, Washington next week to consider closing the commercial fishery for a second year in a row. “The sardine closure could result in a shift to other forage fish,” says Labriola, “but this recent action will prevent them from targeting the newly protected forage species.”

Theresa Labriola is the West Coast Fisheries Project Director for Wild Oceans, pursuing legal and grassroots solutions to environmental pollution and the over-exploitation of our natural resources. She has worked as a fisheries advocate in the northeast, building successful campaigns to restore our oceans by protecting forage fish like menhaden and herring.
View all posts by Theresa Labriola →