For too many years, biologists tried to manage fish in a vacuum. They focused on the impacts that harvest had on each species; they paid little heed to how the same harvest affected the greater marine ecosystem.

That is slowly beginning to change. The Pacific Fishery Management Council adopted a pioneering amendment to its fisheries management plans, which will protect currently unfished and unmanaged forage fish species. The Mid-Atlantic Fishery Management Council is following suit. Both are important steps that acknowledge that fish are part of a web of life that extends from single-celled plants out to the great whales.

The shift to such an “ecosystem management” approach will be the next big step forward in fisheries management. Researchers are already trying to produce population models that consider the interrelationships between various species.

Unfortunately, some people either misunderstand, or intentionally misinterpret, the ecosystem management concept, and use it as justification to overexploit relatively abundant populations or kill off undesired species. 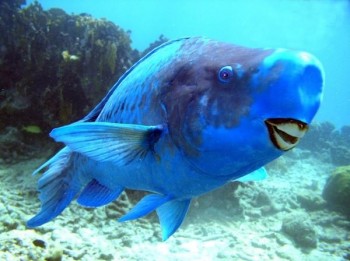 A few years ago, a friend and I were fishing aboard a Florida Keys party boat. At one point, my friend’s bait sunk closer to the bottom, where it was quickly taken by a bright blue parrotfish. He unhooked the fish and was about to drop it back over the side when the mate took it out of his hands, saying “Those fish are no good. They eat the reef.”

One could argue that, in his efforts to protect the reef, the mate was practicing ecosystem management on a small scale. Unfortunately, by killing parrotfish, he was really doing harm. An abundance of parrotfish is actually critical to the health of the reef, as they spend most of their time cleaning harmful algae off living coral.

So anyone planning to practice ecosystem management should first get the relationships right.

That was recently illustrated on a much broader scale, in the mid-Atlantic region, where some scientists believed that, after overfishing depleted the population of large coastal sharks, a trophic cascade echoed through the food web.

They hypothesized that, because large coastal sharks are one of the few predators of cownose rays, the decline in the shark population allowed the rays to proliferate and the resultant overabundance of rays then decimated oyster and bay scallop beds.

It was a classic tale of an ecosystem gone awry.

In response, the State of Virginia tried to reduce the number of cownose rays in Chesapeake Bay, and promoted the rays as seafood. The slogan “Save the bay, eat a ray” was coined, and articles on cooking rays began appearing on food-oriented websites. Virginia Sea Grant, in conjunction with the Virginia Institute of Marine Science, conducted a study on harvesting rays for use as food, and possibly also for bait, pet food, pharmaceuticals and leather clothing.

The purported “need” to kill rays also spurred the growth of a bowfishing industry, in which archers either chartered boats or ventured out in their own vessels to shoot cownose rays, which were, as often as not, discarded. Bowfishing tournaments targeted pregnant rays entering the bay to reproduce. Such tournaments have been criticized by both conservationists and animal-rights groups, but remain legal; watermen deem them necessary to maintain shellfish stocks.

However, a recent paper entitled “Critical assessment and ramifications of a purported marine trophic cascade” questions whether a trophic cascade ever occurred. It argues that large coastal abundance actually increased at the same time that rays grew more numerous, and that the depletion of the shellfish beds occurred years before the supposed trophic cascade took place.

Furthermore, cownose rays reproduce very slowly; they are biologically incapable of quickly increasing their population. Moreover, any significant increase in the ray population probably couldn’t be attributed to an absence of sharks, which, it turns out, eat very few cownose rays. And cownose rays don’t eat that many oysters and scallops. Their jaws aren’t powerful enough to crush the shells of large bivalves; instead, most of their diet is made up of smaller mollusks that aren’t commercially fished, plus worms, echinoderms and crustaceans.

It turns out that “Save the bay, eat a ray” was pretty bad advice.

That shouldn’t come as a surprise, for as pioneer ecologist Aldo Leopold noted

“The last word in ignorance is the man who says of an animal or plant ‘What good is it?’ If the land mechanism as a whole is good, then every part is good, whether we understand it or not. If the biota, in the course of aeons, has built something we like but do not understand, then who but a fool would discard seemingly useless parts? To keep every cog and wheel is the first precaution of intelligent tinkering.”

Thus, managers should avoid any actions that would in any way reduce the richness and diversity of a marine ecosystem.

Unfortunately, fishermen still often argue that the best way to protect one species of fish is to reduce the abundance of another.

When the Atlantic States Marine Fisheries Commission’s Striped Bass Management Board (Board) discussed a cut in the striped bass harvest, Russell Dize, a Board member from Maryland, opposed such action, claiming that

“We’ve got so many striped bass that it’s affected our crab-catching industry. We are probably down to a low ebb last summer on crabs.”

Mr. Dize apparently never considered that the “crab-catching industry,” and not the bass, might have contributed to the blue crab’s decline.

“The biomass for sea bass is so much higher than what we have recorded. They’re wiping out other species. If we don’t act soon you’re going to lose the lobster fishery throughout the northeast. We need an emergency opening of both the commercial and recreational black sea bass fishery…”

In fact, the black sea bass biomass is just about on target, and a recent benchmark stock assessment of American lobster does not implicate sea bass predation in the southern New England stock’s collapse.

There are still far too many people who would rather shrink healthy fish populations, to supposedly reduce their predation of depleted stocks, rather than accept the harvest reductions needed to rebuild depleted stocks to healthy levels.

Such an approach is a perversion of ecosystem management that can only lead to an emptier ocean.

While an empty ocean would exhibit its own kind of balance, it would not serve anyone well.